A night of praise, inspiration and fellowship 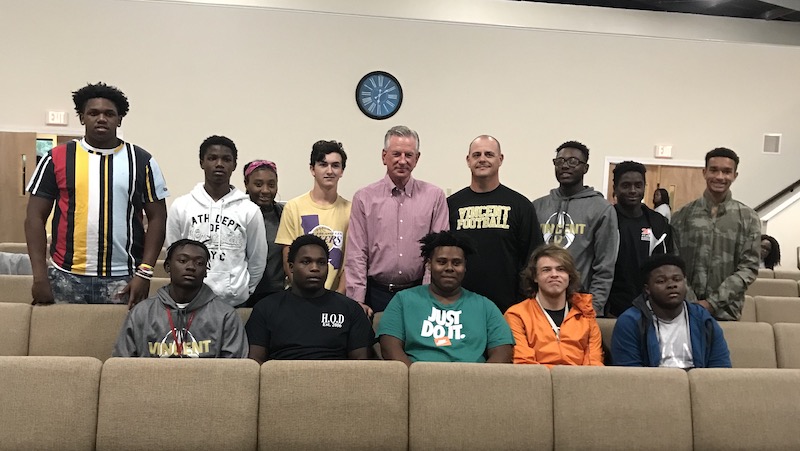 Always looking for ways to motivate and inspire young people comes with the territory when you are a head football coach. Wednesday, Oct. 9 gave Vincent Middle High School coach Lucas Weatherford a score in the “provide inspiration department.”

Liberty Christian Church in Harpersville, pastored by Theoangelo Perkins, welcomed Tommy Tuberville, former coach at Auburn University, for “An Evening with the Coach,” an evening that started with an amazing musical performance by the church praise team.

After a brief introduction by Perkins, the guest speaker talked football, teamwork, perseverance and the importance of work ethic. But before getting into the nitty gritty of what playing football can teach about life, Tuberville said, “This is the most fun time of your life.”

Then, he said, “Life is not simple. Always remember, you often learn more from your failures than from your successes.”

The coach used storytelling to drive points home to the mostly young audience of football players from both Vincent Middle High School and Childersburg High School. He told stories about NFL great Ray Lewis and the infamous Dwayne “the Rock” Johnson, both of whom he coached while at the University of Miami.

Making the point about perseverance and setting goals and executing a plan, he told of Johnson losing his position to Warren Sapp and ultimately his career to injury. “The Rock” had a back-up plan. Chuckling, he said, “It worked out pretty well for him.”

Tuberville then showed a more serious side, telling the players, “There are no time outs in life; use your time wisely.” He offered a warning about cell phone usage, “They occupy your time; don’t let them control your life.”

Talking about life lessons from playing sports, Tuberville said, “You are learning how to work with others, discipline, hard work and trust in others.”

“It’s always good when our players can hear a college coach reiterate what we preach to them on a daily basis,” Weatherford said.

For the parents in the audience, Tuberville encouraged involvement. “I like to see parental participation,” he said. Then, he jumped right into the importance of his faith and putting God first. Coaching, like life, can stress a family. “That’s why you need God,” he said.

“If you are not reading the Bible you are missing out on life,” said Tuberville.

The coach could not get away without multiple photos with student football players. Some were also asking for autographs on Auburn hats and jerseys.

The church provided a spaghetti dinner for the student players who enjoyed some after church fellowship. Martaviun Lawson, a senior, said, “He is a very inspirational man. He’s never let any of his players not live up to their potential.”

Pastor Perkins’ summary: “It’s all about the message!”