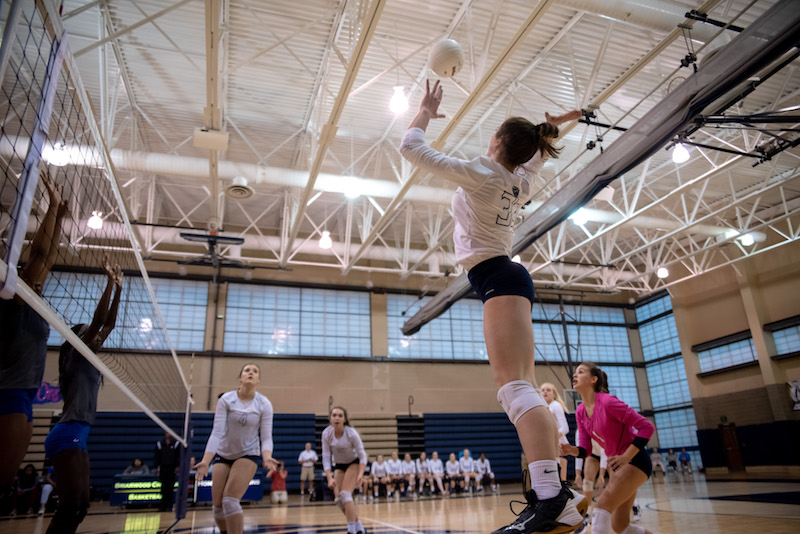 The Briarwood volleyball team fell to Ramsay in the Class 5A, Area 8 tournament on Monday, Oct. 21. (Reporter photo/Keith McCoy)

NORTH SHELBY – The Briarwood Lions weren’t able to overcome a difficult Ramsay team in the 2019 Class 5A, Area 8 tournament on Monday, Oct. 21, as the Rams went on to sweep the Lions 3-0 to claim the championship.

Briarwood still advanced to the regional round of the playoffs thanks to winning the regular-season area title, but got a lower seed and a tougher draw because of the loss.

The Lions actually beat Ramsay 3-1 during the regular season to make a difference in the final area standings and earn the right to host the area tournament, but going into the tourney, the Rams had redemption on their minds.

For a while in the opening set, Briarwood held its own in a tight battle, eventually taking an 11-10 lead.

But Ramsay answered with a 6-1 run that opened up big 16-12 advantage for the Rams.

Briarwood battled back to within a point at 17-16, but the Rams again found another run, eventually outscoring the Lions 8-2 the rest of the way for a 25-18 first-set victory.

That strong play from Ramsay seemed to have the Lions out of sorts going into the second set, while the Rams were getting perfect set after perfect set. Their continued impressive play led to a strong 9-3 lead out of the gate in the second set.

Having dug such a big hole, Briarwood was only able to get as close as five points the rest of the set, as Ramsay pulled away for a 25-13 victory and a 2-0 lead.

But Briarwood has fought all year, and the Lions continued to show that fight in the third set.

The Lions battled much closer in the early going to stay within striking distance, and late in the set made a move to try and extend the match.

Trailing 22-19, Briarwood showed it wouldn’t go down with ease winning the next two points to make it 22-21.

Ramsay, however, was able to get its composure back and found some easy sets over the next couple of points to win three in a row and close out the match with a 25-21 third-set victory.

Both advanced to regionals despite the outcome, and Briarwood is still a team that can make noise by the fight it has shown throughout this season facing adversity multiple times.