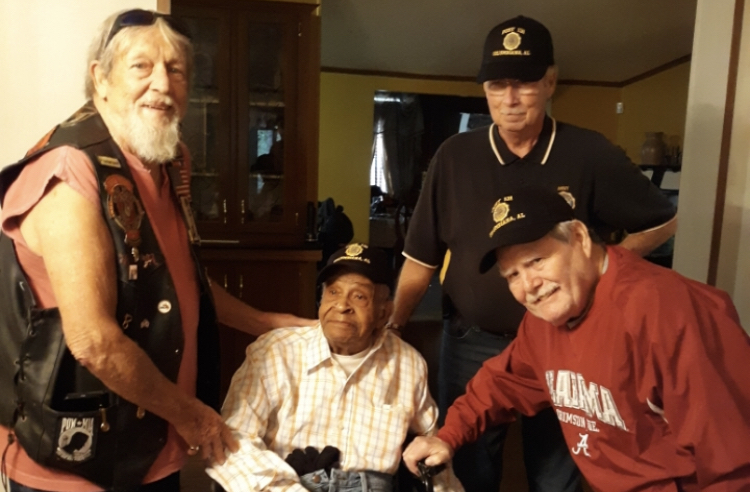 If you talk to the veterans of American Legion Post 131, it won’t be long before they remind you that their number one goal is to be veterans that are helping other veterans.

As they close out the last few weeks of 2019, they are backing up those words with plans for community service on several fronts.
Most recently, they reached out to 103-year-old veteran Charles White.

After learning about White’s service during World War II in a previous column in the Shelby County Reporter, Post 131 decided to make White an honorary member of the American Legion and honor him with a gift for his upcoming birthday trip to see the ocean for the first time.
“We feel it’s very important to recognize World War II vets we have in the community because there aren’t very many of them left,” Post Commander Sam Horton said.
The men and women of the Legion are also working now to raise funds to furnish at least 10 veterans and their families in need for Thanksgiving.

They will be taking orders for smoked hams and smoked turkey breasts from now until Nov. 18 in order to accomplish this goal.
The veterans work fundraisers throughout the year to have funds on hand not only for events like Thanksgiving, but to help with any need a veteran may have in the county.

In fact, on Nov. 9, Post 131 will host a breakfast for all local vets at the Jack’s on College Street in Columbiana.

Veterans are invited to come and have a meal on the American Legion in honor of Veterans Day from 7-9 a.m.

After breakfast, the community is invited to join the veterans to place flags at the Columbiana City Cemetery.
They will also be out in force at the upcoming Monster Walk on Oct. 31, as well as the Shelby County Fair in order to get to know their community better and build relationships with possible new members. At these events, they will also be taking orders for the hams and turkey breasts.
To place an order to help Post 131, reach out to Post Commander Sam Horton at (205) 572-2115.

To learn more about the American Legion, visit one of their monthly meetings held at 200 Mildred St. on the second Monday of each month at 7 p.m.