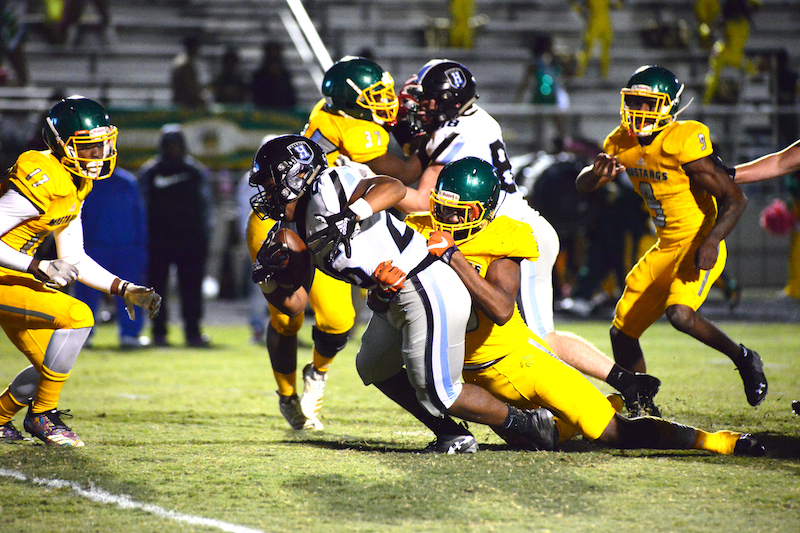 The Helena Huskies will host Pelham looking to take down the Panthers for the first time in school history this Friday. (For the Reporter/Jeremy Raines)

The final week of region play is upon us and there are a couple of teams battling for seeding or a playoff spot, while others are looking for a confident end heading into the playoffs or the offseason.

Helena vs. Pelham (Game of the Week)

The intrigue for this rivalry is always there between Helena and Pelham ever since one school became two in 2014. But over the last several weeks, this matchup has become everything we had hoped for. Pelham, who has never lost to the Huskies with a 3-0 record in this series, has now won three games in a row and is playing its best football of the season. Helena, on the other hand, has locked up its first region championship in school history and is on a current six-game winning streak.

In their last four games, the Panthers’ defense has stepped up giving up 21 or less in each, while the offense has scored 31 or more in three of the last five games. That offensive jump has been due to quarterback Xavier Lankford gaining confidence and running back Gabe Gamble tearing up defenses. But this week, they go up against a Helena defense that is giving up just 19.5 points per game, while the Huskies’ offense has scored 45 or more in three of the last four games. This group of Panthers doesn’t want to be the first to lose to Helena, but this Huskies’ team is more than capable of being the first one to win the rivalry after already making school history a couple of times this season. Helena 35, Pelham 21

Had Oak Mountain won last week, this game would have been for a playoff spot, but now it’s all about pride for the Eagles coming off a tough double-overtime loss to Spain Park. Vestavia has lost two in a row and three of five with the Rebels’ offense scoring 28 or less in the last five straight. Their defense, however, is still giving up just 16 points per game despite allowing 35 the last two weeks. Oak Mountain’s option attack may keep it close for a while in a low-scoring game, but Vestavia’s defense should make the difference. Oak Mountain 14, Vestavia Hills 27

Spain Park made big plays both offensively and defensively to pick up a double-overtime win against Oak Mountain last week. Now the Jaguars get a winless Tuscaloosa County team that is giving up 38.3 points per game and scoring just 17.1. Harrison Barker and this offense should easily be able to pull away in this one, while the defense should have its best game of the season. Spain Park 42, Tuscaloosa County 21

This game had a lot of intrigue coming into the year, and while it will still be a tough battle for Thompson to get its focus and emotions in check following last week’s region-championship win, Hewitt-Trussville has lost four of its last six games. The Warriors, on the other hand, sit at 8-0 this season. While the Huskies’ defense is better this year and has given up 21 or less in the last four games, Thompson’s offense has faced two difficult defenses in a row and has put up 35 and 33 points the last two weeks. The Warriors are still averaging 44.9 points per game, while the defense is giving up just 19.3 and has allowed 23 or less in all but one game this season. Thompson 35, Hewitt-Trussville 14

Chelsea has now lost three consecutive games in heartbreaking fashion by three points or less, while the Calera Eagles have lost seven in a row since their season-opening win. While both are reeling, the Hornets are playing much better football and are scoring 30.5 points per game, while giving up 22.6 points per game. Calera, on the other hand, is giving up 38.1 points per game and scoring just 16.5. The Eagles have been held to 15 or less in four of their last six games and 14 or less the last two weeks. Chelsea’s defense should look more like what we saw from the Hornets early in the season, while the offense should also take advantage of Collier Blair and a passing game that has come along throughout the season. Chelsea 38, Calera 21

Briarwood is now in a three-way tie for first in Class 5A, Region 4 after taking down No. 2 Ramsay 21-20 this past Friday. Whether or not the Lions win a region title might come down to their final game against Class 6A Hueytown, but before that, they’ll have to win at Fairfield on a short week of work after their most physical game of the season. The Tigers are scoring just 23.8 points per game, which benefits a defensive Briarwood team. If Luke Prewett is healthy and plays, the offense should pull away, but even without him, freshman quarterback Christopher Vizzina and several others stepped up in last week’s win. Briarwood 35, Fairfield 20

Coming off their first win of the season, Shelby County showed a lot of poise and fight against Central-Tuscaloosa and will now look to carry that momentum into a rivalry matchup with Jemison. Oddly enough, a Wildcats’ defense that had given up 40 or more points in six consecutive games held Central to just 14 points a week ago. This week, they get a Jemison team that has scored 13 or less in four straight games. Shelby County has lost the last two in the series in tight games and will be motivated this time around on homecoming after its first win. Shelby County 34, Jemison 20

It’s pretty simple for Montevallo this week. Win and take the two seed and home field advantage into the first round of the playoffs or lose and fall to at least a three seed if not a four seed. The good news for the Bulldogs is they finally seem to be healthy again and are taking on a Greensboro team that is 1-7 on the season and scoring just 17.5 points per game. The Raiders have scored eight or less in five of six games this year, including the last three in a row, while the Montevallo defense is playing its best football of the season, having given up 14 combined the last two weeks. That combined with a healthy and dangerous Montevallo offense should be too much. Montevallo 48, Greensboro 16

With a playoff spot on the line, this game is sure to be one of the best of the week between two comparable teams. Fayetteville has the better record at 5-3, but two of Wolves’ wins are over 1A teams, while two are against the same teams Vincent beat and one is against a one-win 2A team. The Yellow Jackets lost this game 35-21 last year despite being the better team going into the matchup. This year, the two teams are even, but I like the progression I’ve seen from Vincent. Vincent 31, Fayetteville 28

It’s been a tough year for the Cornerstone Chargers, but having picked up their first win two weeks ago, they’ll gear up for a game they should be able to handle against Meadowview this Friday. The Trojans are 0-8 this season and have failed to score points in five of their eight games. They’re averaging 5.5 points per game offensively and are giving up 51.4 on the defensive side. Cornerstone 42, Meadowview 6