Chelsea advances to state for 2nd time in school history 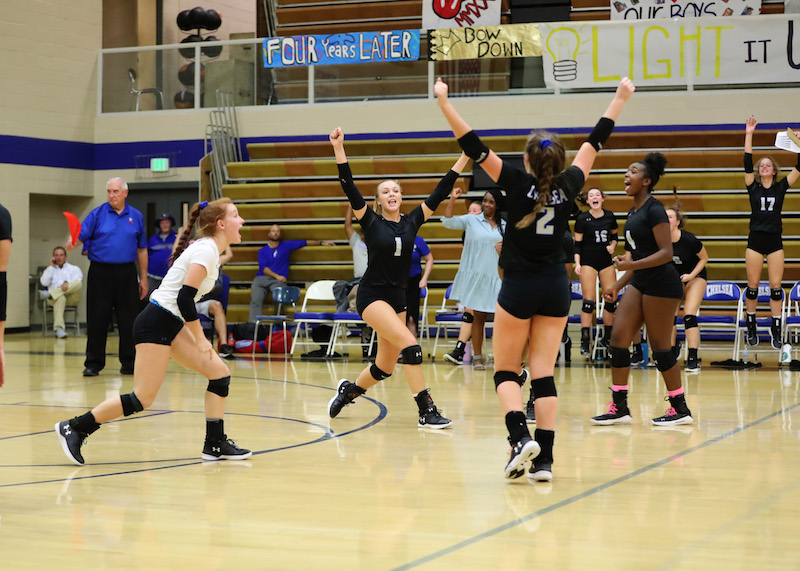 The Chelsea Hornets advanced to the state tournament for the first time since 1996 with two consecutive wins at super regionals. (For the Reporter/Cari Dean)

MONTGOMERY – For the first time in 23 years and second time in school history, the Chelsea Hornets are headed to the AHSAA State Volleyball Tournament after making easy work of both Saraland and Opelika at the 2019 Super Regional tournament in Montgomery on Friday, Oct. 25.

Winning all but one set by double digits, the Hornets beat both opponents in straight sets and outscored the two by a combined 150-80 to complete a perfect day.

It’s a team that had been so close on several occasions to breaking through under head coach Jessica Pickett, winning around 40 games each of the last three years, but the Hornets hadn’t been able to break down that wall.

Two years ago, it was a heartbreaking loss to Helena in the area tournament, and last year, it was a loss to eventual state champion Spanish Fort, which left Chelsea one win shy of advancing.

But through all of that pain came triumph this year and a 2019 team that will go down in history as one of the best in program history.

“They’re hungry,” head coach Jessica Pickett said of her team heading into the season. “Last year seven of them saw how close they were. Spanish Fort has won the last couple of years so it was fun to have that taste in our mouths, but it was disappointing for them. Their goal is to be playing in the state championship, and this year they won’t be satisfied even just making it to state.

“The first thing they talked about leading into this season was losing to Spanish Fort. They didn’t think they played their best. Winning more than 50 games, coming out of a tough area and winning a couple of tournaments wasn’t enough. The girls weren’t satisfied with that.”

It’s a team that established the motto “We over me,” and despite having one of the most talented rosters in the state with a big senior class with experience, it was always about making this year special as a team.

And that was the message going into the area tournament a few nights earlier where the Hornets beat No. 7 Pelham for the second time this season, and it was the same message heading into super regionals.

And their hunger showed.

Against Saraland, Chelsea looked like a team on a mission that was going to destroy whatever stepped in the way. Saraland never was able to get comfortable with the serving of Chelsea and the different attackers thrown their way, while the Hornets were playing their game flawlessly.

And it didn’t stop there.

A team that looked like one of the best this season throughout the regular season, stepped back on the court against Opelika two hours later and picked up right where it left off.

With that same look of determination, you could sense the intenseness radiating off the court, as the Hornets jumped on top 2-0 quickly with set victories of 25-9 and 25-14.

The third set was slightly closer with Chelsea on the brink of school history and Saraland on the verge of having its season end, which led to a more intense and nerve-wracking set for both.

However, the Hornets had been in situations like that several times this year and came through. This time, Chelsea did it again by closing out its perfect day with a 25-20 set victory for a second sweep of the day.

But even with that historic win that punched the Hornets’ ticket to state, this team entered the season saying they wouldn’t be pleased just making it to state, and there are still three more matches standing between them and the ultimate goal of a championship.