Thompson downs No. 8 Sparkman to advance to Elite Eight 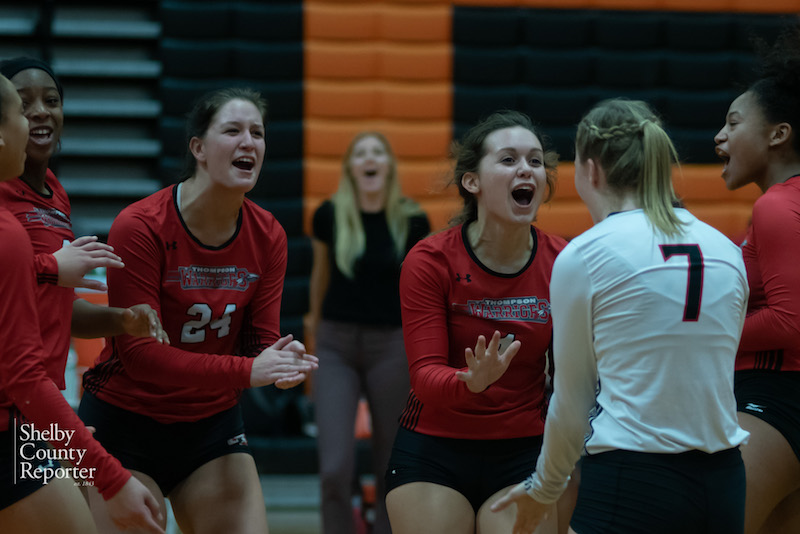 The Thompson Warriors took down No. 8 Sparkman on Friday, Oct. 25, to clinch a spot in the Elite Eight of the state tournament. (Reporter photo/Keith McCoy)

HUNTSVILLE – After falling to Mountain Brook in straight sets in last year’s super regionals, the Thompson Warriors entered the 2019 season grateful for that experience, but determined for redemption

“Last year was something they had never experienced, but now they are comfortable with it,” head coach Judy Green said before the season. “It’s not the way they wanted it to end, but now there is a little extra in the gas tank.”

Since Green took over the team in 2015, Thompson has improved each year going from no postseason berth to losing in the super regionals to now advancing to the Elite Eight.

The Warriors almost took that same demeanor of improvement into the match with the Senators.

Early on, the Warriors struggled to find consistency against Sparkman despite showing flashes that they could be the better team at times.

That consistency struggle, however, was there at times throughout the season and Thompson knew exactly how to respond, which led not only to the biggest answer of the year, but in the biggest match with the season on the line.

One of the better teams this season at bouncing back from a first-set loss, Thompson never panicked and took advantage of the experience on the floor.

Having not only been in the same situation at times this season, but also falling behind last year against Mountain Brook in this same scenario, Thompson knew exactly what to do and what not to do.

The Warriors came back from the 25-19 opening-set loss and handled the nerves much better in the second set. After seeing positive signs, they were able to build off of that, which led to them controlling the pace and tone of the set this time around.

Playing from in front, Thompson was able to make plays down the stretch to close out a slim 25-22 second-set win to even the match at 1-1.

Now, the Warriors had confidence—something that makes them one of the most dangerous teams in the state.

As soon as they get a sense that they’re the better team, the Warriors switch into a different gear, and that showed in the third set.

Off to a flying start in the third set, Thompson had forced the Senators out of their comfort zone, which led to the Warriors pulling away for a dominant 25-16 victory.

Having claimed two sets in a row and coming off a nine-point win in the third set, the momentum was undeniably in favor of Thompson heading to the fourth set.

Sparkman had been put into a pressure-packed situation of having to win the set to stay alive and force a fifth-set tiebreak.

But again, the Warriors were able to play well enough throughout to give themselves a chance at the win late.

With the Senators’ season hanging in the balance on every point down the stretch, the pressure became too much against a confident Thompson team that seemed comfortable over the final few points.

Up 24-22, the Warriors were able to make it official on the next point by closing out a 25-22 fourth set and a third consecutive set win in a row to pull off the 3-1 comeback victory.

With the win, Thompson stayed alive in the North Super Regional and also cemented a spot in the Elite Eight of the state tournament to be held at the Birmingham CrossPlex Oct. 30-31.