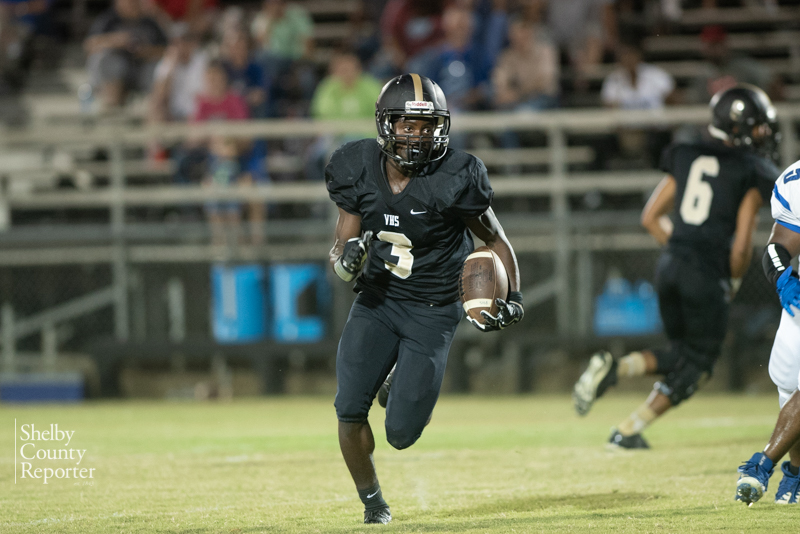 SYLACAUGA – An upset was brewing in Talladega County on Thursday night until a Fayetteville player blocked punt was scooped and returned for a touchdown with roughly six minutes to play, handing the Vincent Yellow Jackets a 14-12 defeat on the road. The loss eliminated Vincent from the Class 2A playoffs.

“I felt we dominated the entire game and couldn’t get a break,” said Vincent Coach Lucas Weatherford. “I’m disappointed, but I don’t want to take anything away from Fayetteville. They played a hard game, and I’m happy for Coach (John) Limbaugh.”

The Yellow Jackets controlled the ball on the ground, collecting 289 yards rushing, including 100-yard efforts by both Ryan Culliver and Tae McGregor.

After a scoreless first quarter, McGregor put Vincent on the board with a 6-yard touchdown run. The extra point was missed, 6-0. Fayetteville answered to take a 7-6 lead into halftime.

Vincent looked to take the lead to start the second half when Treston Smith intercepted a pass and returned it for a go-ahead touchdown, but a penalty negated the score. While not scoring on that series, the Yellow Jackets later took the lead, 12-7, on 10-yard touchdown run set up by a 37-yard quarterback keeper by Will Harris, who finished with 52 yards rushing.

Weatherford says the loss is frustrating but he continues to see improvement from his team in the loss to a 6-3 Fayetteville.

“It’s a slow build. When I came in last year we weren’t competing at all. We had the mentality of as soon as we get down we quit. This year, we’ve lost three close games. If we learn how to handle those situations we may can win those down the road. I think we’re on the right track. It’s frustrating right now but sometimes you have to take the baby steps,” Weatherford said. “I hope my seniors can go out on a high note next week at home.”

Vincent (2-7) will host Asheville on Nov.1 for Senior Night.