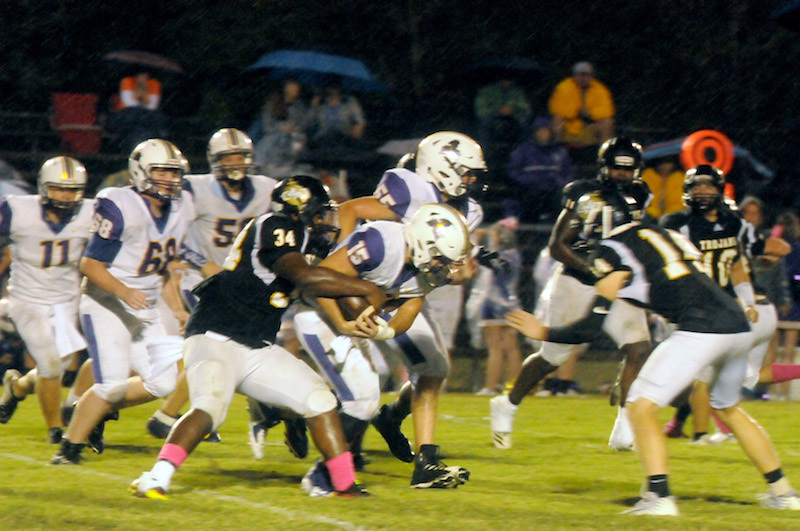 Cornerstone picked up a 34-14 win against Meadowview on Friday, Oct. 25. (Contributed)

By JAMES JONES | Special to the Reporter

SELMA – Meadowview Christian School had a chance to end the school’s decade-long AISA state football playoff drought on Friday, Oct. 25, at Wadsen Field, but visiting Cornerstone Christian School outscored MCS 28-6 in the second half to prevail in a 34-14 win to clinch an AISA state playoff spot.

The Trojans remained winless on the season at 0-8, 0-5 in region play with the loss, while Cornerstone picked up its second win of the season.

“The season hasn’t gone the way we wanted, but we didn’t quit, I’m proud of them,” CCS coach James Lee said.

Bailey’s 4-yard touchdown run, followed by him connecting on an 18-yard touchdown pass to Bryant Talbert were the two scores the Chargers were able to put up to take the two-score lead.

MCS closed the gap to 20-14 on an 18-yard touchdown run from Taylor followed by a Christian Jones pass to Randall Moore for the 2-point conversion.

CCS scored the final two touchdowns, however, to pull away.

“It means a lot for me to get back in the playoffs,” said CCS defensive back John Waugh, who had two interceptions in the game.

Cornerstone will now host Morgan Academy to close out the regular season on Friday, Nov. 1, before taking part in the playoffs a week later.