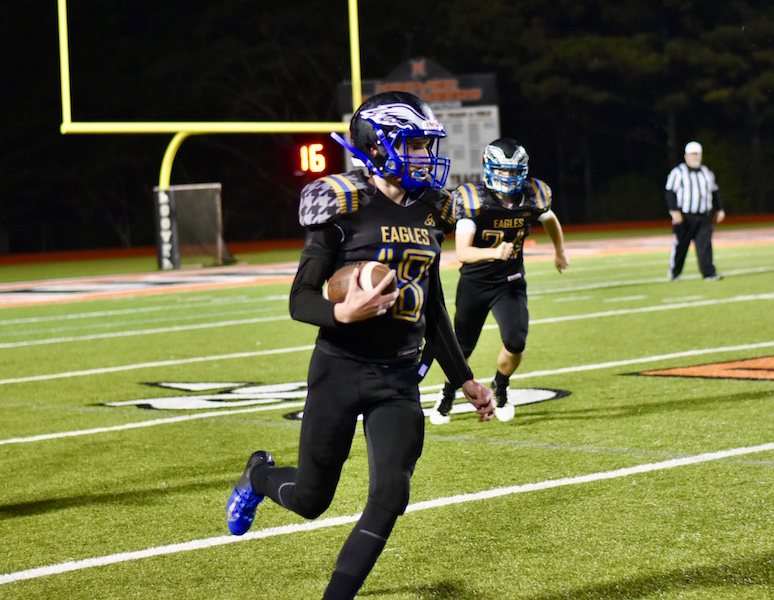 Trinity Christian closed its first season with a dominant win on Friday, Oct. 25. (For the Reporter/Anna Ruth Dorris)

HOOVER – The Trinity Christian Eagles concluded their inaugural season with a home victory against the North River Chargers, 36-14 on Friday, Oct. 25, at Hoover High School, where the game was moved due to weather conditions.

The Eagle offense jumped out to an early lead with a 10-yard scamper by quarterback Brennan Whatley. Whatley next connected with Everson Jones for a 2-yard strike to give the Eagles an early lead they never relinquished.

Running back Isaac Bradshaw carried the load for the Eagles on offense adding a 4-yard touchdown run. Garrett Moore busted a long run of 60 yards to help the Eagle, while Josh Baize added a 75-yard touchdown reception to extend the lead and put the game away.

Aggressive linebackers Matthew Mair and Dylan Weathers led the Eagles in tackles and effectively shut down the Chargers’ offense. In addition to a strong game offensively, Baize added an interception defensively and Willie Wade recovered a fumble to give Trinity control of the ball most of the game.

The Eagles finished the season undefeated in conference play, claiming their first conference title and finishing with a 4-5 record overall.