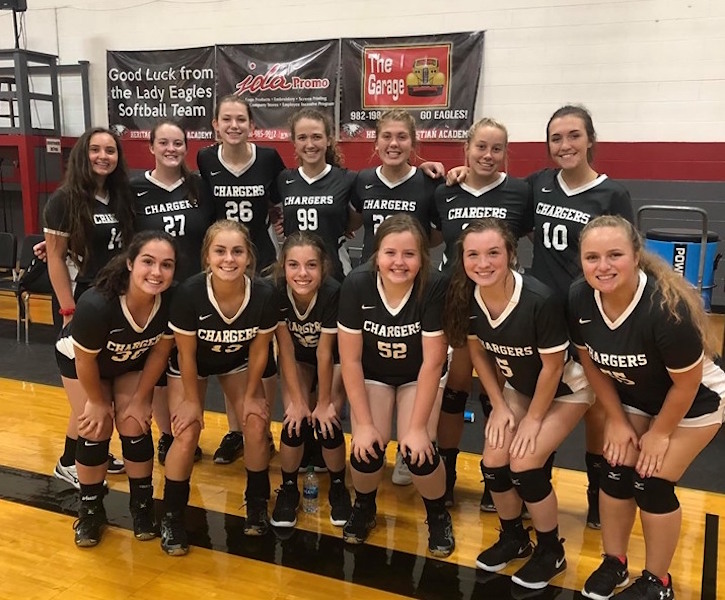 Cornerstone and Coosa Valley both won in the Elite Eight of the AISA state playoffs and will advance to the Final Four on Thursday. (Contributed)

MONTGOMERY – The Coosa Valley Rebels and Cornerstone Chargers will both close the 2019 season on Thursday, Oct. 31, after both advanced to their respective Final Four with victories in the quarterfinals of the AISA playoffs on Monday, Oct. 28.

Competing in Class AA, the Rebels were able to take down Northside Methodist in straight sets, while in Class A the Chargers took down Wilcox Academy in a five-set thriller to advance.

After playing in two tight sets, the Rebels were able to capitalize on their comfortable lead by pulling away for a relaxing 25-16 victory in the third set to complete the sweep.

With the first two sets being 24-23 late, taking advantage of set point both times became key in Coosa Valley taking that early lead and avoiding a 2-0 deficit, which could have caused a different outcome.

For Cornerstone, however, a comeback was necessary.

The Chargers got off to a strong start in the opening set by picking up a 25-19 victory to take a 1-0 lead.

But the momentum quickly shifted in favor of Wilcox, who bounced back with wins of 25-22 and 25-23 in the second and third sets, respectively, to take a 2-1 lead in the match.

Despite the back-to-back losses, Cornerstone was on the verge of winning both sets, so the Chargers hadn’t necessarily lost confidence, but they were now forced to win two sets in a row to keep their season alive.

Somehow, in the biggest match of the season, Cornerstone was able to find its most clutch moment of the season by winning a dominant 25-17 fourth set to force a fifth-set tiebreak.

Having staved off elimination and all of a sudden shifted the momentum in their favor, the Chargers capitalized in the final set. Grabbing an early lead, Cornerstone was able to put together one final push late to pull away for a 15-9 tiebreaker victory to close the Elite-Eight match with a 3-2 win.

The Chargers will now take on Chambers Academy at noon on Thursday, Oct. 21, in the Final Four. Should they win, they would play again at 4 p.m. that same day in the championship.

Coosa Valley will now square off against Edgewood at noon in the semifinals. Edgewood has yet to lose this season with a 25-0 record. The winner of that match will play in the championship at 2 p.m.