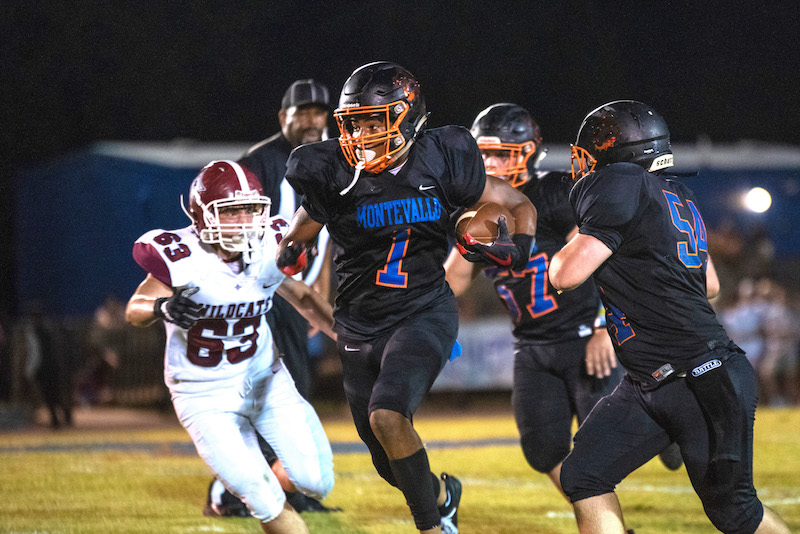 Montevallo receiver J.J. Evans will participate in this year’s Alabama/Mississippi All-Star football game after being announced to the team on Monday, Oct. 28. (File)

Montevallo star receiver and Auburn commit J.J. Evans has been announced as a member of the Alabama All-Star team for the upcoming Alabama/Mississippi All-Star game set for Dec. 14.

Evans joins other county players Trent Howard, Evan McGuire and Jayson Jones as a member of the Alabama team.

Howard, a Briarwood player, McGuire, a Thompson player, and Jones, a Calera player, were originally announced to the team back on Wednesday, Oct. 2, but Evans has now earned a spot on the team after a remarkable last two seasons with the Bulldogs.

Last year, as a junior, Evans posted 74 receptions for 1,706 yards and 18 touchdowns. That yardage total was the second most by any receiver in the state’s history for a single season.

He helped lead Montevallo to a 9-1 regular season during 2018 and playoff berth, while also having to play quarterback late in the season for an injured Malik Inabinette.

This year, while battling injury and missing two games, Evans has posted close to 600 more receiving yards with six touchdowns to this point in the season despite being double covered in almost every game.

Evans has been one of the most dynamic playmakers in the state the last two years, and will join a talented group of players competing in Hattiesburg, Mississippi on Dec. 14, at the University of Southern Mississippi.

His speed and athleticism to go up and grab a ball are the two attributes that make him such a special player, while he’ll also have two of the state’s best quarterbacks throwing to him in the game as well.

With the addition of Evans to the roster, that makes three players from the county competing in the game that are committed to Division I schools. Evans, an Auburn commit, joins future rival Jones as an Alabama commit and Trent Howard as a Georgia Tech commit in the game, while McGuire is also drawing interest from Division I schools.