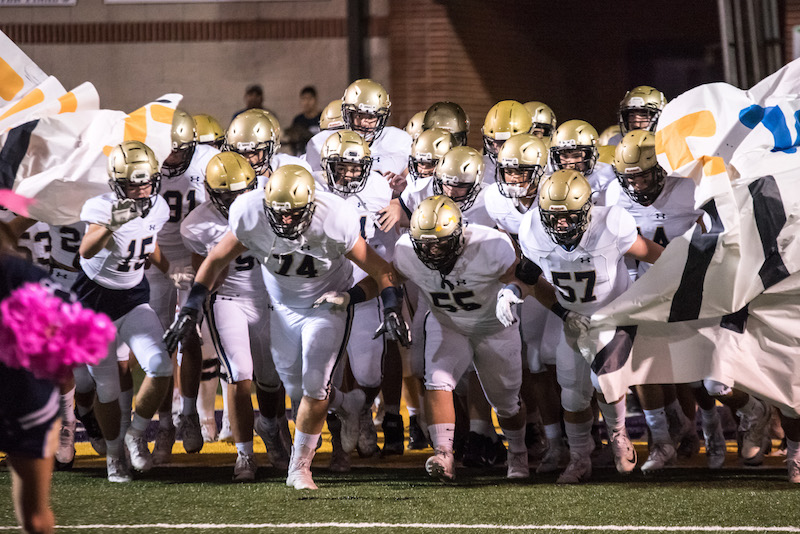 Briarwood will travel to Hueytwon for this week's Game of the Week to close out the regular season. (Reporter photo/Keith McCoy)

In the blink of an eye, it has come and gone. The 2019 football season has shifted from hot summer days to cooler fall nights, and now it’s the end of the road for several teams.

Entering the final week of the regular season, five teams will play their last game of the year as seniors look to go out on top and young players and coaches look to establish momentum heading into next year.

Briarwood at Hueytown (Game of the Week)

Briarwood did what it needed to last week to lock up home field advantage in the first round of the playoffs thanks to a 28-18 victory over Fairfield. But this week, there is still plenty to play for with a matchup against Class 6A No. 3 Hueytown. A win should give the Lions the one seed out of a three-way tie in Class 5A, Region 4 due to the level of competition. But it’s a Golden Gophers team that is 9-0 on the season averaging 39.3 points per game offensively with Alabama commit Roydell Williams at running back, while alxo giving up just 16 points per game. Last year, Briarwood won this game 31-13 last year against an 8-1 Hueytown team. What it comes down to is the decision for the Golden Gophers to play its starters or rest up for round one of the playoffs. Either way, the Lions will give it their all with a strong defense and a growing offense. Hueytown 31, Briarwood 14

Coming off a 35-21 loss to a previously winless team in Tuscaloosa County, Spain Park needs this game badly. Needing some confidence going into next year with several returnees and wanting to send the seniors out with a win, the Jaguars need to close the season with a dominant showing. And it’s a team they should have an advantage over. Shades Valley snapped a five-game winning streak last week with a win against Pell City, but has scored more than 21 points just one time this season. Going up against this Spain Park offense, it will be tough for the Mounties to keep pace. Spain Park 35, Shades Valley 21

Oak Mountain welcomes in out-of-state foe Pace from Florida this Friday to close out the 2019 season. The Eagles have dropped three of their last four after winning two of three, but they get a Pace team that is also below .500 on the season. It should be an entertaining matchup that is a complete tossup. It’s tough to go against the home team though. Oak Mountain 35, Pace 28

Despite Helena having won seven games in a row and Calera having lost eight in a row, this game could be more interesting than a lot expect. The Huskies have already secured the region title after finishing region play undefeated and are now headed to the postseason, while this marks Calera’s final game of the season. That said, Helena is just too talented this year, while the Eagles are giving up 37 points per game and scoring just 14.7. I expect the Huskies to try and build an early lead to give their starters as much rest as possible. Helena 42, Calera 20

Pell City has won all of two games this season and has been held to a combined three points the last three weeks. If Chelsea plays its starters in this one, the Hornets should easily be able to follow up the team’s first shutout since 2010 with another strong defensive performance this week. But also wouldn’t be surprised if preparation for a tough Oxford team started early with this game having no impact on the playoffs. Chelsea 28, Pell City 10

While many might consider this a disappointing season for Shelby County, the Wildcats will have the chance to put together their first three-game win streak in one season for the first time since 2009 this Friday. Coming off two wins in a row, Shelby County will now take on a 0-9 St. Clair County team that has scored seven points or less in seven of their nine games and have given up 40-plus points in seven of nine as well. The Saints are averaging 7.6 points per game on offense and are giving up 45.9 points per game. The last two weeks, Shelby County has given up 14 and 19 points defensively, that’s key. Shelby County 35, St. Clair County 14

Montevallo pulled off a comeback last week against Greensboro to lock up home field advantage in the first round of the playoffs thanks to a 32-26 victory. Now, the Bulldogs will take on a scrappy 7-2 Lincoln team this week. The Golden Bears have won their last two games by a combined 69-7, but entered last year’s game with the same record and lost this game 42-24. Montevallo has been inconsistent at times this year and I know they want to be healthy going into the playoffs this year, so I wouldn’t be surprised by a Lincoln win in this one, but I’m going to pick it as if it were a game in the middle of the season. Montevallo 34, Lincoln 28

It’s tough to play up a classification much less two classifications. That’s exactly what the Vincent Yellow Jackets have to do to close out the season, as they play host to Ashville. Vincent is coming off a very emotional 14-12 loss to Fayetteville that kept the Jackets out of the postseason, while Ashville has lost eight in a row. But last year, Ashville entered in the same scenario and won 56-12. That jump up two classifications is just too much. Vincent 20, Ashville 42

The Cornerstone Chargers have won two of their last three games, and despite those being the only two wins, they’re headed to the playoffs. Now, the Chargers have one more chance to grab a win before taking on unbeaten Crenshaw in the first round of the postseason. This week, Cornerstone gets a 3-7 Morgan team that has lost three in a row. Scoring 21.8 and giving up 29.2, Morgan still seems to have a slight edge over the Chargers who are scoring 13.2 and giving up 36.4. Cornerstone 20, Morgan 35

It’s state championship time for the Evangel Lightning. Looking to add another ACSC Championship to their trophy case, the Lightning will square off against rival Ezekiel, who they beat 80-35 a few weeks ago. This game always tends to be close at least once a year, and that’s just one of two losses for Ezekiel, but the Lightning’s offense has been too much for many teams all season, including the Knights, and should be again. Evangel 65, Ezekiel 35