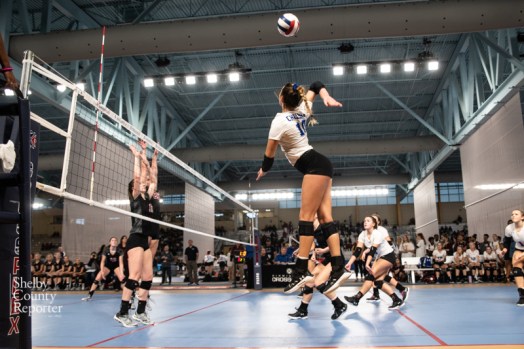 The Chelsea Hornets lost a tough match with Hartselle in the Elite Eight of the state tournament on Wednesday, Oct. 30. It was the second time in school history the Hornets had advanced that far. (Reporter photo/Keith McCoy) 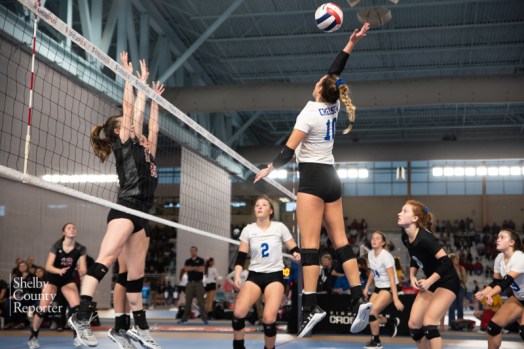 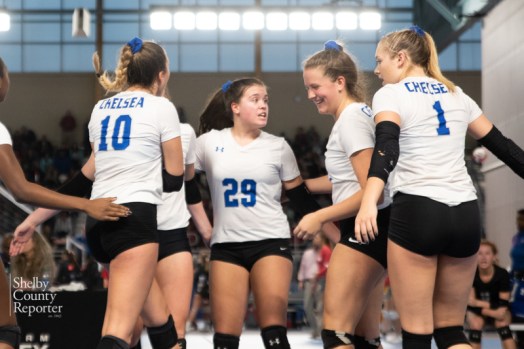 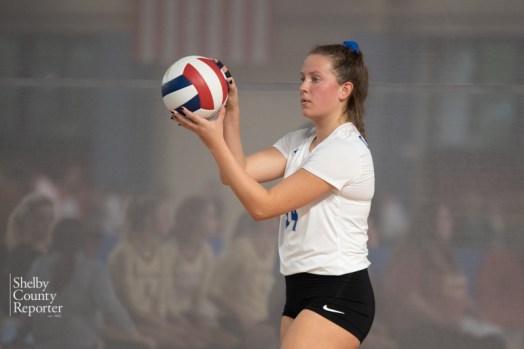 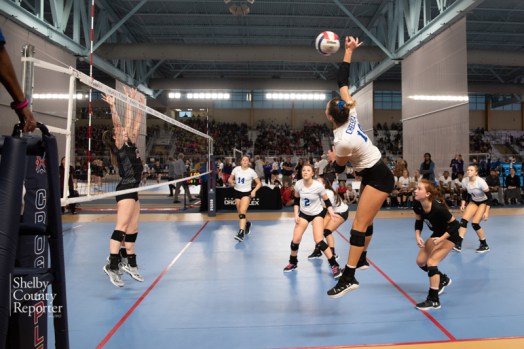 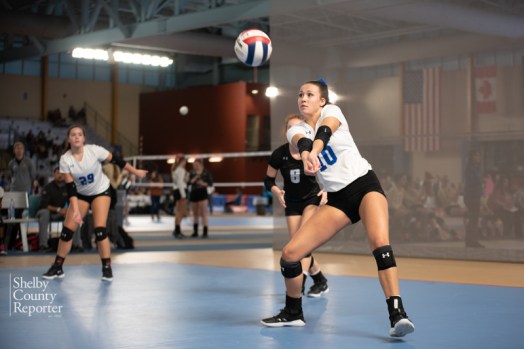 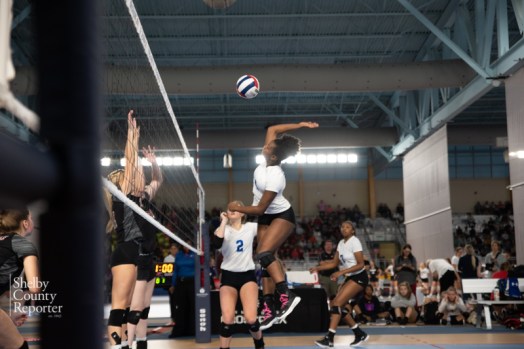 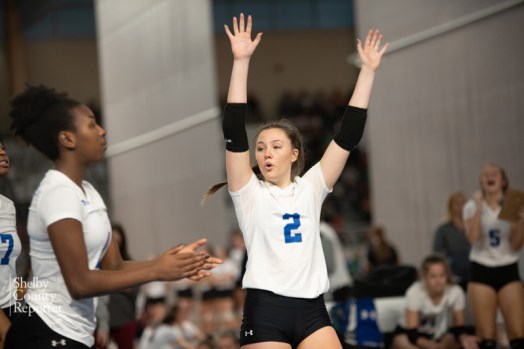 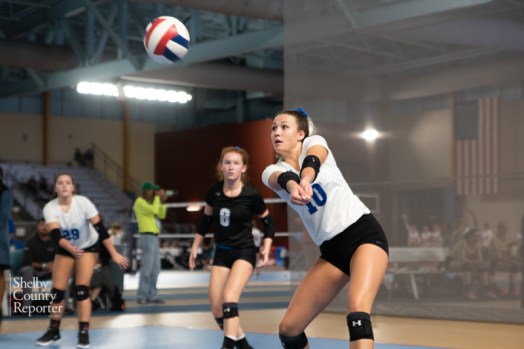 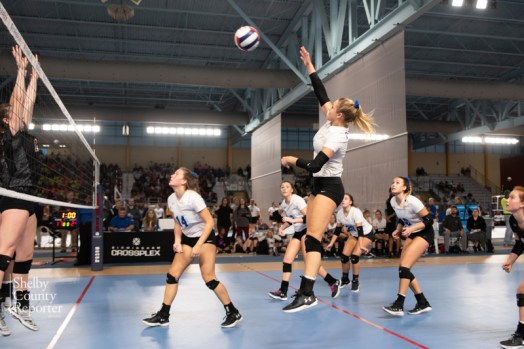 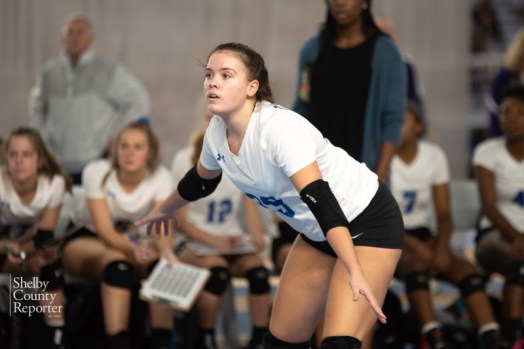 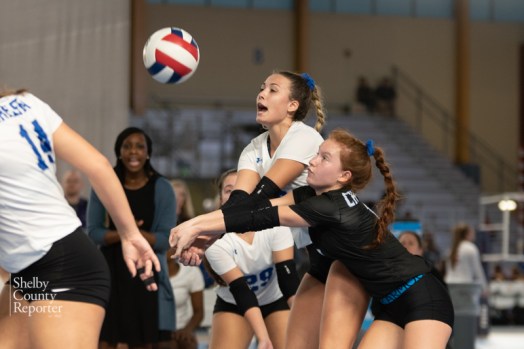 BIRMINGHAM – As the final point was won, Chelsea’s volleyball team gracefully walked off the court having lost a tough four-set match to Hartselle in the Elite Eight of the State Tournament on Wednesday, Oct. 23, but the pain was there.

With a group that had finally punched through to the state tournament for the first time since 1996 and the second time in school history, the Hornets had aspirations of a state championship, but instead fell short in the Elite Eight with a 3-1 (19-25, 26-24, 25-23, 25-20) loss to Hartselle.

“These girls have worked hard to get to this point,” Chelsea head coach Jessica Pickett said trying to hold back tears. “It’s just emotional because obviously that was the last game with these seniors. Stuff didn’t fall our way and that’s what I told them. It just wasn’t meant for us to win because several of those sets could have gone either way.”

After stepping off the court and beyond barriers separating the playing surface from the waiting area, the emotion overcame each player. Not just one, not just the seniors, not just the coach, but all of them felt the excruciating pain of coming up short of their goal of a state championship.

A team that was bonded together with one goal as one unit. And while the outcome didn’t end in the favor of Chelsea and the breaks didn’t go the Hornets’ way, it’s a team that will be remembered for making history because of the what they accomplished together.

“I’m proud of them,” Pickett said. “They pushed past it and got here. We have something to build on because this team set the precedent.”

And a big reason for that new precedent is thanks to a senior class including Zoe LaBreche, Victoria Schmer, Bailey Drew McIntyre and Sarah Moore, all of whom played a major role not just this year but the last several years.

“These seniors have meant a lot to me,” Pickett said. “I’ve always said they’re like my daughters because I don’t have a daughter. We talked today about them finding their purpose in life, whatever that is. It’s bigger than volleyball to me. We’ll all remain close and they’re going to be great women in society. They mean the world to me. Those are my babies.”

That’s what made the loss so difficult to handle. Not just that it was their last time stepping on the court together, but that this group had experienced the heartbreak the last two years.

But for the Hornets to have done something only one other in school history has, it’s a moment those four seniors will never forget.

“They wanted to do something for their community and I believe they did,” Pickett said. “Yeah they fell short of their goal of a championship, but they worked hard together.”

In the match itself, Chelsea jumped out to a strong lead in the opening set and pulled away for an easy 25-19 victory to take a 1-0 lead in the match.

It looked like that comfortable level of play had carried into the second set after the Hornets jumped in front again at 6-4, but the rest of the set was back and forth.

The Tigers eventually took a 22-20 lead, and while Chelsea answered by regaining the lead at 24-23, giving them set point, Hartselle went on to win the final three points in a row to claim a 26-24 set win.

At that point, the match was even at 1-1, but the Hornets still looked like the better team.

That continued to be the case early in the third set, as they took a strong lead, but the Tigers stormed back to eventually take a 14-11 advantage. Again, Chelsea went on to play well the rest of the way, eventually tying the set at 23-23, but the Tigers found the late points winning the final two for a 25-23 victory.

Now up 2-1, Hartselle was a set away from the Final Four, while Chelsea’s season was hanging in the balance.

That pressure for Chelsea led to the Tigers eventually pulling in front 12-7, and then again by five at 18-13, but the Hornets responded. They came back to make it a two-point set at 20-18, giving themselves a chance.

“They could have rolled over in that final set, but they kept fighting,” Pickett said. “That’s just who they are as people. They don’t just roll over, they keep fighting.”

It was a heartbreaking end to the season, and one that will be tough to swallow for a while, but the 2019 Chelsea volleyball team will always be remembered, not for that loss, but for what the team did for their city and school.

“This year meant a lot to our program,” Pickett said. “We’ve been wanting to get here for forever and we’ve fallen short a couple of years. But I think this sets the standard for our program moving forward.”