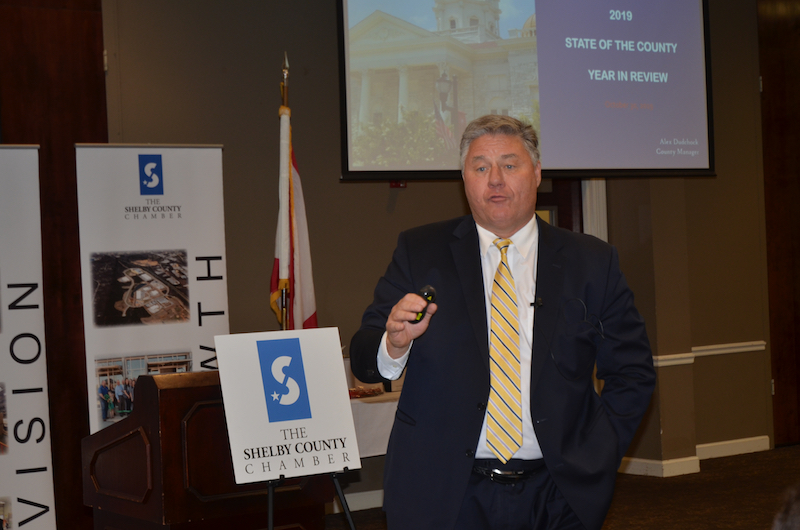 Retiring Shelby County Manager Alex Dudchock addresses those in attendance at the "State of the County" community luncheon hosted by the Shelby County Chamber on Wednesday, Oct. 20 at the Pelham Civic Complex. (Reporter Photo/Graham Brooks)

PELHAM – In his final “State of the County” address before retirement, Shelby County Manager Alex Dudchock recapped the progress the county has made in 2019 and what’s in store in 2020, as hundreds gathered for the monthly community luncheon sponsored by the Shelby County Chamber on Wednesday, Oct. 30 at the Pelham Civic Complex.

Dudchock, who announced he would be retiring as county manager a few months prior after more than 30 years of service to Shelby County, gave several updates at the luncheon pertaining to the county’s growth, unemployment rate, per capita income changes, capital projects and initiatives and more.

In a PowerPoint presentation to chamber investors, Dudchock pointed out that the population growth in Shelby County has grown from 213,605 to 215,707 for an increase of 2,102 people in the past year, the unemployment rate is down 2.1 percent and there’s been a 5.4 percent growth in real and business personal property values.

Dudchock emphasized the critical importance of Shelby County residents to participate in the upcoming 2020 Census after Shelby County was tied for the best participation in the state for the Census in 2010.

In 2019, Dudchock pointed out that Shelby County has either finished or are currently working to finish the following capital projects:

–A new athletic field and track at Eagle Park in Calera.

–Assistance with a playground and pavilion at Chelsea Community Park.

–A new restroom building at Joe Tucker Park in Helena.

–A pedestrian bridge and project management services with a second bridge at Shoal Creek Park in Montevallo.

–A conference room on Lay Lake at the 4H Center.

–A new county services building at the Shelby 280 Center.

–The construction of a new intersection and roundabout design for Shelby West Corporate Park and the County Airport.

–A new pavilion, parking lot and walking trail at the lake at Shelby West Corporate Park.

–Renovations and additions at the Shelby County Courthouse.

–Modifications to the Butch Ellis Community Services Building in Columbiana.

–A major expansion project at the Human Resources building in Columbiana.

–The construction of a 350-seat theatre and fine arts facility at the University of Montevallo.

–A number of projects and improvements at Oak Mountain State Park.

Dudchock will officially retire from his duty as Shelby County Manager on March 31, 2020 as the Shelby County Commission selected Chad Scroggins on June 24 of this year to fill in the role.

To conclude the luncheon, Dudchock told a story to chamber members of how his parents disapproved of him accepting a position to work for county government a number of years ago, but as he looks back, he said it’s one of the best decisions he’s ever made.

“I have been blessed to be empowered by people who get it and have allowed us to have talented people that work for us, set high expectations of ourselves and others and it’s truly been my pleasure to work for y’all,” Dudchock said.

For more information on the Shelby County Chamber, visit Shelbychamber.org.