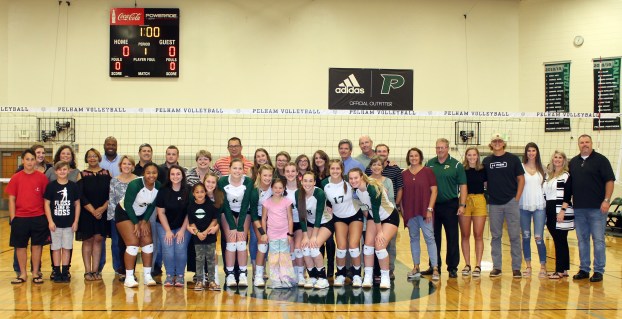 Pelham High School Volleyball seniors and their families celebrate senior night for the Class of 2020.

“Tuesday is Senior Recognition night. Would love it if you could be there and take a few pics of us before 6pm game and stay to cheer them on against Helena.”  This message from Tammy Anderson, Pelham High School Senior Ashley Anderson’s mom delighted me.

This year’s PHS Volleyball team captured my heart with their homecoming parade float. Their sign read, “Fishin’ for State” and the float was fashioned to look like a boat. Volleyball Coach Robinson seemed as happy as his players to be aboard their boat float. Knowing that Robinson is an avid fisherman, I wondered if the fishing theme was his idea, but Anderson assured me that the girls came up with the idea. Knowing this team as an eclectic and creative group, I’m sure they did.

Entering the gym lobby before the pre-game senior night festivities, I found Tammy Anderson completing a state-themed table and decorations for the Volleyball team. The girls and their parents were in and out—both admiring the table and prepping for the game. A few parents dropped off dishes. When I asked if they’d help plan the table, one parent said, “Tammy Anderson is the mastermind. I am happy to be doing as I was asked.”

Watching the team during warm-ups, I snapped a few photos of intense spikes. Impressed by the girls’ spiking ferocity, I recognized the distinctive hairstyle of one of my students. When the student turned toward me, I was surprised not to recognize her. Later, learning that this was indeed my student who I usually see smiling, I realized how assuming their game faces transforms these young women into serious athletes.

On October 22nd, the Class 6A area eight high school volleyball tournament takes place at Chelsea High School. Pelham plays Helena at 5 p.m., and at 6:30, they hope to be playing for the area title. PHS Volleyball has a long-standing tradition of excellence—and this year’s team—continues the legacy.