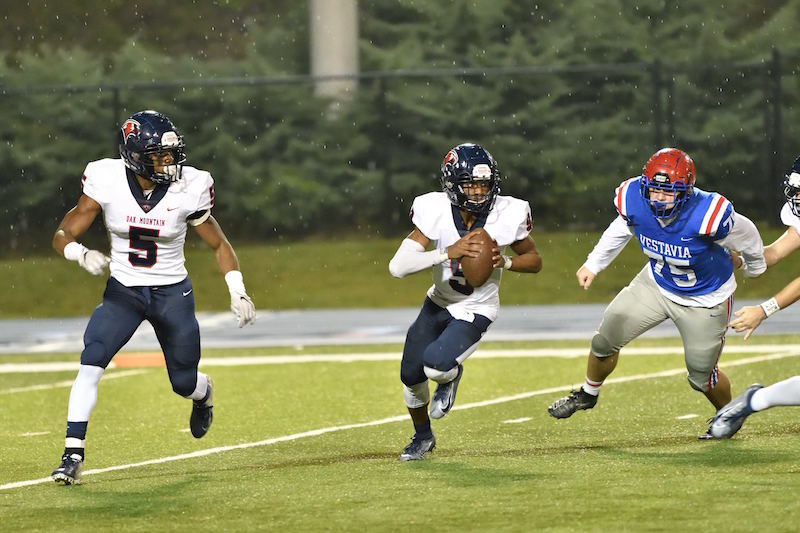 Oak Mountain fell on the road to Vestavia Hills in its final region game of the season. (For the Reporter/Barry Clemmons)

VESTAVIA HILLS – Vestavia Hills clinched a playoff berth at the expense of the visiting Oak Mountain Eagles on Friday, Oct. 25, by a score of 31-10.

The win gives the Rebels (6-3 overall, 4-3 region) the fourth seed out of Class 7A, Region 3, while Oak Mountain’s season will conclude with the end of the regular season on Nov. 1 with a visit from Pace (Florida).

VHHS struck for 10 first-quarter points on Oct. 25 and never looked back.

Jacob Levant ran it in from three yards out with 5:37 remaining in the first quarter, and then Matthew McMeans made it 10-0 with a 37-yard field goal with 1:39 on the clock in the first.

Evan Smith cut it to 10-7 with a 17-yard touchdown run followed by Hogan Morton’s point-after, but then the Rebels closed the first half strong with a 22-yard pass from James Sawyer to Charles Hughes and a six-yard run by Levant to make it 24-7 at the break.

Morton was good on a 33-yard field goal with 7:22 left to play in the game, but Vestavia’s Robert Hanna concluded the scoring with an 11-yard touchdown run with about a minute and a half left to play.

Will Pfaffman paced the Eagles defense with eight tackles, while Juston Taylor chipped in 6.5 tackles and Chase Schwender had six.