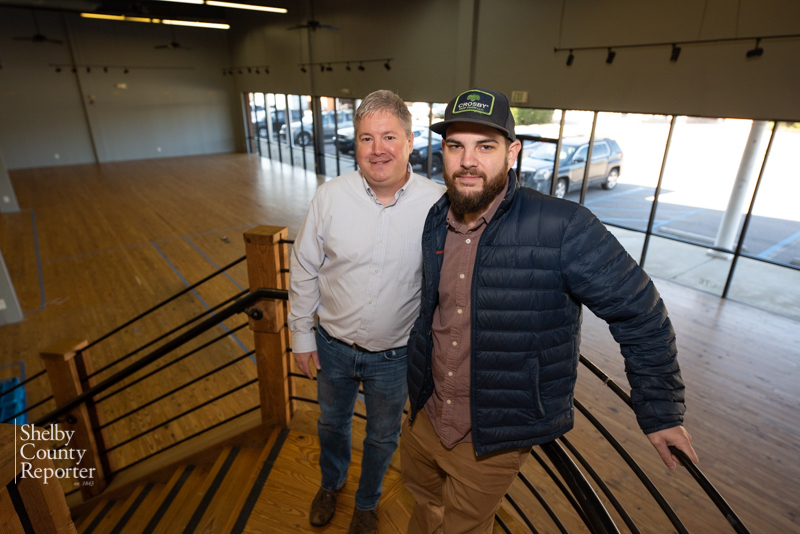 Peter Genereux, left, and Clay Baldwin have teamed up to open Oak Mountain Brewing Company at 110 Cahaba Valley Road in Pelham. The brewery is set to open in March 2020. (Reporter Photo/Keith McCoy)

PELHAM – A new brewery featuring more than 7,000-square-feet of space will be opening in the coming months near the intersection of Alabama 119 and U.S. 31 in Pelham.

Peter Genereux and Clay Baldwin have teamed up to open Oak Mountain Brewing Company, LLC. at 110 Cahaba Valley Road where they feel like the brewery will serve a crucial customer base in Shelby County.

“I felt like the Birmingham market was kind of saturated with breweries down there and it seemed like this side was underserved,” Genereux said. “Some of the investors were saying ‘hey, let’s find a place instead of building a new one’ so we looked for smaller spots around here and we found this place. We liked it for the big open space and there wasn’t a ton of renovations that needed to be done. It’s got high ceilings which is nice with the tanks we’re going to put in, so we started moving forward with the space.”

Genereux has worked for the statewide beer and wine distributor Alabama Crown, while Baldwin was the former head brewer at Ghost Train Brewing.

“I had a business plan and Clay has kind of come in here and been able to put his stamp on things too,” Genereux added.

The brewery itself is located in a space that was formerly a mattress retail store and outdoor store which naturally lends itself to have wide open space.

In addition to the open space on the main level, Oak Mountain Brewing will feature an upstairs mezzanine area to serve as an event space and overflow area that’s roughly 1,000-square-feet and an outdoor patio area.

As far as the beer goes, Oak Mountain Brewing will start with six beers after the initial opening and work up to as many as 18-24 beers on tap. One of the featured beers will be the “Pelham Pilsner” which is described as German style pilsner.

“One thing we’re definitely going to do is the pilsner but we’re going to do a wide-range and do classic styles really well as well as experimental fun beers such as small batch offerings,” Baldwin said. “We just want to make it a diverse portfolio of beers that appeals to a lot of people. We want to do everything with a stress on quality.”

The brewery plans to have a number of different food trucks about five times a week and live music 4-5 nights a week.

Oak Mountain Brewing will be open seven days a week with the hours of operation slated for Monday-Wednesday from 4-11 p.m., Thursday from 2-11 p.m., Friday-Saturday from noon-midnight and Sunday from noon-9 p.m.

Genereux said he’s excited about the location and the customers the brewery will bring.

“The response we’ve gotten so far has been really great and where we are, you can see the back of the building from I-65 and we’re easy to get to from Hoover, Riverchase, Pelham, Helena, Alabaster, Chelsea and 280 so we’re centrally located,” Genereux said. “We’re at a major intersection so the fact that it’s easy to get to, it appeals to people who work in the area or people that live here. So, I’m excited about the location.”

In the coming weeks, the brewery will be looking to hire a general manager, an assistant taproom manager and roughly three people to work on the brewing side of the business.

The buildout for the brewery is expected to be complete around February 2020, while the taproom is set to open in mid-to-late March 2020.

Oak Mountain Brewing is already reserving its event space for things such as corporate events, fundraisers, rehearsal dinners and more.

For more information on booking the event space, contact Debbie Navez at Deb@dreamgateevents.com.