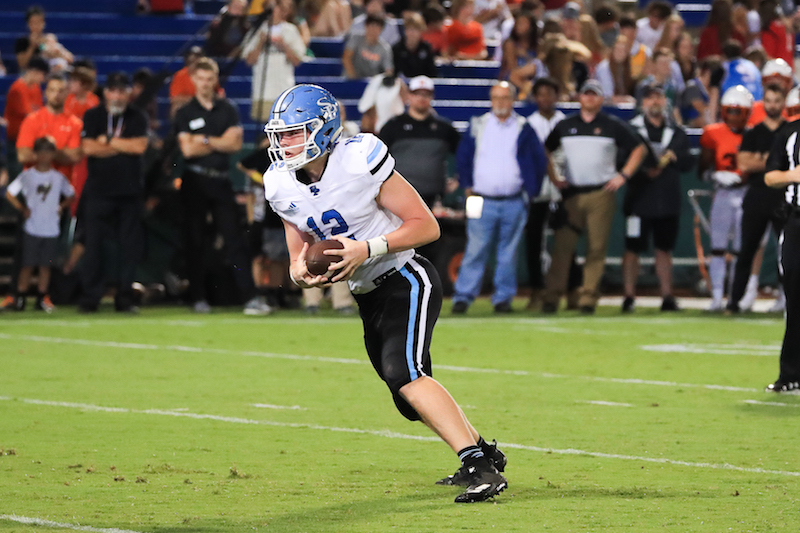 TUSCALOOSA – Tuscaloosa County scored 28 unanswered points in the first and second quarters and hung on for a 42-21 win over visiting Spain Park on Thursday, Oct. 24.

Spain Park opened the scoring with an eight-yard run by Harrison Barker about two minutes into the game.

Drake Tabor’s point-after made it 7-0, but Tuscaloosa County answered about five minutes later with a four-yard run by Damien Taylor.

SPHS (3-6 overall, 2-5 in Class 7A, Region 3) still led because of a missed extra point, but with 1:55 on the clock in the first quarter, Connor White’s 55-yard touchdown pass to Bobby Harless gave the Wildcats the lead for good.

Taylor added two more touchdown runs in the second quarter, and after the second, Haseem Brown ran in a two-point conversion to make the score 28-7 at halftime.

Barker scored on a three-yard touchdown run with 32 seconds remaining in the third quarter to cut the deficit to 28-14, but that’s as close as the Jaguars would get, Taylor recorded his fourth rushing touchdown of the night, this one from 48 yards, just seven seconds later.

Spain Park’s Michael Callens had a five-yard touchdown run with 10:42 left in the game, and Taylor scored his fifth rushing touchdown with 8:43 remaining.

The win was Tuscaloosa County’s first of the season.

The teams combined for almost 1,000 yards of total offense and 53 first downs.

The star of the game was Taylor, who had 375 rushing yards on 27 carries.

Richard Moses and Jake Horton each had 2.5 tackles for SPHS.