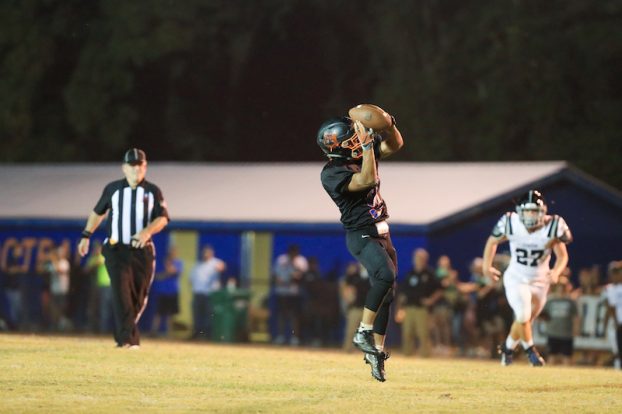 The Montevallo Bulldogs lost a heartbreaker to Lincoln on Friday, Nov. 1, after the Bears scored in the final seconds to complete the win. (File)

LINCOLN – The edges of seats were surely worn at Lincoln High School Friday night, Nov. 1 as the Lincoln Golden Bears eked out a 38-34 victory over the Montevallo Bulldogs in a back-and-forth matchup that came down to the final seconds.

Montevallo was leading 34-31 with about 3 minutes left in the game when a big Lincoln kickoff return put the Bulldog defense in a tight spot. This set up a 5-yard touchdown run by quarterback Javion Surles to put the Bears on top.

Following a mishandled kickoff, the Bears kneeled out the final few seconds of the 2019 regular season.

“I’m extremely proud of our team,” said Montevallo Head Coach Brandon Wilcox. “We fought hard tonight. We came up a few points short, but I thought we played our most complete game at times. We’re going to use this to propel us toward the playoffs.”

The game began with the teams trading turnovers, and Lincoln put up the first points with a field goal.

A first and goal proved fruitless for the Bears in the second quarter, and Montevallo took over on downs at the 2-yard line. Then, Malik Inabinette blasted a 98-yard touchdown pass to J.J. Evans. Deon Gilliland capped it off with a 2-point conversion.

On the ensuing drive, Lincoln scored on a 30-yard touchdown pass and kicked an extra point with 1:25 remaining in the half. But the Bulldogs took it right back as Gilliland returned the kickoff 80 yards for a touchdown. A 2-point conversion pass to Jamarius Carter was good, making the score 16-10 Montevallo.

Things got even wilder when the Bulldogs recovered an onside kick, setting up a great drive topped by a 3-yard touchdown pass to Carter. The conversion failed but the Bulldogs were up 22-10 at halftime.

Lincoln was raring to go as Cam Reynolds opened the third quarter with a 57-yard touchdown run. A holding penalty and a fumble later, Montevallo got the ball at the Bear 20 and drove the ball down to the 1-yard line; however, a would-be touchdown was called back due to a penalty, forcing a turnover on downs.

But Justin Tyus intercepted for the Bulldogs, paving the way for a 24-yard Gilliland touchdown. The conversion attempt was no good and Montevallo led 28-17 with 23 seconds left in the third quarter.

Following a failed onside kick attempt, Lincoln took over at the Montevallo 33-yard line. Then it was Javion Surles hitting pay dirt on a 12-yard play with 10 minutes left to play. Another failed conversion resulted in a 28-23 score.

On the next drive, Quintin Cotton intercepted for Lincoln and set up a Surles 43-yard touchdown run and an extra point, putting the Bears ahead 30-28. But Montevallo’s Gilliland would answer with 4:09 on the clock, reclaiming the Bulldogs’ lead 34-30. Again, the PAT was no good.

The score was adjusted to 34-31 following an apparent reversed call which ruled that the Bears converted a 2-point PAT that was initially ruled no good. The only other score would be Surles’ 5-yarder, which came with just 13 seconds remaining.

Inabinette completed 17 of 29 passes for a total 259 yards, including two touchdowns and a 2-point conversion. Gilliland rushed for 80 yards on 15 carries. Evans had four receptions for 125 yards, and Carter made seven receptions for 68 yards.

Defensively, Rankin Allen led the team with 9 tackles, while Tyus and Jamari Harris made interceptions. The Bulldogs forced 5 turnovers and Orlandis Weeks, Jayvion Seay and Carter each recovered fumbles.

Despite their loss, Montevallo will move to the first round of the playoffs where they’ll host Talladega on Friday, Nov. 8.