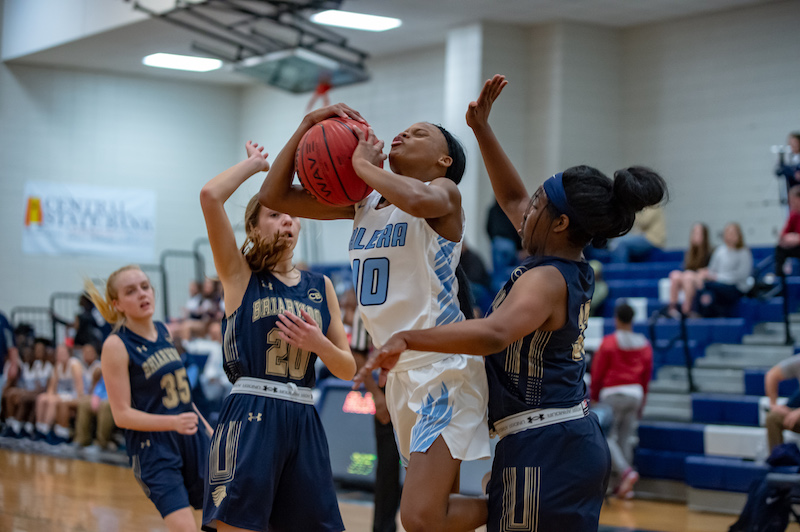 Calera will look for redemption this season after coming up a win short of the postseason last year despite success on several occasions. (File)

If there is one team that has a huge chip on its shoulder going into this season, it’s the Calera girls’ basketball team.

This year, five returning seniors and several other playmakers are back to ensure that doesn’t happen again.

“We’re excited about five seniors being back this year,” head coach James Knowles said. “It’s the first time we’ve had older kids that have been here for four years, and we’re hoping that will help us improve.”

Those two will have the task of replacing Treasure’s older sister A.B. Davis, who posted 12 points, six rebounds and two assists per game last year.

“A.B. was the person that everybody looked to. Myself, the team, everybody,” Knowles said. “She set the tone for how we played. As she played, that’s how we did.”

But with a strong cast of returning players in addition to Treasure Davis and Purifoy, Knowles thinks the balance on this year’s team is better and can make them a more successful team.

“This year we should be a bit more balanced trying to do different things with post players and guards,” he said. “Hopefully everybody can buy into their role whether they’re an offensive or defensive specialist.”

Two of those key post players will be High-Howard, who is returning from an injury, and sophomore Redrea Smith.

Smith played a lot as a freshman, and is one of the four sophomores that will return with experience. She stands at a little over 6 feet and will be joined by Shyia Gilmore, who is near 6-feet tall, as well as smaller guards Kaylen Moultrie and Nakeia Reasor.

But in the post, herself, Gilmore and High-Howard will all be important.

“We’re versatile in the post and can play a big role this year,” Smith said. “Talking more to each other will be key and I want to be able to read what the other post players are doing. We need to be structured and each needs to know what to do on every play.”

With arguably the most height of any team in the county, Knowles knows that’s going to be something that can make a difference each night.

“We can become big quick,” he said. “Especially now that the sophomores have experience, they know what to do and I’m not afraid to put them in the game together at any point in time.”

Despite being just a sophomore, that experience is something that has given Smith a ton of confidence heading into this season.

“Being my second year, I have a feel for what I need to do and see how serious it needs to be taken,” she said. “I know we can get better and do what we need to get where we want to be at the end of the year.”

Knowles is hoping that experience, as well as the blend of old and yung, will help this team take the next step this season.

“Hopefully, with the experience and leadership of the senior class and the experience of that sophomore class, we can make it to regionals and use last year to motivate us,” he said.

Knowles went on to say the biggest key for this year’s team will be consistency. Last year, he said they played like a veteran team at times and like players that had never stepped on the court at other times.

“If we can play through adversity and not be so up and down emotionally, we’ll be in better shape this season,” Knowles said. “We need to bring our A game every day because somebody can beat you on any given night, especially in our region.”

Calera will open the 2019-20 season with a road matchup against G.W. Carver in Birmingham on Thursday, Nov. 7.