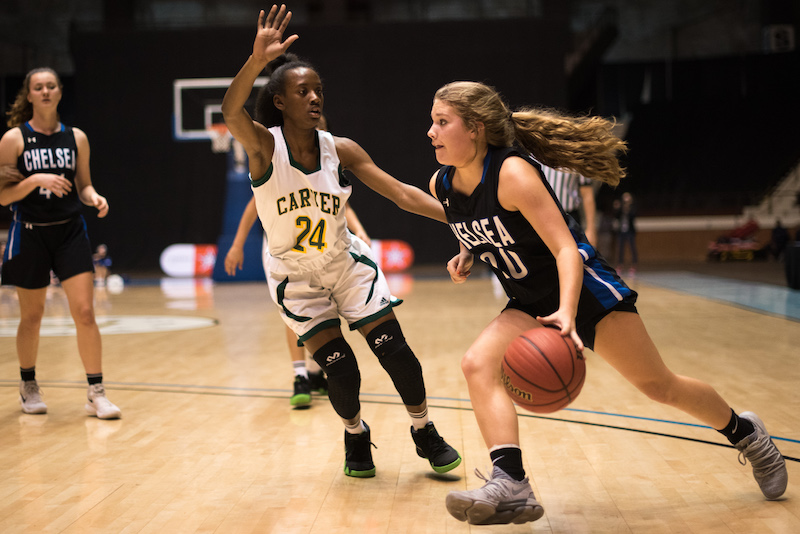 One of the most experienced teams heading into the 2019-20 basketball season will be the Chelsea girls after earning a spot in the Sweet 16 for the first time since 2001 last year. (File)

It may be crazy, but a year after advancing to the Sweet 16 for the first time since 2001, the Chelsea Hornets’ girls basketball team should be even better heading into the 2019-20 season.

Last year’s remarkable season featured a first-year head coach in Jason Harlow, who took over for a 3-22 team. In one year, he led the Hornets to the postseason and finished three games above .500.

This year, not only will Harlow be back and more accustom to his team, but Chelsea will welcome back its entire starting lineup, including two All-County players.

“We’re just a few practices in and you can tell a difference,” Harlow said. “With a year under their belts, we have an excited group with great leadership that knows what it’s going to take to be successful.”

It’s a team that returns five seniors and six starters, all of whom have experienced success.

“Last year was a lot of fun, especially in year one as a head coach,” Harlow said. “We exceeded expectations. As a coach, you want to play your best basketball after Christmas. We ended up doing that and won area for first time in over a decade and advanced to regionals for first time in close to 20 years.”

But at first, the team didn’t really know what to expect heading into Harlow’s first season.

“When we first saw him, we were nervous,” said returning leader Jordan Parker. “We questioned whether he knew anything, but that first practice with him we immediately knew. We had never studied plays or film, but he made sure we were prepared each game and it paid off.”

Parker will return as one of the county’s best players this season after averaging 11.8 points, 7.2 rebounds, 2.3 blocks and 1.9 steals per game last year. During area play, she upped her points per game and rebounding averages to 16 and 12.3, respectively.

But she also got hurt late in the season and was forced to miss all of her team’s postseason action.

“I was upset about being hurt late in the season, but somebody stepped up every night,” she said. “I was never worried about it. Seeing that view point was a big help to me. Now going into this year, we’re a better team for it. We have key people back and our chemistry is great.”

One of the players that stepped up in Parker’s absence was another All-County player in guard Pressley Rains.

“We picked our play late last year,” Rains said. “When Jordan went down, we knew we had to do it for her.”

She was a big reason the Hornets were able to win the area tournament thanks to a 23-point performance in the championship game against Pelham. Rains ended the season averaging 11.9 points, 6.6 rebounds and 3.3 steals per game.

“Sports is about character building,” Harlow said. “Jordan was averaging 16 points and 13 rebounds in area play. Our team picked her up and I couldn’t be more proud from the effort in that situation when she went down. So many stepped up on a nightly basis for us.”

Some of the other big playmakers back this year are Mackenzie Titus, Sydney Schwallie and Suzanne Ridgway.

Titus can play in the post and is a big threat defensively blocking shots, Schwallie is one of the best young point guards in the state having played a ton of minutes as a freshman last year and posing the potential for 20-point games, and Ridgway is a major disruptor defensively. Ellen Fleming is another player that can be a standout on any given night as well due to her ability to do anything on the floor.

“We have some experience back,” Harlow said. “That sets expectations in the program pretty high. The goal is to advance to regionals. Being a year older, we hope to know how to handle different situations this season.”

Rains said this team won’t step on the floor this season without trying its best.

“Coach Harlow had high expectations for me last year,” Rains said. “He knew I could do better and pushed me. This year we’ve talked about how much we’ve grown, but how we still have a ton to prove. We can always be better.”

Chelsea’s experienced group will start the new season on Thursday, Nov. 7, with a home game against Minor.