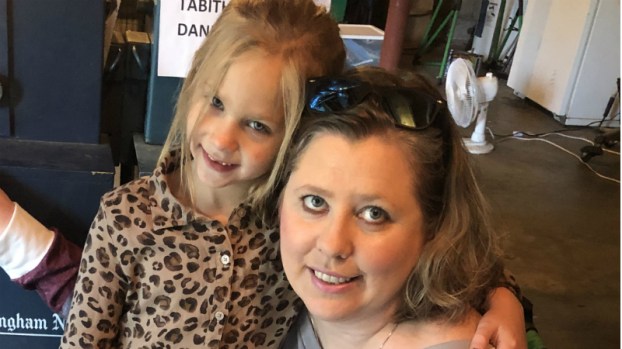 Tabitha Daniel and her daughter, Harper, are working to create a Little Free Library station in their Chelsea neighborhood. (CONTRIBUTED)

CHELSEA – Chelsea resident Tabitha Daniel wants everyone to have access to books and is working to create a Little Free Library in her neighborhood with her 6-year-old daughter, Harper.

“I am a part of several reading groups on Facebook,” Daniel said. “One of the groups features all of these stories about women that have done important things in the world. Since I have a daughter I follow these newsletters and one had a link to a website featuring the Little Free Library. The program initially started with a guy who had a cardboard box in his yard and told others to take a book, read it and bring a book back. The concept blossomed from there, and now you can find these types of libraries all over the United States.”

According to the organization’s website, the nonprofit hopes to inspire a love of reading, build a community and spark creativity by fostering neighborhood book exchanges around the world.

Tabitha and Harper hope to have their library station set up and ready to go by the Christmas holiday.

“Reading and having access to books has always been a subject that has been close to my heart,” Tabitha Daniel said. “I grew up in an area that was under the poverty line, and books were a way for me to escape the things I was facing in my life. My own kids have so many books, and I want my kids to realize that not everyone has access to a book.”

The last few years Daniel has also participated in several book drives including one where the operating room staff at Children’s Hospital collected over 700 books in 2018 for STAIR program of Birmingham.

Daniel said books were also collected in honor of a friend/coworker at Children’s Hospital that had a baby die in 2018.

The remaining books that were collected from the two drives will serve as the initial startup for Daniel’s neighborhood library.

Daniel said she and Harper started researching ways to create a box for the books to be stored.

“You can purchase a kit and use one of the boxes the organization suggests, but it ranges between $300 and $600,” Daniel said. “We thought we could think outside of the box a bit so we called around and found some old boxes that were used for newspapers at one time.”

Daniel and Harper will have one box in their Chelsea neighborhood and a second box on the property of King’s Home in Chelsea.

“We are going to decorate the boxes, and once they are up, they will appear on the map of Little Free Libraries,” Daniel said. “We will monitor the boxes and keep an eye on everything, but we are really excited. There will be one shelf for children’s books and one shelf for adult/young adult books. We will also have a journal inside so if people want to sign it or leave a note they can.”

Individuals are encouraged to donate books to the library as well.

For more information about Daniel’s library or an interactive map, visit LittleFreeLibrary.org.