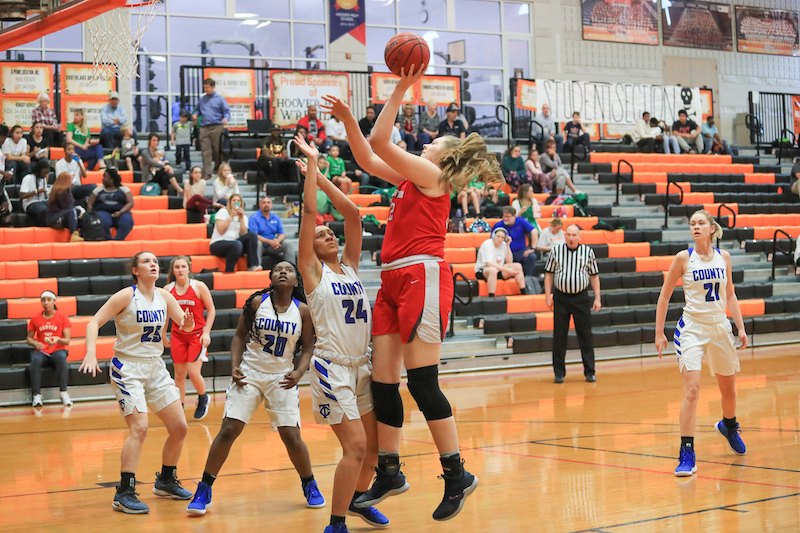 Oak Mountain will return a few senior leaders to its 2019-20 team, including All-State player Hannah Edwards, while the Eagles will be looking for redemption following a first-round loss in the area tournament last year. (File)

It still makes them sick to think about, but it’s memory that is implanted in the minds of the Oak Mountain girls basketball team heading into the 2019-20 season.

That memory? A buzzer-beater 49-46 loss to Tuscaloosa County in the 2018-19 area tournament that ended the Eagles’ season short of a spot in the Sweet 16.

“I was actually at Hoover recently and looked at the spot where that girl made that shot and it immediately made me want to leave,” said senior shooting guard Abi Brown. “We’ve worked hard this offseason to make up for that moment.”

Entering the 2019-20 season, Oak Mountain may lose its leading scorer in Kailey Rory, but they get back one of the best post players in senior Hannah Edwards as well as Brown and fellow senior Ta’Niyah Smith. In addition to that, juniors Riley Sullivan and Julia Tucker will be key players as well.

But with those players back and the chip on their shoulder, there is reason for high expectation this season.

“I’m confident we have it this year, but they have to realize who they are and work hard,” head coach Beth Parmer said. “We have a few seniors, but there will be a lot of question marks on this team and we’ve got to take the pressure off Abi and Hannah.”

With the losses of Rory, Emily Cruce and Clara Fuller, Brown and Edwards will have to play a very important role this season. And both should be poised for big seasons.

Edwards brings back 15.1 points per game, 9.7 rebounds per game and 68 blocks from last year. She was also the second best rebounder in the 7A classification last year.

“We have a lot more heart and that’s our main fuel this year,” Edwards said. “Those moments in just a few days of practice, you can feel that reminder of what happened last year in the back of our heads. None of us want it to happen again and we’re determined to make sure it doesn’t.”

Parmer knows teams are going to focus on shutting down Edwards this season and knows the importance of taking pressure off of her. One way to go about doing that is with a tougher defensive effort.

“Coach P has turned us into defensive team,” Edwards said. “Before Coach P, we didn’t have a certain style, now she’s given us an identity. I think people will have a tough time trying to beat our defense this year.”

“Sometimes what you lack in offense, you can make up for in defense,” Parmer said. “We plan to do that. We’re a very gritty, hard-nosed bunch. We pride ourselves in putting pressure on teams and hope to do that to make up for some points.”

But in addition to that, Parmer has also put an emphasis on this team fixing some of the mistakes they made last year. Eluding to the heartbreaking buzzer beater, she said there are things in late-game situations they could do better coming into this season, and they need to do those throughout the game.

“We’re practicing more pressure-packed situations,” she said. “At times we didn’t look ready for end of game situations so we want to be ready for that this year. We also need to limit turnovers and make clean passes in those situations.

Parmer said her team has the ability and she is pushing them to be their best, but she can’t win the games for them.

“You just have to prepare them as best you can,” she said. “We were off the radar last year, but this year, teams will be more familiar with us and will be coming after us.”

But with Parmer bringing up last year’s heartbreaking end every time the team needs an extra boost, they’re putting in the work and won’t have any lack of motivation going into the season.

The Eagles will start their path to redemption on Tuesday, Nov. 12, with a home game against Mountain Brook.