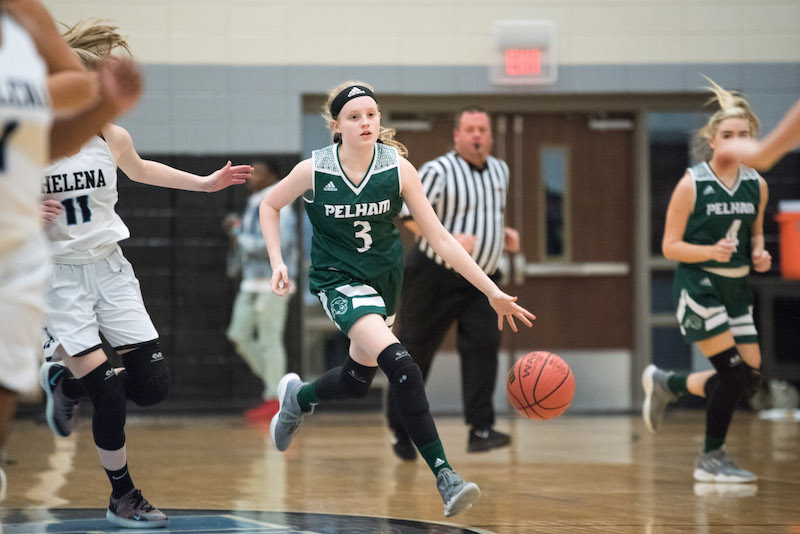 The Pelham girls basketball team had a special season in Crosby Morrison’s first year as head coach last year and will look to continue those winning ways this season. (File)

After winning three games two years ago and eight the year before, the Pelham Panthers welcomed in new coach Crosby Morrison with an 11-win season last year and a trip to the playoffs.

Now, the Panthers head into year two under Morrison with the bulk of their roster back looking to continue building the program into a postseason threat.

“We’re young again like we were last year, but the difference is the freshmen from last year all have experience under their belts and under me,” Morrison said.

The goal for Morrison and the team last year was to change the culture to play with more “grit and heart.” That led to 11 wins, which Morrison thinks is still important.

“Last year wasn’t great on paper, but 11 wins was the most for this program since the 2011 and 2012 season,” she said. “We wanted the seniors to invest because we knew the young players would follow that. Everybody bought into the system and now we all believe in each other.”

Now this year, Pelham feels like it can compete with teams it couldn’t previously.

A big reason for that confidence is the return of two seniors in point guard Tamiya Nelson and shooting guard Lauren Watts.

Nelson is a player that had to sit out last year, but brings a multi-dimensional guard to the team. She has also been looked at as a leader on the team after practicing with her teammates last year and learning from Morrison each game from the bench.

“It was tough not to play last year,” Nelson said. “But I got to learn a lot and did everything I could to be a part of the team. I was known as ‘coach T’ last year. I gained respect and got to practice with them every day. This year, I’m looking forward to big things. We can compete with anybody.”

Watts will play alongside Nelson as the two-guard, and the senior hasn’t just been working on her shot in the offseason, but her conditioning to make sure she can be as intense defensively as possible.

“One of our main focuses this year is going to be to be strong on defense,” Watts said. “I want to be fast so I can keep the pressure up.”

The defense is something Morrison feels like can be a difference maker this season. Last year, the Panthers didn’t press much, but over the summer they worked on man defense and pressing in both the full court and half court.

“We lost some height, but gained some speed,” Morrison said. “Some of our younger kids coming up are athletic and can run. We’re going to play in your face and press a lot this season.”

Another key emphasis for this year’s team will be turnovers. Last year, Pelham was a turnover machine, and that became the main difference in many of their losses with more than 20 turnovers on several occasions.

“With those young kids come turnovers,” Morrison said. “We probably led the county in that category last year. This year, we’ve worked on situations where we have to protect the ball. We need to make sharper passes and know when not to do too much this season.”

And while the Panthers will be young, they’ll also have a ton of experience back on this year’s team.

“We’re confident after the way last season ended,” Morrison said. “But we don’t want it to end there. We want to go even further this year.”

The Panthers will open the season on Friday, Nov. 15, with a road game at Moody.