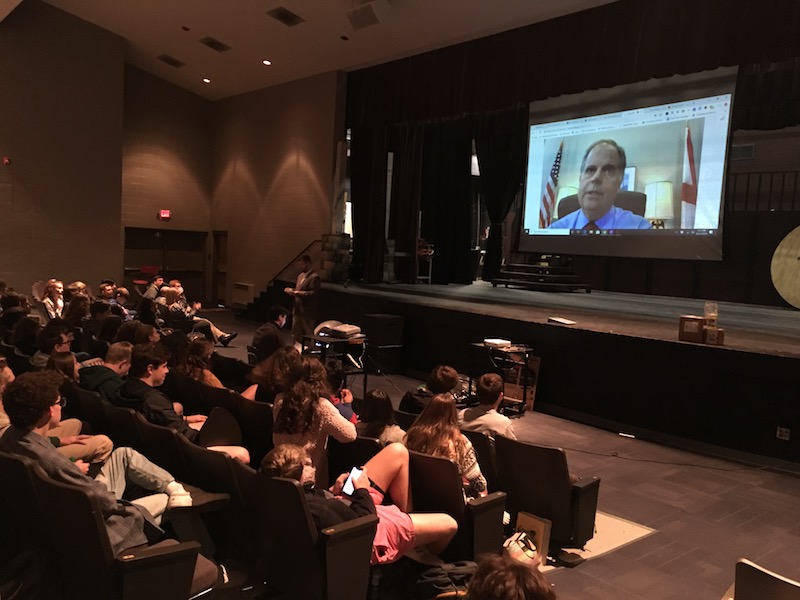 Jones spoke to about 160 10th and 11th graders in AP U.S. history and AP government classes through a video streaming service.

Instructor Ryan Adams said he was one four participants in the United States Institute of Peace Teachers Program and during the closing program met Jones and a representative of his office, who discussed Jones doing outreach to high schools through such arrangements.

“You try to inform them that this is an opportunity that doesn’t happen very often,” Adams said. “When you have this kind of a chance, you want to make sure you take it.”

Several students submitted questions beforehand to Adams and were able to ask them of Jones, who first gave a brief overview of his responsibilities and the climate at the nation’s capital.

“We are struggling with any number of issues we are dealing with on a daily basis,” Jones said.

Student questions included how Jones aligns himself in the Democratic Party.

“I really don’t align with any one person or candidate,” Jones said. “I really try to align myself with the people of Alabama.”

“I think it was a very bad mistake,” Jones said and explained the move could be seen as abandoning allies and opening the door for ISIS to return to the area. “I’m going to tell you, this is going to end up with what they call ethnic cleansing. It’s not just Democrats who are outraged about this. It’s across the aisle.”

A lighthearted question was about Jones’ favorite member of The Beatles, and the answer was Ringo Starr.

“I play around with the drums a little bit. I’m not very good, and he’s not either,” Jones said. “And the other thing is he’s not a very good singer, and I’m not either. So I can relate to Ringo Starr.”

Another topic was political divisiveness, but Jones drew a distinction between divisiveness between political parties and among citizens in general.

“If you look back at history, there has always been political division,” Jones said. “If you go outside of Washington, it’s really toxic out there. We’re going to have to hit a reset button at some point.”