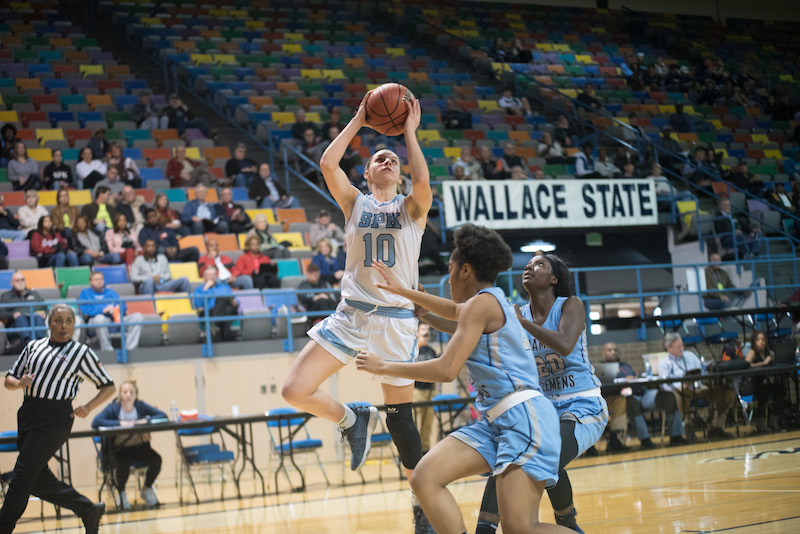 Spain Park’s 2018-19 season ended in the Elite Eight and one round short of its third straight trip to the Final Four, but this year’s team is determined for redemption. (File)

Last year’s season came to a screeching halt when the Spain Park girls’ basketball team lost to Hewitt-Trussville—a team they had gone 4-0 against in the regular season—in the area tournament.

That prevented the Jags from making an appearance in their third consecutive Final Four and from having a chance to defend their state championship from the season before.

“From a coaching perspective, you can count on one hand signature wins and toughest losses,” said Spain Park head coach Mike Chase, who has been coaching for 24 years. “I’ve coached a lot of games and the way last season ended with a loss to them one time out of the five times we played them; that’s one of the five worst losses I’ve ever had.”

But their leadership helped set the stage for sophomore Camille Chase and junior Avery Masdon, who will be looked upon to fill those big shoes.

“I’ve learned a lot about consistency,” Masdon said. “I’ve always looked up to them, and I hope to be Bailey, PG and Claire (Holt) all in one this year.”

“Learning from what Bailey and Ahrielle Parks did at guard last year was helpful,” Camille Chase said. “Their leadership and now an extra year of experience has my confidence level up.”

Both of those players will play big roles in the starting lineup and will be vital if the Jags want to be successful this season, but they’ll also have the return of one of the state’s best players.

All-state player and finalist for player of the year in the state, Sarah Ashlee Barker will return to Spain Park’s starting five this season having played at the varsity level since her freshman season.

Last year, she averaged 20.2 points, 9.5 rebounds, 2.5 assists, 2.3 steals and 1.1 blocks per game, finishing as the leading scorer in all of Class 7A and the third best rebounder in the classification.

Now, she’s a senior, and she knows it’s about more than what she does from a statistic standpoint this year.

“We’re a very young team,” Barker said. “I’m setting the bar every practice. If I come in sluggish, the practice is going to be sluggish. I can’t bring a bad day into practice. If I’m having a bad day, I have to flush it and be ready to lead this team on the court.”

That will be key for a team that has seven players that are sophomores or younger, including three freshmen and one eighth grader.

Barker has also been on three consecutive teams that have been to the Elite Eight, including two consecutive state championship appearances and a state title. With that experience, she’s able to relay messages.

One of those messages that she’s relaying to the team is how the Jaguars bounced back to win the state championship two years ago after losing in heartbreaking fashion a year earlier to Hoover in the title game.

“After my freshman year, we were hungry to get back and we did it that next year,” Barker said. “There is some similarity this year because we want redemption. Everybody is pushing themselves and a lot more. We need to hold each other accountable every day.”

Last season’s heartbreak was slightly different because Spain Park ended up going into the matchup as the confident team having beaten Hewitt four times in the regular season, but the Huskies came out and dominated from start to finish picking up a 72-56 victory.

“It was not acceptable,” Barker said. “We went into that game and were a little cocky having beat them four times. They deserved that win and played harder than us. We came out sluggish.

“Being the leader of this team, I need to look at how I went into that game and think about that going into every game this year. It’s definitely a motivation because we don’t want to be sitting in that locker room like we did last year with everybody in tears.”

He’s been coaching all of them since middle school so they know what to expect this season, which has the team completely bought in.

“We have complete team buy in. That’s our biggest strength right now. There is total belief from players in coaches, coaches in players and players in players,” Chase said.

Spain Park won’t be the tallest team, but it wasn’t last year either. The identity of the team will be good defense and shooting the three-ball accurately.

The Jags return other speedy and athletic playmakers like Mackenzie Culpepper and Caroline Keith, who can both shoot as well. If one or two can step up as accurate shooters to give someone for Barker to kick the ball to, this year’s team will be just as dangerous if not more dangerous than recent years.

Spain Park will open the season on Thursday, Nov. 7, with a matchup against Class 4A Anniston, who made it to the 4A championship game last year.