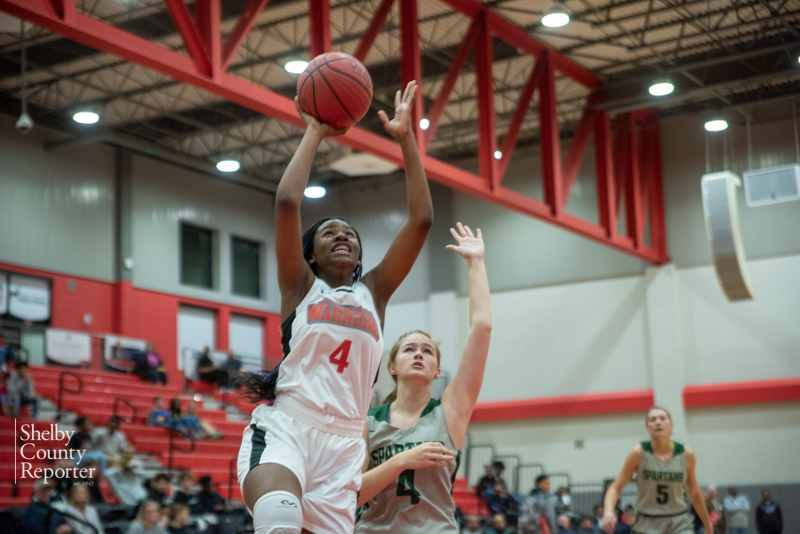 The Thompson Warriors will have a new head coach when the 2019-20 basketball season kicks off, but he’s one with plenty of experience. (File)

A new era will begin for the Thompson girls’ basketball team during the upcoming 2019-20 season after the Warriors hired Marty Smith to lead the team in the offseason.

After finishing below .500 the last two seasons, the Warriors haven’t had much confidence to build on, but with the addition of Smith and the return of several athletic and speedy playmakers, there seems to be hope heading into the 2019 season.

“We have to get 1 percent better every day,” Smith said. “I know that’s coach talk, but it’s no secret the struggles we’ve had the last couple of years here. The girls know about it and want to fix it.”

He has also put together a staff that features several state champions, as well as former Alabama and WNBA player Monique Bivins, who actually graduated from Thompson.

But despite that track record of his coaching and his well-known assistants, Smith knows it means nothing and that forming trust with his new players and staff is going to be key.

“The biggest thing with any new staff is trust,” he said. “I know these girls loved their previous coach and now they have someone new here. I’m not scared to show the players my heart and I want them to know me. We obviously have work to do, but I want that relationship to form with them as well.”

And it’s a talented group of players he’s trying to earn the trust of, including three seniors, four juniors, four sophomores and two freshmen.

One of those returning leaders will be senior guard London Wooley, who averaged eight points, three rebounds and 1.8 steals per game last year for the Warriors.

In addition to that skillset, she’s also one of the fastest athletes in the state and a major recruit in track. She’ll also be joined by Alayah King and Malaysia Samuel in running indoor track during the season.

“The only way you can get better in any sport is competition,” Smith said. “These girls going out and competing in track helps them get that competitive edge. They’ll miss some games this year, but I want them to take the opportunity to get better in that sport as well. I think they benefit one another and they’ll put the work in to be great on the basketball court as well.”

Those speedy athletes will be key to the season, but so will several others, including senior Taylor Thrash and junior Lindsey Cook—both guards.

As one of the three seniors, Thrash will be looked at as a leader when things are going good or bad this season.

“We have to make sure the younger players know what’s going on,” Thrash said. “We’re learning a new offense, so it’s hard, especially for the freshmen. I’m trying to help them understand as well as others.

We know we do things wrong, we have to recognize it and fix it this season. I want to be a shoulder to lean on because everybody is going through the same thing and I want to help us get through it.”

That’s something Cook is also focusing on as a junior.

“We had talent and good relationships last year, but weren’t on the same page,” she said. “This year, we have expectation to buy in with one goal of being a team and being on the same page.”

And while those two will be on the court a good bit this season, Smith said he’s going to play 10-12 players every night because that’s the best way to get them developed.

“If they’re playing hard, they’re not coming out of the game for very long, because that causes somebody else to have to step up and play just as hard, which will be tough to match,” Smith said. “But that’s what I want to see. I want us trying to match or exceed who is playing the hardest on the floor.”

That sense of balance that anybody can be the person on any given night is helping the players trust one another a little bit more this season.

“We have to know who to look to on a given night,” Cook said. “Who has the hot hand. It’s not just one player this year, we have a ton of players that can play and we have to trust in them.”

A total of 10 players will return that experienced varsity play last year, and while the Warriors finished the season 9-19, they know what to expect going into the season.

The Warriors also had the majority of their struggles in the second half of the season, winning just one area game, so Smith wants to make sure the team starts playing its best basketball in January.

“These girls have an opportunity to do a lot of special things this year,” Smith said. “It won’t be pretty early, but I wouldn’t want to play us in January. The area tournament is what it all builds up to. We have to be mentally tough by that point and that’s where we are trying to build up to throughout the season.”

Smith said the team is already showing him signs through the first two weeks of practice.

“I can tell we’re doing things the right way because in-between drills they’re coaching each other up and echoing what I’m saying,” he said. “That’s what special. They’re not scared to ask each other questions and the communication is fun to see from them.”

Smith said he is known for running a fast, up-tempo style of play and that’s what Thompson will do this year. He said if they players are playing at full speed he’ll be OK with mistakes every now and then, but they have to have that level of intensity.

Thompson will open the 2019-20 season on Thursday, Nov. 7, with a road test against Woodlawn.