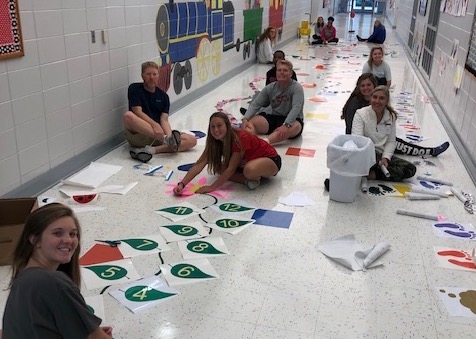 ALABASTER – With the addition of sensory paths at four Alabaster schools, students now have access to an alternative method of relieving stress and possibly reducing behavioral problems.

After hearing about a school is Georgia utilizing sensory paths, Jamia Alexander-Williams, founder of the Angel Warrior Foundation, immediately thought Alabaster City Schools students could benefit from them.

A sensory path is a colorful, creative and playful way for kids to build sensory pathways, which are connections in the brain that are responsible for sight, smell, taste, touch and sound. Sensory paths also help improve motor skills like balance and spatial awareness. Sensory paths help to decrease stress and fidgeting while still engaging the senses and improving focus.

“The sensory path designs include things like ladybugs, frogs and the alphabets in a circle,” Williams said. “The students can interact with these things however they feel. They can jump, hop, touch and do whatever else they feel they want to do.”

Williams reached out to Dr. Keri Johnson, ACS coordinator of secondary curriculum and instruction, to see if the school system would be interested in moving forward with placing sensory paths in Alabaster schools. With Johnson on board, Williams reached out to Project Outreach and THS media center specialists to help cut out the shapes that were used to construct the sensory paths.