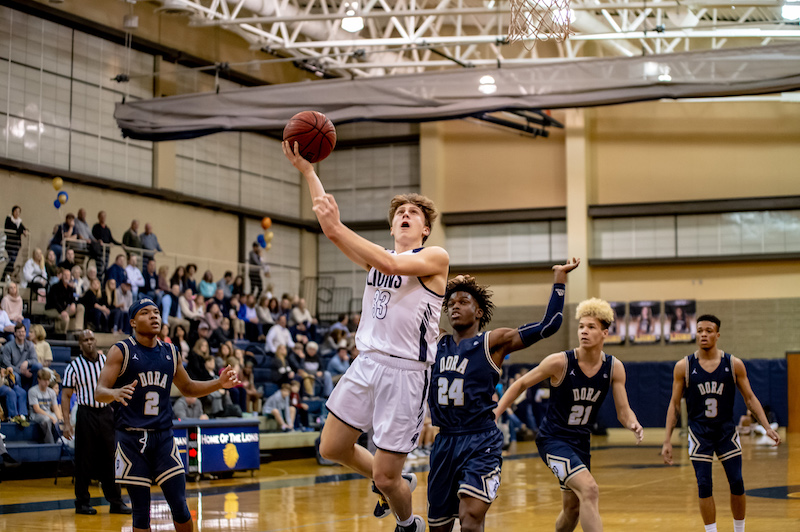 The Briarwood Lions will return three starters to its 2019-20 basketball team, and one of the county’s best players in Hayden Lamey. (File)

Briarwood’s basketball team has been on the verge the last couple of years, but heading into the 2019-20 season, the Lions look like a team poised to make some noise.

With the return of three starters, including All-County players Hayden Lamey and Chance Beard, the Lions are excited about the possibilities ahead.

“It’s a lot of fun to be back in the gym,” Lamey said. “We look forward to this all offseason and this year, we have a special team that could make a run to state. Some of us have been playing together since fifth grade and now we’re going to know each other’s everything. It’s great.”

Lamey isn’t just one of the leaders on Briarwood’s team but is one of the best returning players in the county this season after averaging 18.2 points, five rebounds, two assists and 1.2 steals per game last year. He was also automatic from the free throw line, making 92 of his 115 shots from the line.

His return as a forward that can handle the ball while also getting to the rim is big, but so to is the return of Chance Beard, who has the potential to be a double-double machine this season.

Last year, Beard averaged 7.3 points, 7.1 rebounds and 2.6 blocks per game in the post, and seemed to be on the verge of a special season. This year, he brings back that experience and has good size with a height close to 6-foot-6.

“We haven’t had this depth or this size in a very long time,” Beard said. “It gives us guys that can compete for rebounds on both ends of the floor.”

In addition to those two, Blake Lester will return as a point guard that also get a ton of experience last year. With Lamey and Beard to help take pressure off, Lester won’t just be a facilitator this season, but he’s been working on his shot as well to make sure he can add another scorer to the floor.

“My biggest weakness going into offseason was shooting deep ball,” he said. “I was in a boot all summer and worked on my form and shooting the ball. Hopefully that pays off.”

Regardless, Lester knows Lamey and Beard are guys that can carry the team, which gives him another main focus.

“I’m in a position where I just don’t need to turn the ball over,” he said. “These guys are lights out scorers, which makes it easy on me if I can take care of the ball and get it to them.”

Those three players will also be returned by a few other key players, some of who also play on the football team, including Chase Travis, Cal Reebals and Brooks Donnelly, while Sam Russell will be a key as well.

“We all support each other,” Lester said. “We can’t wait to get those guys back from football. They came in after practice and watched first basketball practice this season because we’re all excited about the opportunity we have this year.”

One aspect Briarwood is hoping to improve on this year is closing out tight games.

Last year, the Lions finished 13-14 overall, but they lost in the area tournament championship by five points to Woodlawn and lost nine games by 11 points or less.

“No one really wants to lose, and we had some very frustrating games last year that we could have won,” Beard said. “Closing those out has been a focus for us going into this year.”

Briarwood will start its 2019 season on Tuesday, Nov. 19, with a home game against Presbyterian.