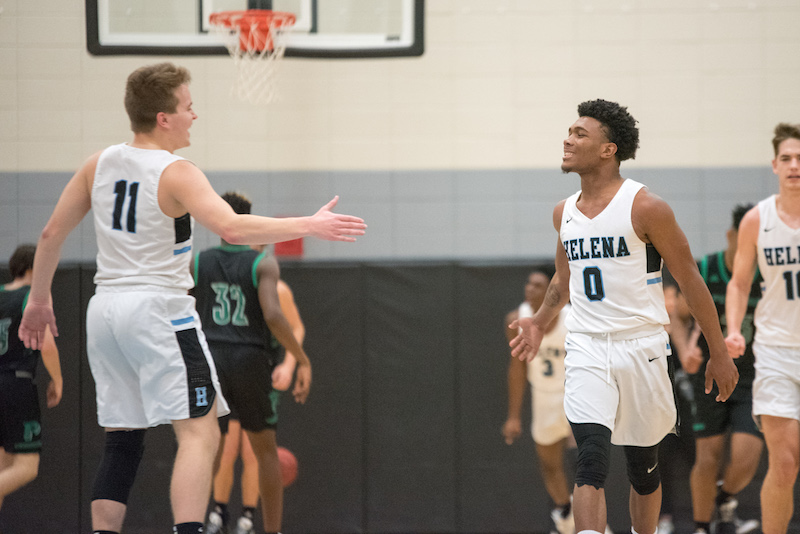 The Helena Huskies return their two leading scorers from last year and have a good cast around them heading into the 2019-20 season. (File)

The Helena Huskies have been to the Sweet 16 two years in a row after never having been there before, and now the program expects to win. That’s an attitude the Huskies are taking into this season with the return of their leading scorer and the addition of several sharp shooters.

It also marks the second year under head coach Bill Grant, who led the Huskies to another 20-win season last year at 20-11 and now has a group excited to play for him.

“We have seven seniors that graduated last year, but have eight seniors back this year,” Grant said. “We won’t be the most experienced, but we have a lot of guys back that didn’t want to play for a new coach last year. Now they want to come back and I like what we have because they’re all hard workers.”

The two players that are back and do have experience are the top two leading scorers on the team and All-County players in point guard Daunte Cave and and shooting guard Caden Pierce.

“They’ve played together for six years,” Grant said. “It’s so important to have a guard like Daunte. Teams were geared to stop his penetration. They would clog the lane to keep him from driving, but we only had one or two guys that he could pass to. They invited us to take that 3-point shot. If he can remain unselfish that will be key, but things will open more for him with so many more shooters on the floor this year led by Caden.”

Those two will be the key to this year’s team, and it’s something each is taking to heart.

“We need to communicate a lot more,” Pierce said. “We have to do a good job of teaching everyone. Daunte and I are the only ones that know the plays and have varsity experience. If we can keep bringing guys along, we’ll be in good shape.”

And while they’ll be key, this year’s team will have a little bit more help due to several guys that can shoot the ball.

“I’ve been doing this for 37 years and this might be the most talented shooting team I’ve ever had,” Grant said. “That will help us spread the ball around, especially with the unselfish team we have.”

Grant said last year’s team was so limited in who could score, so this year he’s excited about the possibility of multiple players being able to put up big points.

Two issues, however, will be lack of experience and lack of height.

The Huskies graduated their only starting big man in Nate Andrews, who averaged a double-double last year with 10 points and 12 rebounds per game, while he also added four assists per game.

With that lack of size, Grant said physicality will be the key.

“We won’t have much size, so it’s going to be extremely important for our guys to be physical from the guard position to make their presence known,” he said.

Grant said one way to help is for his team to continue playing defense like he likes.

“I want to keep the score in the 40s and 50s,” Grant said. “I will always put an emphasis on that side of the ball because you may not be making shots, but the defense can always keep a game close.”

Helena is planning to run a matchup type zone that Grant has run for the last 10 years.

“It’s a good defense to use when you don’t have a lot of size,” Grant said.

Cave said one of his main focuses is helping some of the new players understand the defensive scheme and making sure they are aware of when to help and where to be at any given moment.

Grant said his guys will put up a lot of shots, but the defense will be what wins or loses games this season.