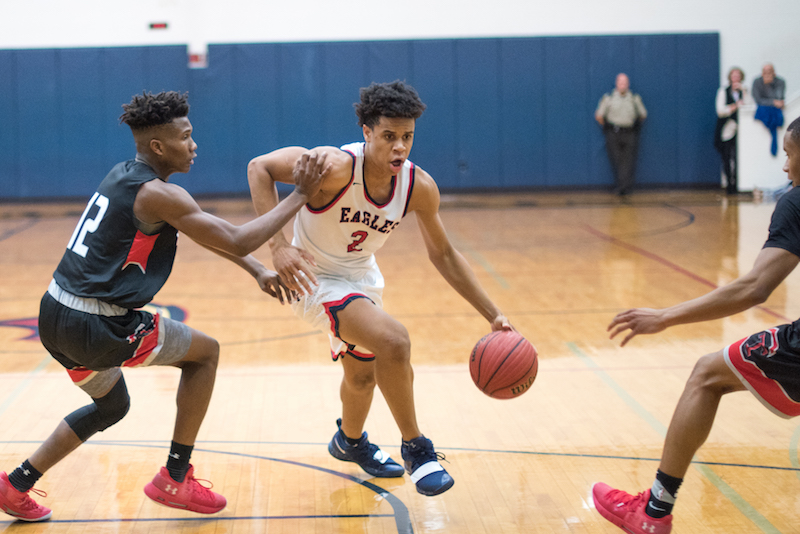 The Oak Mountain Eagles will return several starters to their 2019-20 basketball team. (File)

Oak Mountain finished the 2018-19 basketball season with a record of 19-8 and all eight losses coming by 13 points or less, but none of that mattered in the end, and none of it matters going into a new season.

What the Eagles remember from last year is one loss by seven points to Thompson in the first round of the area tournament. After beating the Warriors twice in the regular season, Oak Mountain fell short of a third win in the area tournament, which ended the Eagles’ season short of the postseason.

“We have a chip on our shoulders and don’t want to experience that again,” head coach Chris Love said. “We were young and an immature group last year. Now, we understand it’s about focusing on us as a team and getting better every day. Everything else will take care of itself.”

And the experience he referenced is there.

Oak Mountain will return its second leading scorer in guard Zane Nelson, as well as other starters in Evan Smith, Will Shaver and Noah Young.

“Zane has become a more consistent shooter and leader, as well as a ball handler. He’s loud and borders on obnoxious, but I love that about him,” Love said with a laugh. “He’ll tell you he’s going to win and helps hold this team accountable.”

Nelson spent the offseason working hard on his basketball game after giving up football.

“After the Thompson game last year, I talked with my family about focusing on basketball more,” he said. “Through the summer, I worked hard on basketball and it’s helped me a ton to improve my skillset and get faster and bigger.”

In addition to those two guards, Shaver and Young will add a bit of size.

Young stands around 6-foot-5 as a forward that can stretch the floor, while Shaver is closer to 6-foot-9 as a sophomore.

Shaver, who had trouble with ball-handling and conditioning at times, has gotten into the best shape he’s ever been in and has worked hard at ball-handling in the offseason. He’s primed to have a breakout year in the post with his size, but he’ll likely miss the first month of the season with a broken wrist.

“Will is in the best condition he’s ever been in,” Love said. “His footwork has improved. He’s disappointed right now, but I think in the end we all know we’ll be a better team because of it and he’s aware of that. Once he gets back, he’s going to be hungry and healthy.”

The Eagles will also get a lot of help from senior Tre Sullivan, who also brings some height to the table at 6-foot-4.

“Tre didn’t like me much this time last year,” Love said. “I was on his butt about a lot of different things, but now he’s one of our leaders and he might be one of the best athletes in our school.”

Sullivan is part of a special senior class that is ready to go out with a bang.

“It’s all about leadership for us as seniors this year,” he said. “We need to show underclassmen what to expect. We’re doing a great job of that right now and it has to continue. Last year, most of us have some regrets we left on the court. This year, those regrets are gone. We’re just motivated to go further.”

Love credits this senior class for making it fun this year and creating a winning attitude.

“This group of seniors is special to me because when they were younger in middle school, they didn’t win much and weren’t very good, but they stuck with it,” he said. “We get each other and know how to work with each other. It’s a lot of fun right now.”

In addition to Sullivan and Nelson, Luke Love is also going into a senior season, and while he didn’t get a lot of minutes last year, he’s improved tremendously and will be a key leader as well. His main goal this season is to help his team reach its full potential.

“We didn’t reach our potential last year,” he said. “We could have gone deeper. It was disappointing, but I’m glad we went through it. I’ve learned a lot about our team and it’s a feeling I never want to go through again.”

Oak Mountain will also get help from other key playmakers like Stone and Wilder Evers, as well as Brody Dunn, who is the younger brother of last year’s leading scorer Drew Dunn. While Drew graduated, Brody is expected to be a similar shooter from beyond the arc.

Going into the season, Love and the team are hoping to drastically improve rebounding the ball, which made the difference in most of their close losses last year.

“I still have four or five offensive rebounds that haunt me from Thompson in area tournament,” Chris Love said. “We have to be a better rebounding team.

“We also need to be a better defensive team. We have the ability to run up and down the floor to pressure more defensively. We have size and a lot of athleticism. At some point, you’re going to have to defend and execute in the half court to win championships.”

Both areas of concern will be key for the Eagles, who will again be competing in a very difficult area featuring Hoover, who beat Oak Mountain twice by 12 points or less last year, Thompson and an improved Tuscaloosa County team.

The Eagles look poised for a special season, however, and look like one of the early favorites for an area title should the talent pan out.

Oak Mountain will start the season on Tuesday, Nov. 19, with a road matchup against county foe Helena.

Thompson, Helena and Briarwood in final rankings of 2019