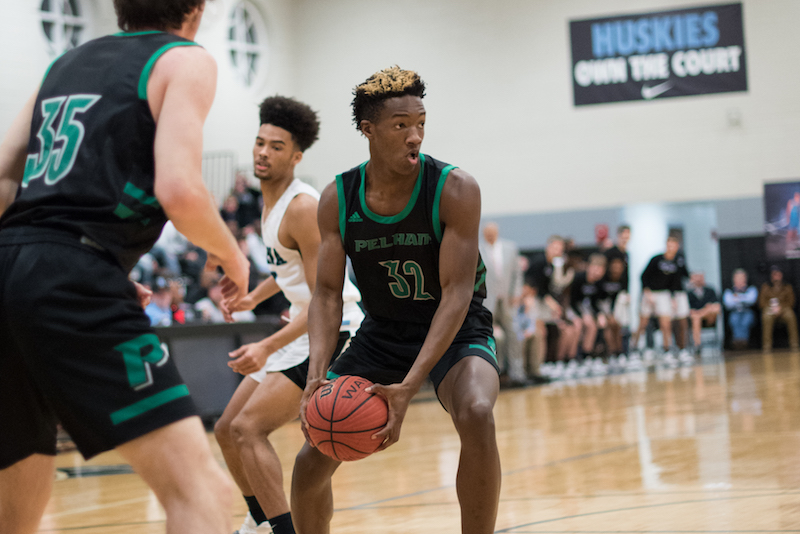 The Pelham Panthers will have a good balance during the 2019-20 basketball season as they look to get back to the postseason after missing it last year. (File)

After a 10-5 start last year, the Pelham Panthers went on to lose eight of their last 12 games, including a first-round exit from the postseason, but the Panthers lost all but two of those games by 12 points or less and were extremely close to a much better season.

Now, heading into the 2019-20 basketball season, Pelham will return two double-figure scorers and a team ready to turn those close losses into wins.

“I’m very excited for this group,” head coach Joel Floyd said. “It’s a young team and a wait and see kind of thing, but I’m looking forward to potential of this group and what they can do. We should be drastically improved by January from where we are now.”

That would be the major difference from last year to this year if it’s able to happen, but the Panthers were on the verge last year only losing a couple of games via blowout and beating both Calera and regular-season area champ Chelsea during area play. They were also on the brink of beating Helena in the first round of the area tournament before losing 40-37.

“We need to close games this year,” senior point guard Blake Floyd said. “That last area game against Helena, we were up 12 at halftime and ended up losing.”

Floyd will bring back 11 points, five assists, three rebounds and one steal per game this season, and will be joined by forward Kendan Maddox as a returning starter.

Maddox, who stands around 6-foot-7, 215 pounds, averaged 11 points, six rebounds and one block per game last year as a sophomore. Now, as a junior, he’ll play a big role as one of the most athletic players in the county.

“Kendan will be an X factor for us because of his size and athleticism,” Joel Floyd said. “He can jump out of the gym. We’re looking to run things through him and we’re also going to look for Blake to do more for us this year. He should be ready to take a bigger role now that he’s in year three.”

Maddox, however, will have some big shoes to fill as the big man on the floor with Alex Reese, now at Alabama, and Chris Brown having been the previous two post players.

Brown was a player who averaged 17 points, nine rebounds and two assists per game last year and finished his career with 950 points.

“Losing Chris Brown is something that will be a tough thing to replace,” Floyd said. “He was on varsity for three years. He anchored the middle for two years and did a little bit of everything for us. There is no guy that has a higher IQ than him. The first time we were playing teams and going over stuff and he recalled plays and things they ran last year. He would call it out in practice to get guys ready. He was able to take away plays because he was able to read what was coming.”

His leadership will be difficult to replace, but the Panthers will be glad to see Xavier Lankford back on this year’s team.

Lankford gave up basketball last year because of his focus on football, but Floyd has convinced him to come back for his senior season.

“I don’t think I’ve ever been around a young person that is a leader like Xavier Lankford has been on and off the court,” Floyd said. “That’s insurmountable to this team.”

Pelham will also get help from senior Josh Lacey, who tore his ACL and missed all of last season, as well as senior Nate Rottier.

“I’ve learned a lot about being a leader and how to get the team on the right track,” Rottier said. “Chris really helped with that. We have a really close knit group that is going to be fun to watch this season.”

The team’s closeness was shown during a preseason challenge Floyd has put together for his team each year.

The team always does a six-minute mile test. If the players run it in six minutes or less at the beginning of the preseason, they get to skip some of the workouts and other moments. This year, four or five guys were able to do it.

Then, at the end of the preseason, the team does it again. The most that had ever done it was 10-11 players, but this year, a school-record 16 were able to finish the challenge in the allotted time.

One player wasn’t able to do it with the rest of the team and had to do it after school. While he was running by himself, the team was there cheering him on. Some of the guys ran laps with him and by the end, he was almost falling over, but at 5:558, he made it across the line and everybody went crazy.

“That was special to see the guys that bought into it,” Floyd said. “You’d be surprised how excited they got. To me, that shows how close of a team we have and the kind of leadership we are going to have this season.”

Going into the season, that’s the main focus. Floyd said he wants his team to find a way to battle through difficult times, and he wants the players to lift each other up.

“We’re trying to figure out how to battle through tough times,” he said. “When you run into a wall, you have to find a way to get around it. We’re testing them physically and mentally to get them prepared.”

From a basketball standpoint, this year’s team is going to focus on making the extra pass when set up in the half court, while no one will be standing still.

“We joke we run more than the cross country and track teams,” Blake Floyd said. “One of our main focuses is to push the ball up the floor and to always be moving.”