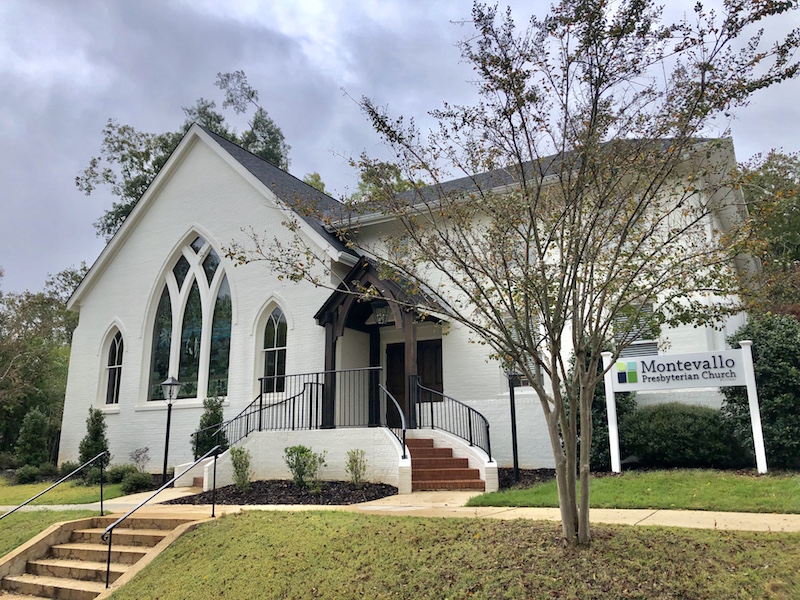 A dedication service for Montevallo Presbyterian Church’s rebuilt sanctuary will be held at 11 a.m. on Sunday, Nov. 10. (Contributed/Tonia Eden Mayton)

MONTEVALLO – Members of Montevallo Presbyterian Church’s congregation are preparing to celebrate the start of a new chapter in the life of the church following a season of transition.

The day of celebration comes two years and seven months after the more than 100-year-old sanctuary sustained extensive damage during a storm.

On April 3, 2017, a large oak tree fell on the building, damaging the roof and windows, including the church’s large stained-glass window.

“I tell people the tree did not fall on the church, the tree fell through the church,” said Don Clayton, who chaired the church’s rebuild commission during the rebuild project. 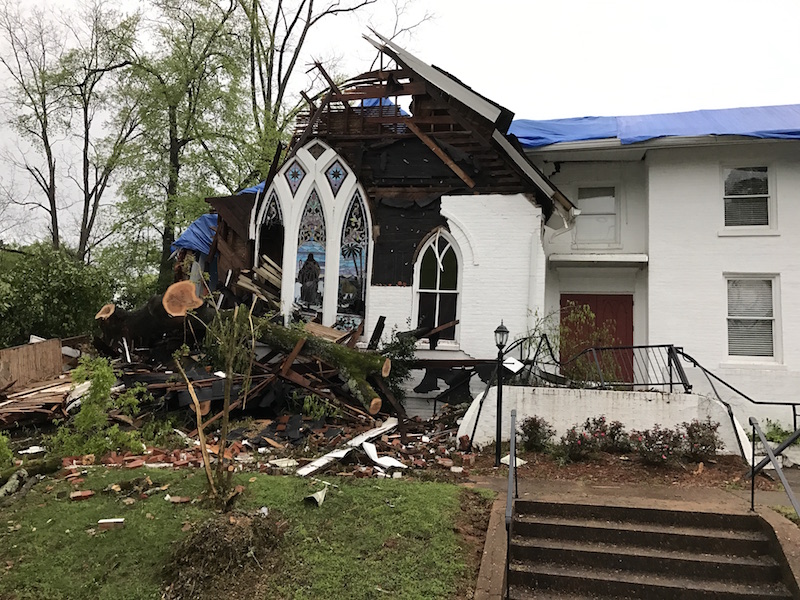 The church’s sanctuary had to be rebuilt after a large oak tree fell on it during a storm in April 2017. (Contributed)

The task of rebuilding the sanctuary while preserving the historical character of the building weighed heavily on Clayton and other members of the commission, including Michele Pawlik, Tonia Mayton, Mike Pickett, Casey Pilgrim, David Chandler and the Rev. Lindsey Wade, the church’s transitional pastor.

Worship services moved to the Forbes House, a building that houses the church offices.

“It was hard on the congregation for a while, but we stayed with it,” Don’s wife, Jane Clayton, said. “We were just fortunate in getting it built back.”

Pawlik said the church was grateful to have worked with Lauren Barrett, principal architect with Barrett Architecture Studio, and project manager Ryan Harbuck with Hancock Construction, and to have had the community’s support during the rebuild.

“They’ve just responded with lots of affirmation,” Pawlik said. “We were just really fortunate in many ways.”

The new sanctuary occupies the same footprint as the original structure, which had to be demolished for safety reasons, according to Pawlik.

The silver lining of the situation was the building underwent upgrades that will benefit the church for years to come.

For example, insulation was added in the walls and floors, all electrical wiring was brought up to code, lighting was improved and the restoration of the tongue-and-grooved ceiling has improved the acoustics.

“Even though this was very hard, we came out with a much better building,” Pawlik said. “It is much more eco-friendly.”

“We feel like we’re starting fresh in the 21st Century,” Jane said.

The pews could not be restored, so new pews built by Rainsville Church Pew Company were installed.

The church’s iconic Good Shepherd stained-glass window was the source of much concern among church members.

“Everybody was heartsick when the tree destroyed the stained glass,” Jane said. “We wanted to get that window back.”

Since the original pieces of glass did not match new pieces, the entire window had to be redone from scratch, she said.

Keith Jones, artist and owner of Birmingham Artglass, took on the task of recreating the window.

Members funded additional stained-glass windows to be dedicated in honor or in memory of other congregation members.

Sculptor and former University of Montevallo professor Ted Metz restored the cross that is displayed behind the pulpit, and he and his wife Robin made a new baptismal and communion set.

“We were able to preserve the original character of the church while bringing it up to today’s standards,” Pawlik said. “It has really been an amazing process. We just feel so good about how it came out.”

Wade had not started officially working as the church’s transitional pastor when the tree fell on the sanctuary.

“I had already agreed to start in May when I got a call letting me know that my job would also now involve rebuilding a sanctuary, and that I could back out if this was more than I wanted to take on,” she said. “I’d never worked with a church going through a rebuild, but I figured we’d have lots of help and this was a congregation who was up for this challenge, so I decided to go ahead and start as the transitional pastor as planned.”

Wade said the process was not as hard as she was afraid it might be, especially given the people the congregation chose to be on the rebuild commission, the church’s insurance company being great to work with and other churches, people from denominational agencies and community members stepping up to help.

“The Presbyterian Church (USA) is a connectional denomination and it was a blessing to know we weren’t on our own,” Wade said. “God definitely led many good people to walk with us as we grieved, healed and rebuilt.”

Although the rebuild project came at the same time the congregation was in the process of calling a new pastor, Wade said many good things came from the situation.

“The congregation was able to honestly think about how God wants them to use the church building space and evaluate who they should be as a part of the body of Christ moving forward,” she said. “It was exciting to be a part of all of the discernment that went on over the past couple of years and even though I won’t be part of the congregation’s leadership anymore, I am looking forward to watching how God uses Rev. Hamilton-Poore and the congregation from afar.”

As a Presbyterian minister, Hamilton-Poore has served a variety of churches in different states and taught at a school for several years.

He and his wife, Terry, who serves as pastor of First Presbyterian Church of Birmingham, moved from Wisconsin to Alabama in January.

“I’m thrilled to be their new pastor and to be called to this church,” he said. “It’s a great church. I’m walking into this dedication service not having been part of the rebuilding, but celebrating with them.”