The Spain Park girls basketball team got two clutch free throws late from Alanah Pooler to pick up a thrilling 56-55 victory against Anniston on opening-night. (For the Reporter/Dawn Harrison) 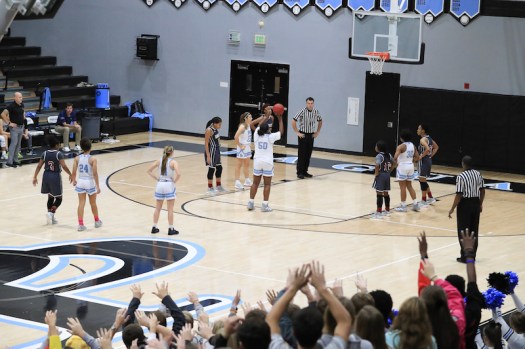 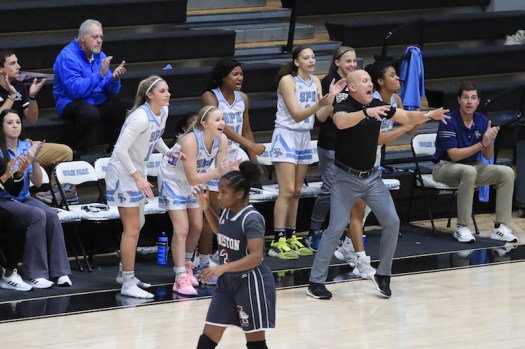 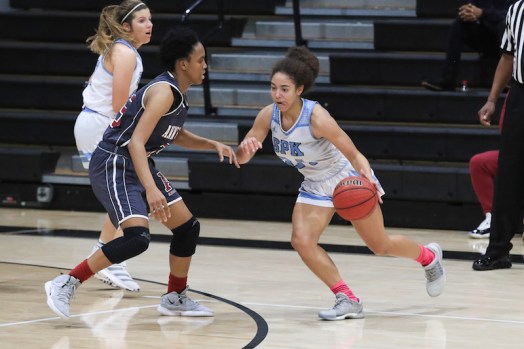 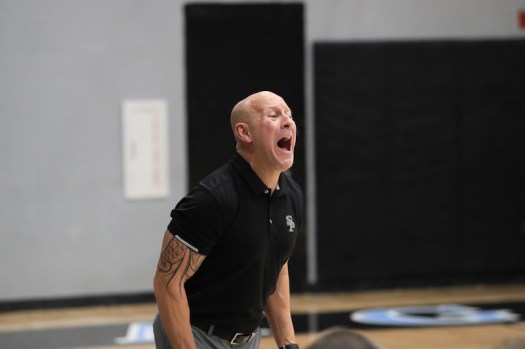 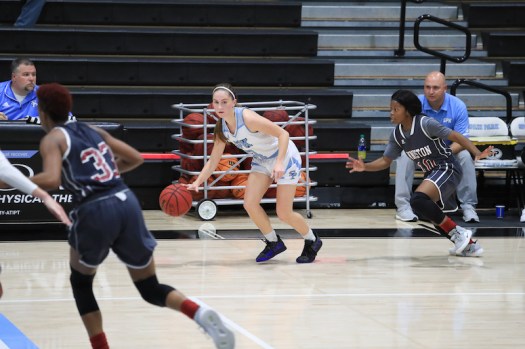 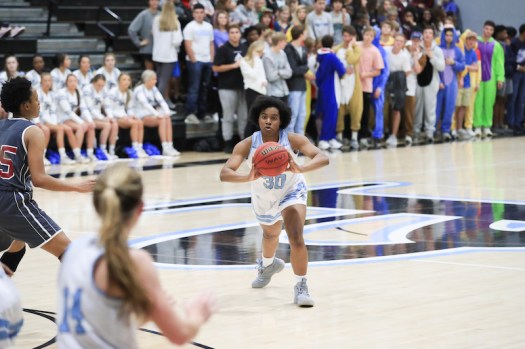 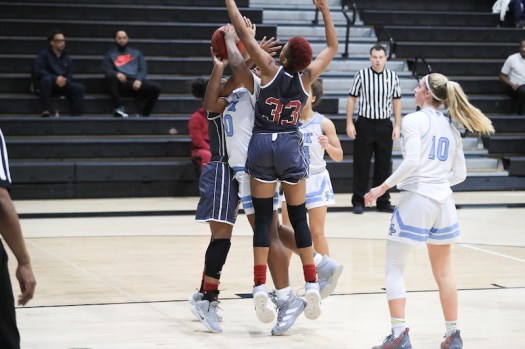 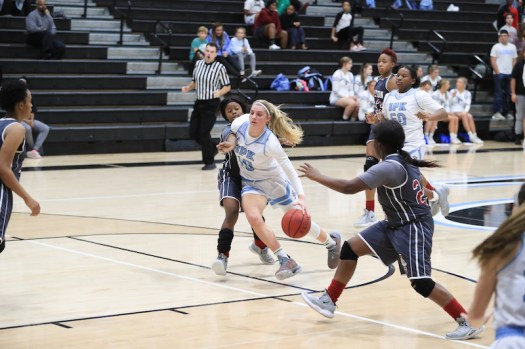 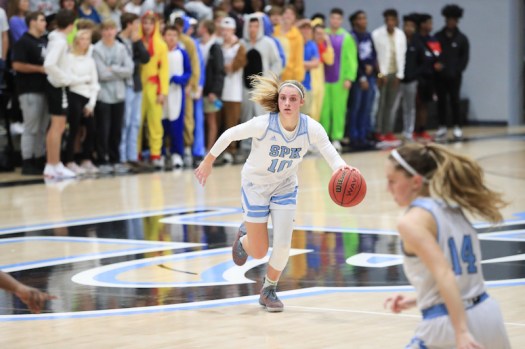 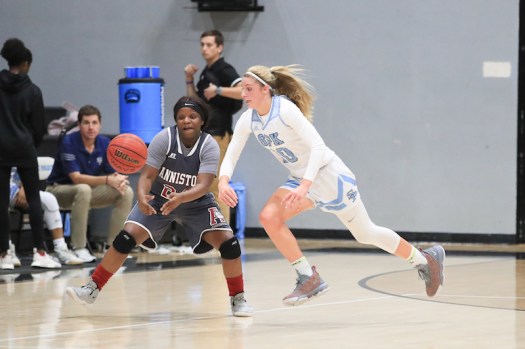 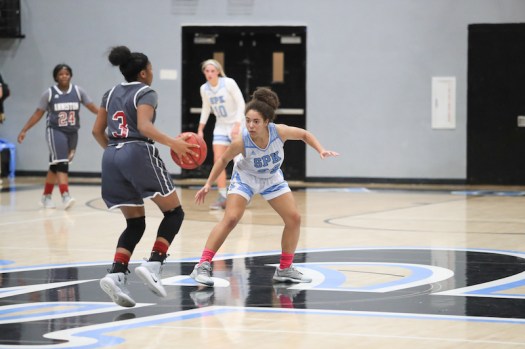 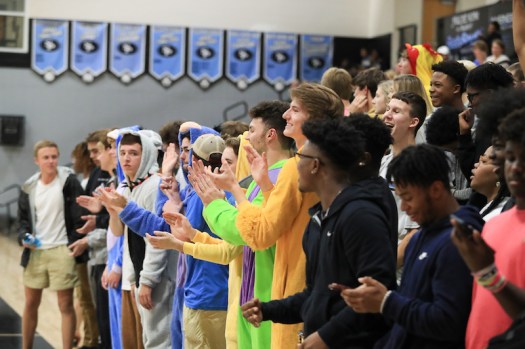 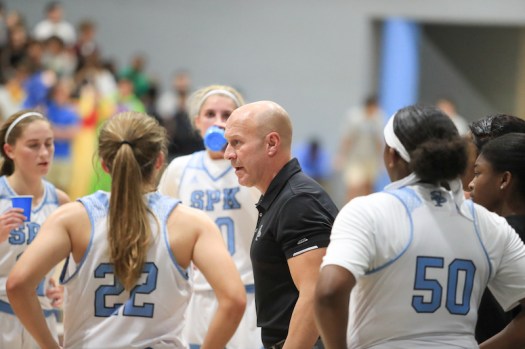 HOOVER – Despite losing star senior and Georgia commit Sarah Ashlee Barker early in the fourth quarter with a slim lead in the final minutes, the Spain Park Jaguars were able to have several players step up down the stretch to lead the Jags to a season-opening 56-55 win over Anniston on Thursday, Nov. 7.

Up 48-43 when Barker left after struggling with cramps throughout the second half, right after Camille Chase had hit a 3-pointer, the Jags struggled to find a scorer.

Jaycee Haynes, however, hit her only basket of the night, a 3-pointer, to put Spain Park up 51-45.

Chase then brought the run to halt when she drained her last of three 3-pointers in the game to put Spain Park on top 54-52 with 50 seconds to play. But Anniston continued its hot shooting and answered with a 3-pointer of its own to quickly regain the lead at 55-54 with 32 seconds remaining.

Holding the ball for a late shot, Alanah Pooler was able to grab the ball in a battle in the paint before eventually being fouled and sent to the line with 8.2 seconds remaining.

As calm as she could be, the freshman stepped to the line and sank both in a clutch moment early in her high school career, which gave Spain Park a 56-55 lead.

On the ensuing inbounds pass, Anniston attempted a pass up the sideline, but it was intercepted by Spain Park’s Katie Flannery. After a missed free throw, Anniston turned the ball over again, which ended the game and gave the Jags the opening-night victory.

The first two quarters were tightly contested and it started with a back-and-forth opening quarter that saw Barker jump out to a strong start as she has so many times over the last four years.

She posted all 11 of the Jaguars’ points in the first quarter behind two 3-pointers and four total made baskets, including an and-1.

But she was matched by a strong start from Anniston’s Allasha Dudley, who posted nine points and also helped the Bulldogs total 11 in the quarter to even the score at 11-11 through one period of play.

The Jags scored the first two points of the second period to regain the lead at 13-11, but Anniston answered in the form of a 10-1 run that put the Bulldogs on top 21-14 midway through the quarter.

But Barker and the Jags had an answer. After Anniston took a 23-15 lead, Avery Masdon hit a 3-pointer to cut the deficit to five. After that, Katie Flannery hit another 3-pointer and Barker got two offensive rebounds that led to points, one of which was an and-1 that put the Jags in front 26-25 with a 12-4 run.

Anniston took the lead back late in the half at 26-27, but with five seconds remaining in the second quarter, Barker took the ball around the top of the key, dribbled baseline and kicked the ball back to Camille Chase, who buried a 3-pointer as time expired to put the Jags in front 29-27 at the half.

Barker ended the half with 18 points.

Anniston answered, however, with a 13-6 run after that as the battle of runs continued to make it a 41-40 game late in the quarter. The Jags got one more offensive put back on a night where they controlled the glass when Alex Baskin put one in to give her team a 43-40 lead heading to the final quarter.

That’s when the Jags were able to hold on for the win behind Pooler’s free throws.

The Jags (1-0) were led by Barker with 25 points, all of which came in the first three quarters, while Chase added nine points. Masdon, Pooler and Flannery all ended the game with five points each.