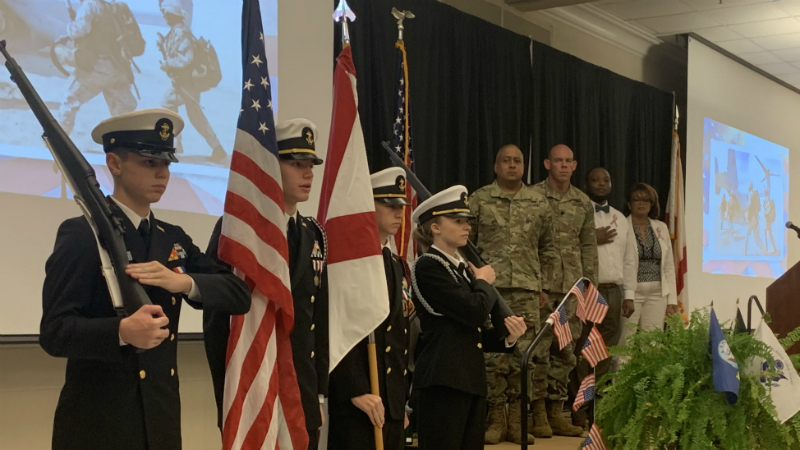 Three military service members with ties to the college spoke at the Shelby-Hoover Campus’ Judy Merritt Health Sciences Buildings as part of “Beyond the Front Lines: Missions of Hope and Healing,” on Wednesday, Nov. 6.

Members of the Calera High School NJROTC posted the colors to begin the ceremony, The Sentimental Gentlemen Quartet sang the national anthem, and Chaplain Darren Kennemer of the VA Hospital in Birmingham gave the invocation.

“One thing I think we should all agree on and that’s that we should honor our veterans and the sacrifices they have made for us,” Brown said about a time of political divisiveness in the country.

A U.S. Army video about “winning hearts and minds” was shown prior to the first guest speaker, Staff Sgt. Amos Wilcoxon, retired U.S. Army, who served two tours of duty in Afghanistan and one in Iraq.

“As a soldier and a human being, I became inspired by the growth of the Iraqi Army,” Wilcoxon said about the group’s treatment of women and other considerations.

Another video was shown, this one on the National Guard’s disaster and humanitarian response.

Then, Lt. Col. Mike Davenport with the Alabama National Guard talked about serving both in a rural region of Afghanistan as well as in Tuscaloosa following the 2011 tornadoes.

“It was amazing to be in Tuscaloosa and see Auburn students there, you all know about the rivalry, two to three days later,” said Davenport, who lives in Helena.

Davenport noted the resiliency of the storms’ victims and the emotional connection felt by responders because “it’s your backyard.”

“The fact they appreciated us made us work that much harder,” Davenport said.

Maj. Darold Carson of the Alabama National Guard said he served in the Air Force but moved to a civilian role, working at a bank across the street from a National Guard building.

“I was like, you know what, I’ve still got a dream, and that dream was to be a pilot,” Carson said.

Carson said he is thankful for his time in the military, which has provided a sense of family and given him focus.

A breakfast reception followed the program, and attendees also had the opportunity to obtain information from various veteran service organizations that had representatives present.