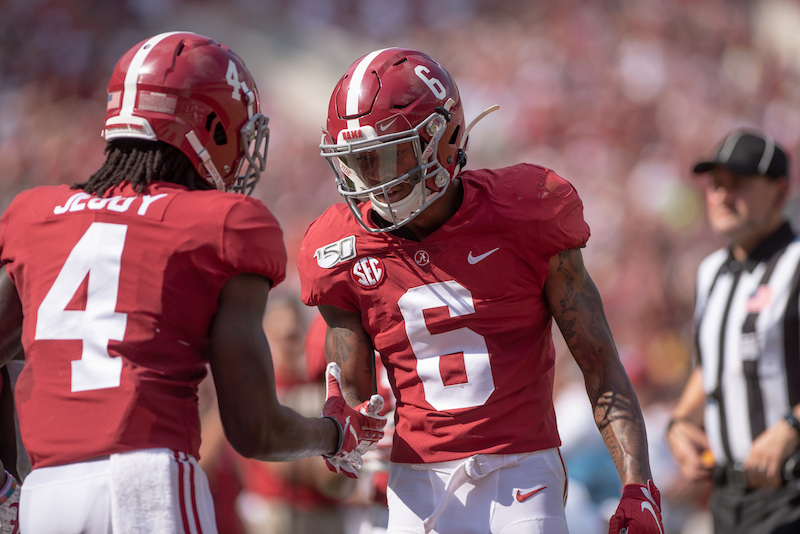 Alabama will welcome LSU to Bryant-Denny Stadium today in a matchup of the No. 2 Tigers and No. 3 Crimson Tide. (Reporter photo/Keith McCoy)

TUSCALOOSA – The smoldering question surrounding No. 2 LSU’s trip to Tuscaloosa to take on No. 3 Alabama this Saturday is whether or not Crimson Tide starting quarterback Tua Tagovailoa will take the field.

All signs aren’t just pointing toward him starting, but to him being healthy just three weeks after having tightrope surgery on a high ankle sprain.

That sets the stage for Tagovailoa and LSU quarterback Joe Burrow to go head-to-head in a top-two battle that doesn’t just have implications for the SEC West and College Football Playoff, but possibly the Heisman race as well.

With both teams that highly regarded each year, you’d expect them to trade wins every now and then, but Alabama has won the last eight in a row and 10 of the last 12 in this series.

Oddly enough, however, the last time LSU won in the series was the “Game of the Century” back on Nov. 5, 2011, when No. 1 LSU beat No. 2 Alabama inside Bryant-Denny Stadium.

Battle of the quarterbacks

Burrow will enter this game as the second best quarterback in the country from a passing yards and touchdown perspective. He has thrown for 2,805 yards and 30 touchdowns this season, which are both second only to Anthony Gordon of Washington State, as he’s throwing for 350 yards per game.

While Tagovailoa ranks 25th in total passing yards with 2,166 due to his injury, he’s thrown for 309 yards per game and has 27 touchdown passes to just two interceptions.

While Alabama has gotten some flak for its strength of schedule, and while LSU has played two difficult top 10 opponents in Florida and Auburn, those are the only two defenses Burrow and LSU have faced ranked inside the top 50 this season.

Alabama’s schedule hasn’t featured a top-10 opponent yet, but Tagovailoa and the Crimson Tide have played three defenses ranked inside the top 40 this season—Texas A&M (29th), Tennessee (39th) and Duke (40th).

Also, both of those difficult tests for LSU came in Baton Roughe, Louisiana on the Tigers’ home field inside of Death Valley.

This will be their first difficult road test since Texas, who the Tigers beat 45-38 in the second week of the season.

Burrow is going to put up big numbers in this offense, but going into the most hostile environment he’s seen this season against the 16th ranked defense in the country could play a factor in this game, while Tagovailoa will be in front of the home crowd.

Helping the quarterbacks out

Both teams have tremendous talent both out wide and in the backfield to help take some pressure off the quarterback position.

At receiver, LSU has both Justin Jefferson and Ja’Marr Chase ranked inside the top 20 in receiving yards this season with 819 and 749 yards, respectively.

Alabama isn’t too far behind with Devonta Smith and Jerry Jeudy both in the top 31 thanks to 721 and 682, respectively. All four of those receivers either have eight or nine touchdown catches this season.

LSU also has the benefit of Clyde Edwards-Helaire, who is the nation’s 49th best running back with 683 yards and eight touchdowns so far this season.

Alabama’s Najee Harris isn’t too much farther down that list with his 642 rushing yards and five touchdowns this season.

Whichever role players step up this Saturday to help their quarterback out will likely be the team that wins. The fact that there are close to eight future NFL receivers on one field between the two teams, as well as two future NFL quarterbacks throwing to them, is one reason this game has as much excitement as it does.

Which defense has an edge

This is where this game will be won or lost.

While both offenses have gotten a ton of credit this season, and rightfully so, we’ve heard a lot of chatter about the defenses not being as good as usual.

But both units rank inside the top 23 of total defense. Alabama brings the 16th best defense into the game, while LSU brings in the 23rd best defense.

For LSU, however, their defensive unit took a big hit when it was announced on Monday that starting middle linebacker Michael Divinity was no longer with the team. He was a player for the Tigers that had posted 22 tackles, four tackles for loss and three sacks.

As a unit, LSU has 20 sacks this season, but the Tigers are going up against an Alabama offensive line that is one of the best in the country at preventing sacks having given up just nine all year.

Alabama on the other hand has 19 sacks on the season, while LSU has struggled giving up 15 so far this year.

The Crimson Tide also lead in a category they haven’t in a while with the country’s best turnover margin. Alabama has turned the ball over just five times this season, while they have gained 18 turnovers.

The Tigers have turned the ball over eight times and gained just 12 turnovers.

In a game that will likely feature a lot of throwing the ball, the turnover battle becomes important to watch, especially for Burrow who is going up against an Alabama defense that has 10 interceptions so far this season.

But one of the most important statistics defensively in this game will be which one gets off the field on third down.

LSU’s defense has allowed 39 third down conversions in 120 attempts, while Alabama has allowed 40 in 115 attempts.

It will be important for the Crimson Tide to get off the field while they can because LSU boasts the top Red Zone offense in the country.

While all the talk is about both offenses, don’t be surprised be a more defensive game. Right now, the over-under line is set at 64 points, and I wouldn’t be surprised if the under hits in this one.

You’ve got two defenses that are traditionally good and have been somewhat disrespected this year despite being extremely talented.

Even last year, with Alabama’s talented offense, the Crimson Tide won just 29-0 on the road.

If the game does play out to be lower scoring, the real key will come down to turnovers and getting off the field on third downs.

I think with home field advantage and a healthy Tagovailoa, the Crimson Tide should be able to make the plays to win this.