Briarwood, Thompson gear up for round 2 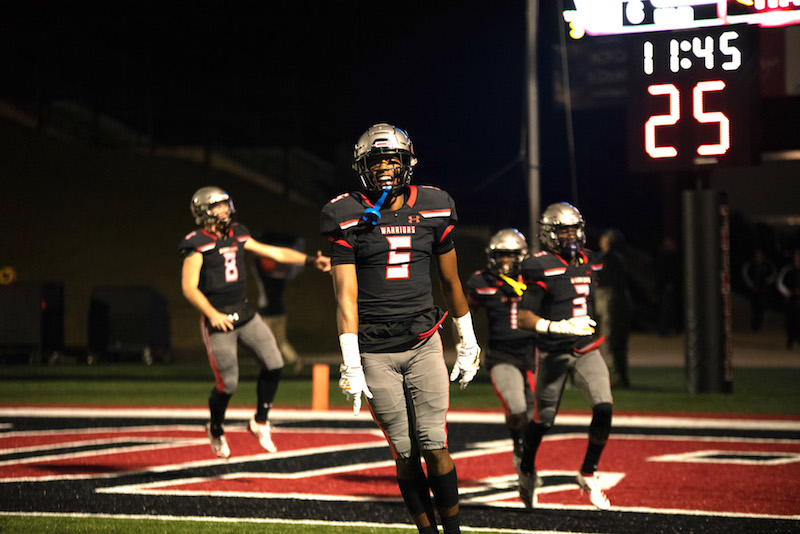 The Thompson Warriors will host Florence in round two of the playoffs, while Briarwood will travel to Jackson. (Reporter photo/Keith McCoy)

In a season of survive-and-advance, the county’s two best teams at the start of the season have moved on to the second round of the postseason after both Briarwood and Thompson picked up dominant wins to open the 2019 playoffs in their respective classification.

Can each keep their season alive for another week?

Coming off a dominant 54-20 win over Austin in the opening round, a game the Warriors led 47-7 at the half, Thompson will now host a Florence team that lost to Austin 30-25 earlier in the season.

But since then, the Falcons have become a much better team. They have now won five in a row after taking down Mountain Brook 24-21 in round one a week ago, and it’s all because of the defensive side of the ball.

Florence hasn’t lit up the scoreboard much this season and has scored 33 or less in all but one game this season, but the defense has given up 23 or less in its last five games and 14 or less in three of the last four.

When Thompson struggles this season, it’s because offenses are able to move the ball, and specifically convert third downs.

And while their defense has been good, Florence struggled against the only really talented offenses they’ve played, losing 51-20 to James Clemens and 41-14 to Brentwood Academy (Tennessee).

Now taking on a Thompson offense that scored 50-plus points for the third time this season a week ago against a team Florence lost to, it’s going to be tough for the Falcons to match up with the Warriors’ offensive playmakers.

It’s an offensive unit that’s averaging 44.2 points per game and has scored 40 or more points in seven of 10 games this season.

It also helps when your quarterback gets back to his efficient ways, and against Austin, Sawyer Pate went 12-of-12 for 226 yards and four touchdowns. When that happens, it means he’s getting the ball into the hands of several talented playmakers that can take it to the house. If he’s in that same mode this week, it’s tough for any defense to shut down this offense.

That pairs nicely with a defense that has also played pretty consistent this season and is giving up 20.9 points per game. On the defensive side, the Warriors have held all but Hoover and Hewitt-Trussville to 23 points or less.

From a pure talent standpoint, Thompson should win this game.

But, the Warriors have to continue to play with a chip on their shoulders and they have to play clean football.

Thompson was also probably better than Hewitt-Trussville, who handed the Warriors their only loss of the season three weeks ago. Penalties, however, were a killer.

Against the Huskies, Thompson had 12 penalties for 105 yards—something that has been a problem all year. But in the first round, the Warriors had just five penalties for 30 yards.

They also got off the field on third down, which had been a problem near the end of the season. Against the Bears, Thompson allowed just four third down conversions in 12 attempts.

If the Warriors can have the same hunger they had in round one and can avoid penalties, while getting off the field on third down, they’ll win this game. In a sense, the only ones that can beat them are themselves.

There may not be a team more dangerous than Briarwood right now, and the scary part of that is the Lions don’t think they are playing their best football yet.

But coming off a 42-26 win over Marbury in the first round of the playoffs, Briarwood has now won nine in a row, including wins over Ramsay and Hueytown in the last four weeks.

While the offense has been a rollercoaster ride this season playing several difficult defensive opponents, the Lions’ defense has been about what you’d expect from a Briarwood defense.

It’s a unit that has given up 28 or less points in every game this season and 20 or less in eight of 11 games so far. Right now, they’re giving up an average of 16.1 points per game, and can also make game-changing plays on special teams with several blocked kicks and touchdowns from that unit as well.

In round two, however, they’ll face a team that has a similar defense and will be a tough out.

Jackson is coming off a 29-7 win over Rehobeth in the first round, which marked the fifth time this season the Aggies have given up seven points or less. It’s a defensive unit that has given up just 15.8 points per game this season.

And while Jackson holds an overall record of 6-5, two of those losses were forfeited loss in games the Aggies won 61-34 and 38-6. After that, they lost to undefeated Faith Academy 27-7 in a region game, a good Demopolis team 32-27 in a non-region game and Baker 14-6 in a non-region game.

With only one loss in region play aside from the two forfeits, this would have been a two-seed Jackson team going into the playoffs instead of a three-seed.

But the way Briarwood is playing right now is a tough fact to overlook. The Lions already have one of the best defenses that Jackson will have faced, but their offense gets better every week.

It’s a unit that was led by Luke Prewett for much of the year as a running back that can go over 100 yards any given week. But over the last few weeks, Prewett was injured, and in stepped Luke Reebals.

Reebals has gone over 100 yards the last three weeks in a row on the ground as a sophomore. Now, with Prewett healthy again, that backfield duo has become possibly the best one-two punch in the 5A classification.

Alongside those two, freshman quarterback Christopher Vizzina has done a great job making plays when he needs to as well. He’s formed a really good connection with receiver Blake McKenna, which may be something to watch if the Jackson defense pays too much attention to the running backs.

That combined with all of those talented players behind one of the best offensive lines in the classification is dangerous.

If the Lions can jump in front and play with a two-score lead like they did in the first round, it’s a defense that won’t give that up. It will be tougher than the opening round, and a loss is a possibility, but this team is playing its best football of the season and seems to only be getting better.