Bourland uses experience to help others through grief

“You receive more trying to give to others. It’s a blessing to use an awful experience to be able to give to someone else. It is a life lesson we learn the most from,” said 71-year-old Adrienne Bourland, who for the past eight years has given back to others as a Peer Mentor with Tragedy Assistance Program for Survivors (TAPS). 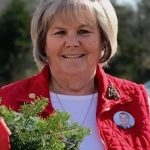 Adrienne Bourland has been able to use her own experience with grief from losing her son, Kenneth, to help others struggling with loss. (Contributed)

She and her spouse of 51 years, Dennis, became Gold Star Parents when Kenneth, their son, was killed during active duty in Haiti in 2010. The Air Force Lieutenant Colonel was 37 years old. He left behind a wife, a 3-year-old and a 1-year-old.

Her work with TAPS is one way Adrienne has continued her own healing while helping others work through their grieving process.

She is on call 24 hours a day to provide one-on-one guidance and encouragement while instilling hope in those who are struggling to move through their own pain.

With delegations in 33 countries, it offers a host of programs to aid the survivors of men and women who have died in the wake of active duty. Services include seminars, retreats and an online community.

Bourland is also a volunteer with the Alabama National Cemetery Support Committee and Wreaths Across America.

“Wreaths Across America integrates the holiday with memory of those who are no longer able to be with family on the holiday,” said the Chattanooga, Tennessee native.

One might say that to some degree the family is able to be with them.

The entire Bourland family participates in the December event. One year, the Bourlands’ daughter, Kellie, was the branch flag presenter for the Flag Pole Ceremony, and Kenneth’s son, who was just a toddler at the time, led the Pledge of Allegiance.

A BellSouth phone company and telephonic systems retiree, Adrienne was a member of Telephone Pioneers of America, where she participated in fundraising efforts to support the Pioneers education programs, life enrichment for people with disabilities and for senior citizens, stocking area food pantries, natural disaster response, environmental causes, as well as projects and initiative that support veterans and their families.

Bourland’s tenure as a volunteer has involved work with the North America’s only adult cancer camp, Camp Blue Bird. Each fall campers enjoy a three-day, two-night excursion at Camp McDowell in Nauvoo, Alabama. Canoe camp for children, Camp Smile-a-Mile, and Ruffner Mountain Nature Preserve are programs Adrienne is proud to have been a part of.