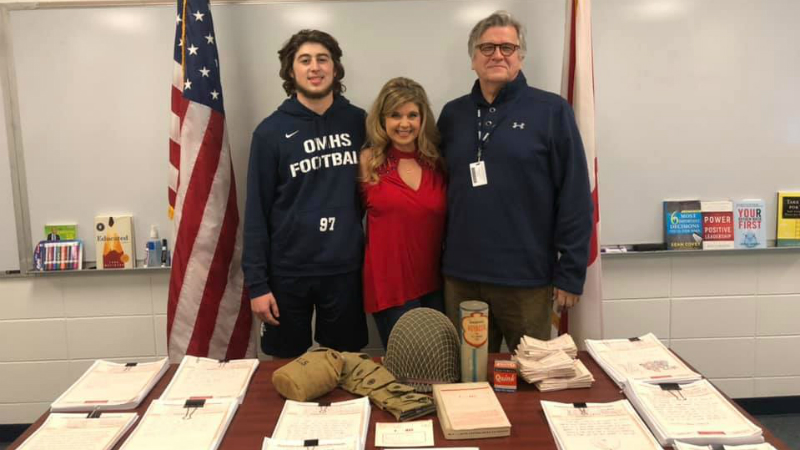 OMHS history teacher John Croom with the 1,500 V-mails that were written to Paul Kirkpatrick, grandfather of Shelly O'Brien, and great-grandfather of Braxton O'Brien. (CONTRIBUTED)

NORTH SHELBY – History teachers at Oak Mountain High School recently turned a request to write letters to World War 2 veteran into an opportunity to teach students about Victory Mail (V-mail), a valuable tool used by the military during the war to deliver mail correspondence to soldiers.

More than 1,500 V-mail letters were written to Paul Kirkpatrick, who is the 95-year-old great-grandfather of OMHS junior Braxton O’Brien. Every history class at OHMS from all grades participated in the project.

The project began when Braxton’s mother, Shelly O’Brien, contacted the school to see if any of the students would be willing to write a few letters to her grandfather, explained Croom.

“Mr. Kirkpatrick is in hospice, and she was afraid this would be his last Veterans Day,” said Croom. “It became larger when we decided to make it a project for all of our history classes.”

As part of the project, Croom developed a PowerPoint presentation with World War 2 facts, including overall statistics of the largest and deadliest conflict history. Also included in the presentation was background information on the origins of the “V for Victory” slogan and “V-Sign” that were widely used as rallying cries for Allied countries involved in the conflict.

The presentation also included an explanation of V-mail, a hybrid mail process used by the United States during the war as a secure method to correspond with soldiers stationed abroad. According to the National Postal Museum, the system of microfilming letters was based on the use of special V-mail letter-sheets, which were a combination of letter and envelope. The letter-sheets were constructed and gummed so as to fold into a uniform and distinctively marked envelope.

The letter sender would use the special V-Mail sheet to write and mail the letter. The V-mail correspondence was then reduced to thumb-nail size on microfilm and the rolls of film were sent to prescribed destinations for developing at a receiving station near the addressee. Finally, individual facsimiles of the letter-sheets were reproduced about one-quarter of the original size and the miniature mail was then delivered to the addressee.

The smaller size helped to reduce the bulk and weight of the letters, saving valuable cargo room on planes for war supplies. According to the National Postal Museum, V-mail ensured that thousands of tons of shipping space could be reserved for war materials. The 37 mail bags required to carry 150,000 one-page letters could be replaced by a single mail sack. The weight of that same amount of mail was reduced dramatically from just over one ton to a mere 45 pounds.

Croom has collected WW2 memorabilia for several years, including a box of original V-mail sheets and copies of V-mail that was sent to soldiers. The V-mail pictured on the scrapbook page is an example of the size it was reduced to once it was re-printed from the microfilm.

As part of the V-mail project for Kirkpatrick, Croom also detailed the history of his service in the Army, starting with his enlistment at the age of 19. He was stationed in Naples, Italy, where he was assigned to the 682nd Port Company, known as the Longshore Soldiers.

The 682nd Port Company, consisting of about 200 men, was part of the Army’s supply and logistics chain, offloading cargo ships filled with ammunition, bombs, and supplies for the U.S. 5th Army and the 15th Army Air Force in Italy. There were times when Kirkpatrick and the other men of his company were under German artillery fire. This occurred while offloading explosives from ships during the American invasion of Anzio, between January and June of 1944.

Kirkpatrick returned to the United States in December 1945. He worked for Louisville and Nashville Railroad before retiring with 38 years of service. He has been married to his wife for almost 72 years.

In addition to the V-mail project at OMHS, Kirkpatrick will also be receiving letters from third-grade students in Ashley Beavers’ class at Inverness Elementary and from history students at Oak Mountain Middle School.