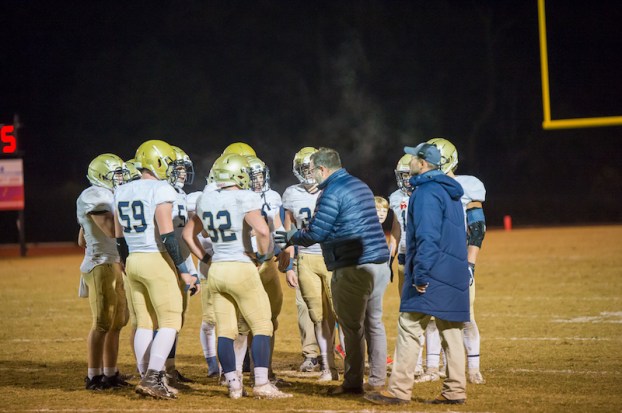 The Briarwood Lions are headed to the Class 5A quarterfinals after taking down Jackson on the road on Friday, Nov. 15. (For the Reporter/Larry Dancy)

Briarwood advances to Class 5A quarterfinals

JACKSON – The Briarwood Lions held the Jackson Aggies to just two scores Friday night, Nov. 15, nailing down a 24-14 road win and thus advancing to the Class 5A state Quarterfinals.

Briarwood’s defense shined, particularly in the second half as they made significant stops and Tyler Waugh doubled the lead on a 35-yard pick six.

Waugh, who also catches on the school’s baseball team, was responsible for two of the three Lions touchdowns Friday night.

“(Jackson) did a good job scheming us up,” said Briarwood Head Coach Matthew Forester. “I’m proud of the grit our guys showed. They persevered. We didn’t want to turn the ball over, and we made that a priority. We wanted to try and put them in bad field position. We expected the defense to step up and do a good job, and they did tonight.”

Forester, a Briarwood graduate himself who served as defensive coordinator prior to this year, said it was special to be able to coach the group he has come to know, particularly the team’s seniors.

“It’s fun being around these players because we’ve been together for several years. They’re hungry and they want to continue on,” he said.

The first quarter was uneventful with no scoring.

Things got interesting in the second as Jackson quarterback DeyJon Hunt scored on a 2-yard touchdown run. Jackson then recovered an onside kick but the Briarwood defense held strong on the ensuing drive.

Following a Briarwood three-and-out, the Lions then found their groove with help from wide receiver Blake McKenna, hauling in a 43-yard reception in the end zone to tie the game at 7 by halftime.

Briarwood received to begin the second half and ended up punting; however, the Lions found themselves with excellent field position after a mishandled Jackson punt snap. The Lions made it count as Tyler Waugh dove across the goal line for a 1-yard touchdown. The resulting score was 14-7 Briarwood with 3:40 left in the third quarter.

The Lion defensive line made some significant stops courtesy of Cal Reebals and Cole Garner, forcing another Jackson punt. Briarwood then blew it wide open in the fourth quarter as Waugh took an interception 35 yards to the end zone.

The Aggies responded as Hunt found Jamaal Pritchett from 31 yards out, cutting the lead in half, 21-14 Briarwood.

The Lions proceeded to eat up the clock on their next drive, setting up a 26-yard Noah Nall field goal with just 1:35 left to play. Those would be the final points of the game, sending the Lions to the quarterfinals to host Bibb County next week.

“Now being the host of the Quarterfinals at Briarwood is a big deal, and we’re excited about this opportunity,” Forester said.

By ALEC ETHEREDGE | Sports Editor ALABASTER – For the third consecutive year, the Thompson Warriors are headed to the... read more