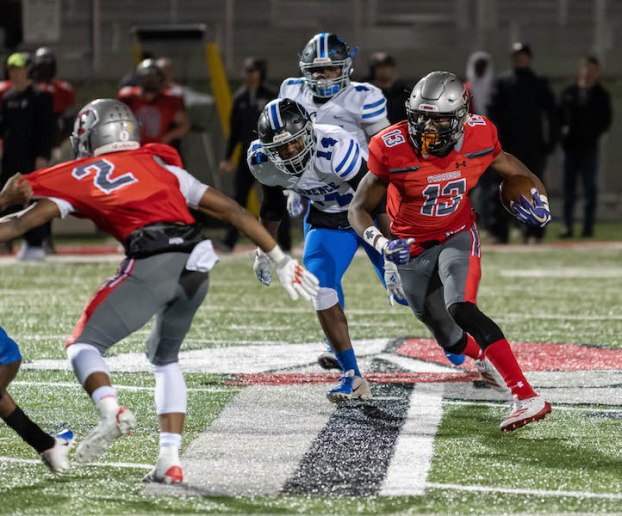 Thompson will host Hoover in the semifinals of the Class 7A playoffs this Friday, while Briarwood will host Bibb County. (For the Reporter/Neal Wagner)

Briarwood and Thompson did exactly what they needed to do to survive and advance on Friday, Nov. 15, now each, with a different storyline, is headed to the third round of the postseason for their biggest games of the season.

The Warriors, who came into this season replacing a large portion of their talent, have done the work and are now heading to the semifinals of the Class 7A playoffs for the third consecutive season. A team that was 0-10 in 2014 and 5-5 the two years after, it’s a remarkable story, and what awaits is just as remarkable—a third consecutive semifinal matchup against powerhouse Hoover.

The Lions, who are under a first-year head coach in Matthew Forester, have put together a remarkable run throughout the season and are now headed to the quarterfinals of the Class 5A playoffs. They started the season 0-2 with losses to Chelsea by three points and Pleasant Grove by 12 points, but that loss to the Hornets was eventually turned into a forfeit win. Since that Pleasant Grove loss, BCS has won 10 games in a row, including big wins against Ramsay and Hueytown, and a strong playoff win last week.

Now, for the third week in a row, the two will have their seasons on the line in their biggest game to date. Can both teams do it again?

Jumping straight to the two biggest keys for Thompson that have been harped on all season, the Warriors have to get off the field on third down and avoid penalties in a game like this.

Against Hewitt-Trussville, Thompson’s only loss of the season, the Warriors had 12 penalties for 105 yards. That seemed to get fixed in a first-round win two weeks later with just five for 30 yards, but last week against Florence, they had 11 penalties for 85 yards, which almost cost them.

In the regular-season matchup between these two teams, they combined for 18 penalties for 165 yards, and eight of those penalties were on the Warriors. This matchup has to be played cleaner.

As for third downs, Thompson gave up 10 third down conversions to Florence in 19 attempts. Those 19 attempts show the Falcons were able to sustain long drives, which is exactly what the Warriors can’t have happen against Hoover.

In the first matchup, the Bucs converted seven of 13 third downs, but it was almost automatic before Hoover starting quarterback Robby Ashford went down with an injury in the second half.

That brings us to the final key for Thompson—shut down Ashford.

Thompson is coming off a defensive performance against Florence where they played good at times, but where they also gave up 112 rushing yards and 106 passing yards to dual-threat quarterback Dee Beckwith, who didn’t even play a large chunk of the second half.

Earlier this season, Ashford almost singlehandedly beat Thompson. He had 126 rushing yards and 261 passing yards before going down with an injury. When he went out, the Warriors capitalized and turned the game around drastically for the strong win.

If Thompson can control those three aspects of the game, they’ll win this matchup because of the dynamic offense they have. Even being outgained 482 to 363 yards in that game, Thompson still put up 48 points and also won the turnover battle 2-0 in that first matchup.

But beating the same team twice in one season is one of the hardest things you can do, especially when it’s one of the best teams in the state’s history and it’s this matchup, which has gone to the revenge team the last two years. I won’t be surprised by either team winning, but that makes me lean in favor of the Buccaneers to gain vengeance.

The biggest positive for Briarwood going into this matchup aside from having won 10 consecutive games is the way the offense handled one of its toughest defensive tests of the season last week against a Jackson team that was giving up just 15 points per game.

The Lions put up 24 points in a 24-14 victory, and now get set to take on an even more difficult defensive test against Bibb County this week.

The Choctaws are 12-0 this season behind a defense that is giving up 10.3 points per game. That side of the ball has been so dominant that it has given up no more than 21 points in a game this season and has held the last six opponents to 16 points or less. In four of those six games, Bibb County has given up six or less with three shutouts.

But Briarwood seems to be drawing this matchup at the perfect time.

Not only are the Lions playing strong defense as well, giving up just 16.8 points per game, but the offense has done its job in wins over good defensive teams like Ramsay, Hueytown and Jackson in three of the last five weeks.

Briarwood has also been battle tested this season with two of their opponents in Ramsay and Pleasant Grove also still in the postseason.

We’ve also seen the Lion’s make play after play against good teams on the defensive side of the ball and on special teams with interceptions and blocked kicks.

Last week, a pick-six from Tyler Waugh was the difference in Briarwood’s win over Jackson, and game-changing plays like that have been the difference all year in their biggest games.

But the offense has also grown throughout the year. With Luke Prewett being the leader at running back for the majority of the season, he went down with an injury against Ramsay and Luke Reebals entered as his sophomore backup.

Reebals has since proven he can carry the load, but now both are healthy which makes the Lions even more dangerous behind one of the best offensive lines in the state. That, combined with a freshman quarterback in Christopher Vizzina that continues to gain confidence behind that same offensive line and in a trustworthy Blake McKenna at receiver makes this team very dangerous at this point in the year.

The biggest key in this game, however, is the offense of Bibb County.

It’s an offense that has scored as many as 54 points this season and has two 50-plus point performance with six games of 40-plus points, but against the best defenses they’ve faced, they’ve scored eight, 13, 12, 14 and 19 points and won three of those games by two points or less.

While I think both of these teams are almost identical and very even, I think this game will play out similarly to those games, but the Lions have shown they can make that one game-changing play defensively or on special teams to make up those few points.

By ALEC ETHEREDGE | Sports Editor ALABASTER – For the third consecutive year, the Thompson Warriors are headed to the... read more