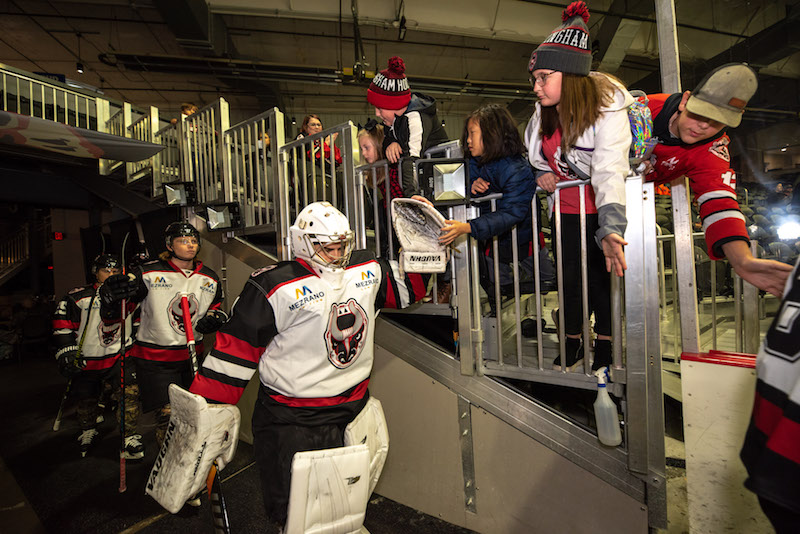 MACON, Georgia – Following a sweep to Pensacola a week earlier, the Birmingham Bulls got back on the winning track on Saturday, Nov. 16, with a 5-3 road victory against the Macon Mayhem.

The Bulls were fueled by two power-play goals in the second and third periods from Matt Fuller and Shaquille Merasty in the win, as they were 2-for-4 on power play opportunities in the game.

It also helped that Birmingham played with the lead throughout the night starting in the first 7:17 of the game when Alex Johnson found the back of the net off assists from Cole Golka and JM Piotrowski.

Macon answered two minutes later on a goal from Jimmy Soper to even the score at 1-1, but the Bulls were able to end the opening period with an unassisted goal from Mike Davis with less than three minutes to play in the period to give his team a 2-1 advantage.

Then, in the first 10 minutes of the second period, Fuller found the back of the net on Birmingham’s first power-play opportunity of the game off great passing from Davis and Merasty.

Now down 3-1, Macon needed an answer and got it on a goal with 5:55 left in the period from Jarret Kup off assists from Ryan Devine and Stephen Pierog.

That seemed to shift the momentum going into the third period, and while the scoring became less consistent for a while, you got a sense that Macon was on the verge of tying the game.

Birmingham, however continued to hammer away shots. After being outshot 15-11 in the first period, the Bulls outshot Macon 16-13 in the second period and then 16-10 in the final period.

But Macon made one of its few opportunities count when Marcus Ortiz evened the game at 3-3 with 6:15 to play in the game.

That’s when the Bulls’ power play really came in handy. Less than three minutes after that equalizing goal, Merasty took advantage of a power play when he buried a shot off assists from Jacob Barber and Lane Valimont.

Taking the late lead, Macon pulled its goalie shortly after looking for an extra attacker to help tie the game, but instead, Josh Harris got an empty-netter to close the game out with 46 seconds to play.

On the night, Birmingham’s power play both offensively and defensively was key. In addition to making two of four attempts, the Bulls killed all five power plays they were put in throughout the game.

At this point in the season, the Bulls have the second best penalty kill percentage and are fourth in power play percentage.

Nine different Birmingham players had points in the win, while Davis and Merasty both had two.

Birmingham will return home on Friday, Nov. 22, for a two-day series against Fayetteville, who is currently 8-0-1 and tied for first in the league.