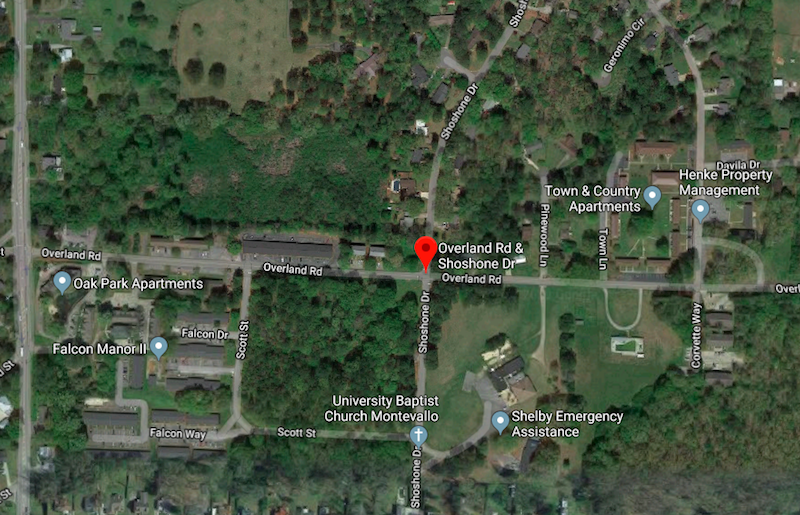 Montevallo’s City Council approved on Nov. 12 a zoning amendment to allow for the construction of the Bluegrass Apartments complex near the intersection of Overland Road and Shoshone Drive. (Contributed/Google Maps)

MONTEVALLO – The Montevallo City Council has approved a zoning amendment to allow for the construction of a multi-family apartment complex on property near the intersection of Overland Road and Shoshone Drive.

The request from Paul Widman, an affordable housing developer, on behalf of property owner Brenda Zigarelli was for the council to approve an amendment to the R2 Special District to allow for a 46-unit, multi-family development consisting of three buildings with 16 units each, instead of six buildings with only eight units each, on the property.

The three 16-unit building plan would bring the development close to maximum capacity for the special district zoning.

A 1.4-acre rectangle of land on the south end of the site would be left undisturbed to create a buffer between the apartment buildings and adjacent homeowners’ property, Widman said during the Oct. 14 public hearing.

Sharman Brooks with Shelby County Development Services said the next phase of the project will involve finalizing site plan details, which will then go back through the Planning and Zoning Commission.

Brooks said a traffic impact analysis performed by Sain Associates in October determined “construction will have minimal impact on studied roadways and intersections,” and the city engineer reviewed the analysis and “concurs with the presented findings.”

That did not satisfy residents who spoke during the hearing in opposition to the development, citing concerns about increased traffic as well as stormwater runoff and decreased property values.

Shelby Emergency Assistance Director Karen Pendleton said she understands residents’ concerns regarding water runoff and traffic in the area, but she is more concerned about the city not having enough affordable housing for people who need it.

The building will have roughly the same footprint as the nine-unit building it is replacing on the property, which is zoned B-2 (general business).