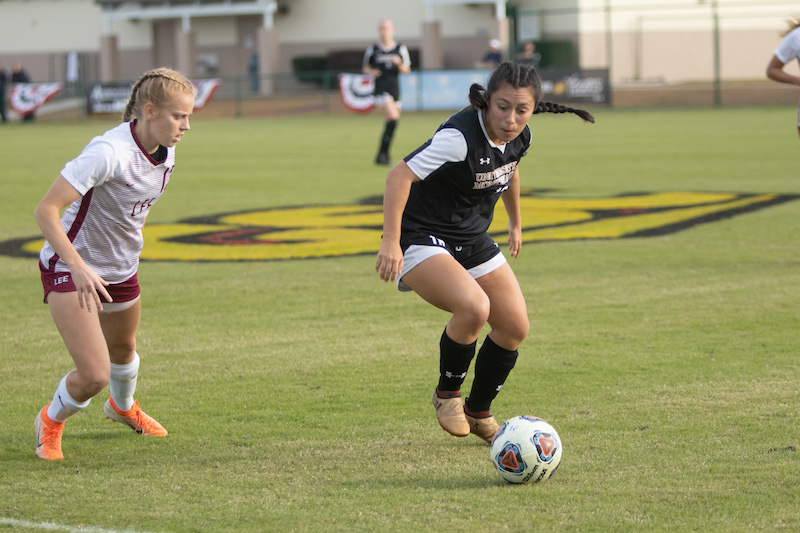 PENSACOLA, Fla. – Down 1-0 to Lee with 12 minutes to go in the Gulf South Conference Tournament championship match, things were starting to look bleak for the Montevallo Falcons.

However, Montevallo showed that it’s not how you start a match that counts the most, it’s how you finish it.

Making a furious comeback, Romee Contreras and Tylor Ring both scored goals in the final 11:59 for the Falcons to rise above the Lee Flames for a 2-1 victory and claim Montevallo’s first GSC women’s soccer championship since 2007.

“It’s one of the most incredible feelings I’ve ever felt,” said Montevallo head Jake Wyman, who is in his first season as the Falcons head coach after serviing as an assistant the previous three years. “This team has invested so much every day, whether it’s in matches or practices or away from the field in film sessions, classroom sessions and academics and everything. This feeling and the achievement and to be able to write our name in the GSC history books is surreal.  Tonight we can say we’re the best in the GSC and it’s an incredible feeling.”

With the win, Montevallo has earned an automatic berth in the NCAA Tournament, which gets under way Thursday, Nov. 21. The tournament field – along with Montevallo’s seeding and first-round opponent – will be announced on Monday, Nov. 18 at 5 p.m. Montevallo and Embry-Riddle (the Sunshine State Conference tournament champion) will be joined by four other schools in the South Regional. It is Montevallo’s first trip to the NCAAs since 2007, when the Falcons went 2-1, losing to Tampa in the regional finals.

“It’s a bit of uncharted territory for us and we haven’t spent a lot of time focusing on (the NCAA Tournament) in the past,” said Wyman. “At a certain point this season, we thought it might be a possibility once the region rankings started coming out. Now, I think the most important things are to get our legs back under us and enjoy it. We don’t want to put pressure on ourselves and just enjoy the rest of this week and get ready once we know who and where we’re playing.”

Montevallo – which lost to West Florida in the 2018 GSC Tournament championship match – found itself down, 1-0, after Lee’s Kelsey Yoder scored on a shot in the lower right corner of the net in the 36th minute. That one-goal lead stood up until the Falcons started their late charge.

“Lee got the first goal and they dominated the first half,” said Wyman. “But there’s two halves to soccer games and we’re thankful for that. We adjusted at halftime and played the way we wanted to play. This was our fifth match in nine days and to have the late surge we had tonight was everything. It says a lot about our team that we could beat two teams like West Florida and Lee back to back. We talked about all year about not wanting to be looked at as a team that was sometimes good and sometimes just OK. We want to be in the conversation with teams like West Florida and Lee on a consistent basis and I think we proved that tonight.”

Montevallo (14-3-4) started its comeback at 78:01, when Allye Darnell took the ball down the right side and sent across the goal mouth. The ball got past the Flames’ goalie, found Contreras on the left post and she put her shot into the open net for her eighth goal of the season to tie the match at 1. After the match was leveled, the Falcons continued their late surge, peppering the Flames (16-5) with shots in search of a championship-winning goal.

The Falcons found what they were looking for at 87:11 when Tylor Ring, who was brought on to replace Darnell on the right wing, took a pass from Kaeri Ward up the right side and lifted a shot over the Lee defenders and keeper into the top left corner of the net to make it 2-1 Montevallo and give the Falcons their first GSC title in 12 years.

“(Darnell) had a big influence in the second half and had that assist,” said Wyman.
“She caused a lot of problems down their left side, but she ran so many sprints and we put (Ring) in there. She’s been a consistent performer for us for four year and she was more than ready for the challenge.”

Ring’s goal was her fourth of the season and she was named the tournament’s Most Outstanding Player. Joining her on the All-Tournament Team were Contreras, Darnell and goalie Annie Mason, who made six saves in the victory.

“It’s been an incredible season,” said Wyman. “I couldn’t have done any of this without all of the girls and my staff. The credit goes to a lot of people. The team stepped up today and it’s a tremendous feeling. I can’t even describe it.”

79′ | Montevallo’s Allye Darnell sends a cross across the goal mouth to Romee Contreras at the left post and Contreras buries a shot in the center of the net to tie the match at 1.

88′ | Taking a pass from Kaeri Ward on the right wing, Tylor Ring lofts a shot over the Lee defenders and into the top left corner of the net to give Montevallo a 2-1 lead.