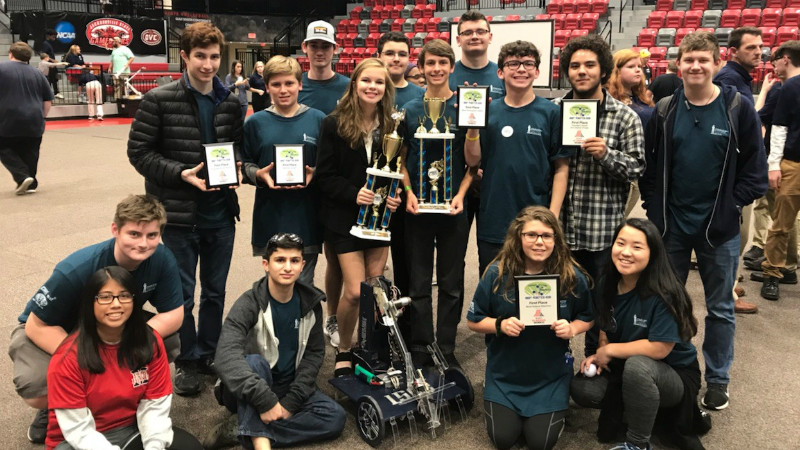 The honors included six first-place awards and one second-place award, enabling the team to proceed to regional competition at Auburn University Dec. 7-8.

“We were one of eight competitors at Jacksonville State University on Nov. 2,” Shaw said. “Our members did a great job and were one of three chosen to go to regional competition. There we’ll face 64 teams from five states. We’ve made it to final competition three of the last four years, so we’re hoping for a good showing next month.”

Shaw explained that the Oak Mountain team created a robot that performed mandated tasks in Jacksonville, and they’ll take the same robot to Auburn, with some modifications.

“The team chose a spy theme this year,” she said. “They chose ‘Threat Level Midnight’ from the television show, ‘The Office,’ and the name of one of its characters: ‘Scarn.’”

“Scarn is a really good robot. He seems to perform everything necessary to excel, and we’re hoping the theme is interesting and memorable to the judges.”

Shaw said in addition to their robot, the BEST team has built a marketing booth as part of the competition and will try to “sell” their robot to the judges.

Shaw said her team of 20 students has been working hard after school and on weekends in their trailers at Oak Mountain Intermediate School.

“I do have a little anxiety about the other competitors,” she said. “Some are homeschooled groups that have time to include robotics in their daily schedule, and some teams are from magnet schools. Our time is more extra-curricular, but I know our Oak Mountain students are working very hard.”

Shaw said many on her team are students of Paula Hughes, who teaches engineering, robotics and career prep at Oak Mountain. Hughes is in her 12th year at the school.

“These are great kids and very creative,” Hughes said. “We’re excited about their trip to Auburn.”

Shaw said her oldest son joined the Oak Mountain team while a freshman and continued until his graduation in 2017. Shaw’s husband, Jack, an electrical engineer, volunteered as a mentor at that time and then she decided to join him. Both of their sons were in the program and their daughter is a current team member.

More information about the upcoming competition, and an instructional video, is available at SouthsBest.org.