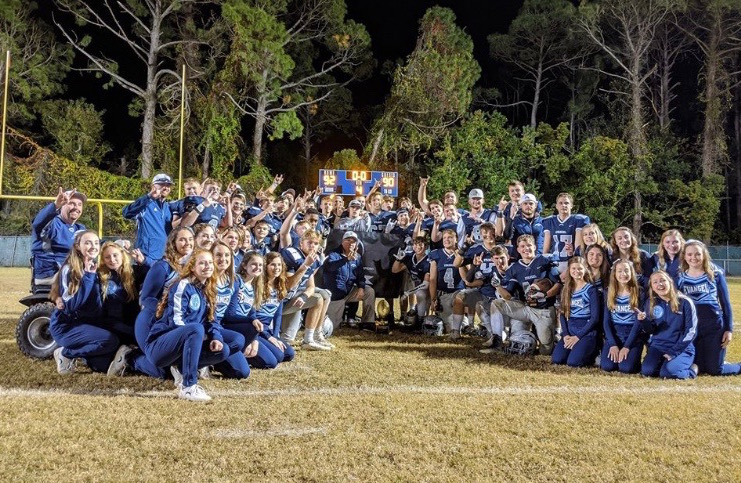 Tied 84-84 in a rematch of a game Evangel won 82-55 earlier in the season, the two teams went to overtime with a title on the line.

On second down of the ensuing drive, Tyler Henderson took the snap and stood in the pocket with plenty of time to find an open man. After surveying the field and pointing a receiver in the right direction, Henderson saw Will Ferrell slide past his defender. Henderson floated a high lofted pass from the 25-yard line toward Ferrell in one-on-one coverage. Ferrell leapt up and snagged the ball right above the defender’s head before falling into the end zone for a touchdown to tie the game at 90-90.

On the ensuing 2-point conversion attempt looking to close out their second consecutive national championship, the Lightning came up with the perfect play call out of a timeout.

Henderson took the snap, faked the run up the middle, while running back Noah Shears slipped through the line and into the end zone with no defender seeing him. Henderson then stopped his run, and pulled off a jump pass to a wide open Shears to convert the game-winning attempt and send Evangel’s players into a frenzy after a thrilling 92-90 victory.

“They work hard together and they show up every day to practice and did everything they needed to this year. I’m so proud of what this group has accomplished.” head coach Tim Smith said just before his players doused him with a Gatorade bucket in celebration.

Henderson ended up finishing the game 23-of-37 for 557 yards and six touchdowns through the air to earn MVP honors. He also added 88 rushing yards and two more touchdowns rushing.

“I honestly just hoped we would come out here and play as a team and play our best game of the season,” Henderson said following his final game with the Lightning. “I couldn’t have asked for it to end any other. I love this team and I love Evangel.”

Ferrell ended up leading the Lightning in receiving with 327 yards and four touchdowns, including what became the game-winning catch. Behind him, Jett Lodge added 187 receiving yards.

It marked a special comeback victory for Evangel, who fell behind 44-32 after the first quarter of action.

In the second quarter, the Lightning inched closer with 16 points thanks to a couple of successful 2-point conversions, while Ezell-Harding couldn’t convert its attempts and ended the quarter with just 12 points.

That sent the game into the half with Ezell-Harding in front 56-48.

And in the third quarter, Evangel’s deficit grew even larger when Ezell outscored the Lightning 14-6 to extend the lead to 70-54 heading to the final period of play.

But with a close-knit group of seniors, led by Henderson, the Lightning had no quit in the final quarter.

Having come back, but still trailing 84-78 with 2:20 left, Lodge put together a strong kick return to the Ezell-Harding 19-yard line to put Evangel in business looking to tie or take the lead.

Two plays into the drive, Henderson hit Ferrell on a short wheel route and Ferrell did the rest of the work sprinting to the end zone to tie the game at 84-84 with 1:28 left to play.

The ensuing 2-point conversion was no good, but the shift in momentum in the final quarter carried over into overtime to help Evangel claim the title.