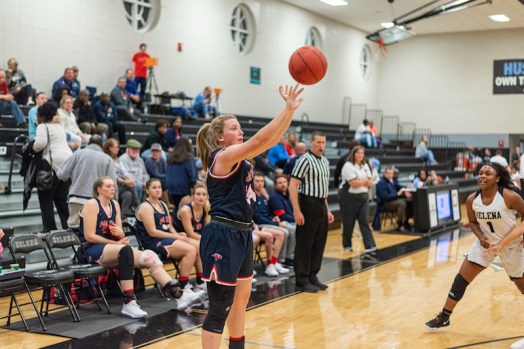 Oak Mountain's Abi Brown (34) led the Eagles with 14 points in a win over Helena on Tuesday, Nov. 19. (For the Reporter/Jeremy Raines) 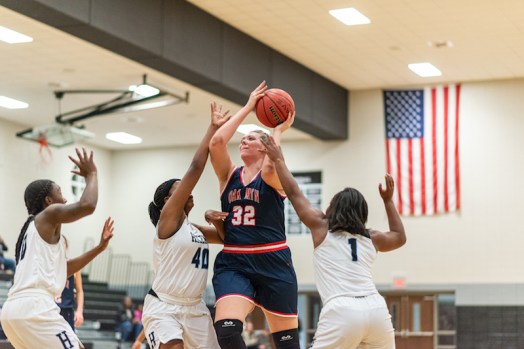 HELENA – Using an inside presence from Hannah Edwards and outside shooting from Abi Brown, the Oak Mountain Eagles were able to outlast the Helena Huskies by a score of 34-28 on Tuesday, Nov. 19.

Brown led the Eagles with 14 points while Edwards finished as the second leading scorer with 13 points despite leaving the game with an injury in the third quarter.

Edwards and Brown accounted for 79 percent of the Eagles scoring as Oak Mountain had just enough to get by the Huskies.

After not scoring a point in the first quarter, Brown finished with 14 as she scored one 3-pointer in each of the final three quarters.

On the flip side, Helena was led by Kya Gardner who had 16 points in the game to lead all scorers.

Unfortunately for Helena, just three players were able to record points as the Huskies missed a number of layups and shots around the basket that Helena head coach Alan Skinner pointed out was frustrating.

“Defensively, I didn’t feel like we did horribly because we held them to 34 points but offensively, we couldn’t do anything,” Skinner said. “We missed 14 layups, missed seven free throws and you lose by four. But a lot of the shots we missed they were right around the rim.”

Despite the offensive woes, the Huskies trailed just 22-18 entering the final quarter where the Eagles outscored the Huskies 12-10 in the final eight minutes without Edwards.

In the final quarter, Brown scored seven of her 14 points and went 4-of-6 at the foul line to help the Eagles hold on for the 34-28 win.