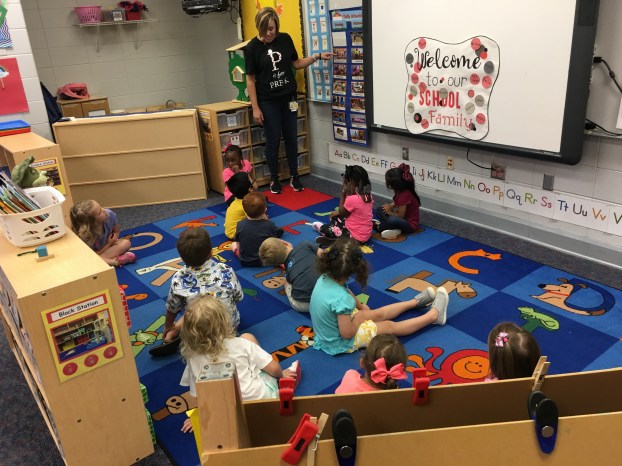 Alabaster City Schools recently opened one new pre-K class at each of its elementary schools. (Contributed)

ALABASTER – Alabaster City Schools now has the ability to accept more students into its pre-K program with the addition of two new First Class Pre-K classes.

One new class was added at Creek View and Meadow View elementary schools, bringing the total number of pre-K classes at each school to three. On Nov. 1, 32 students walked into their first day of pre-K, said Ke’Andrea Jones, ACS pre-K director and federal programs supervisor.

At the beginning of the 2019-2020 school year, a lottery drawing was done to determine what children would be accepted into the pre-k program. Those not selected were put on a waitlist. When the school district learned that it would be the recipient of a grant for two new pre-K classes, the waitlist was used to fill up the classes.

“That’s why I always encourage parents to still go online and apply for a spot in our pre-K program because you just never know,” Jones said.

Right now, each class has 16 students, but the capacity is 18 kids per class.

The classes are funded by two $120,000 grants from the Alabama Department of Early Childhood Education. Each grant required a 25-percent match from ACS that amounted to $60,000 total. Jones said the first-year grants help ensure that the classes are equipped with up-to-date equipment, technology and furnishings. A lead teacher and an auxiliary teacher were hired for each class.

“We make sure that our pre-K teachers have the same resources available to them as all other teachers,” Jones said.

“We’re very appreciative of the partnership we have with the Alabama Department of Early Childhood Education,” ACS Superintendent Dr. Wayne Vickers said. “First Class Pre-K is one of the most outstanding pre-K programs that I’ve ever seen and we’re so excited to be able to expand our programs at CVES and MVES.”

By GRAHAM BROOKS / Staff Writer PELHAM – After being closed since May 31, the Chick-fil-A located at 320 Cahaba... read more