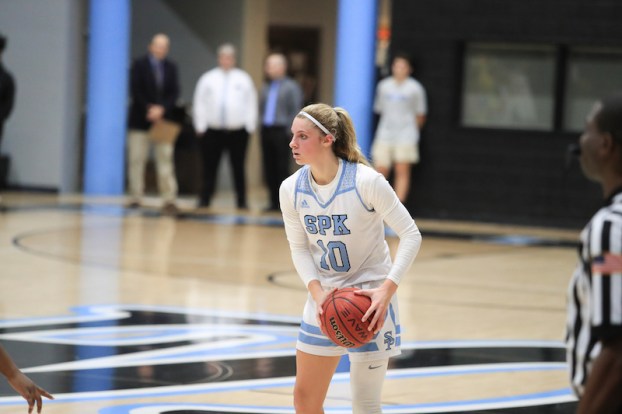 The Spain Park girls’ basketball team hit 11 3-pointers to take down Tuscaloosa County in dominant fashion on Thursday, Nov. 21. (For the Reporter/Dawn Harrison)

HOOVER – Behind 11 3-pointers and five different scorers with at least eight points, the Spain Park Jaguars’ girls basketball team was able to pull away for a dominant 62-23 home victory against Tuscaloosa County on Thursday, Nov. 21, to improve to 4-1 on the season.

The Jags held the Wildcats to single digits in every quarter of play, while the offense scored 36 first-half points to pull away for a strong 36-13 halftime lead, never looking back.

In the opening quarter of the game, Spain Park started out somewhat slow for a game the Jaguars dominated. They scored 13 points and were 3-4 from the free throw line with two 3-pointers made, but the defense gave up a game-high eight points in the quarter thanks to four different scorers from Tuscaloosa County.

That was only a disappointment in Spain Park’s eyes, as the Jags felt as if they left some opportunities on the floor.

But in the second quarter, more started to go their way and they caught fire from beyond the arc. It was just one player that contributed in the period either. Five different players hit 3-pointers in the quarter to pave the way for a 23-point second quarter.

Spain Park also flipped the script defensively in the frame and held the Wildcats to five points on just one made field goal to outscore them 23-5 in the period and take a 36-13 lead into the break.

Coming out of the half, the Jaguars didn’t skip a beat. The scoring wasn’t quite as balanced in the third quarter, but seven points from Sarah Ashlee Barker as well as four from Haley Russell, three from Mackenzie Culpepper and two from Jaycee Haynes led to 16 points on the offensive end.

Defensively, the Jags continued to play lights out, allowing just two field goals and six points in the quarter to extend the lead by 10 more points to 52-19 heading to the final quarter.

With a running clock in the final quarter, scoring was limited, but several players took advantage of their time for the Jags, as they still scored in double digits with 10 points. Tuscaloosa County, on the other hand, could only muster up four points in the limited time, which led to Spain Park closing out the 39-point win in front of the home crowd.

Barker led the Jags with 18 points in the game without playing in the latter part of the third quarter or any portion of the final quarter. Behind her, Russell added nine points, while Haynes, Culpepper and Kamryn Corey each had eight in the win.