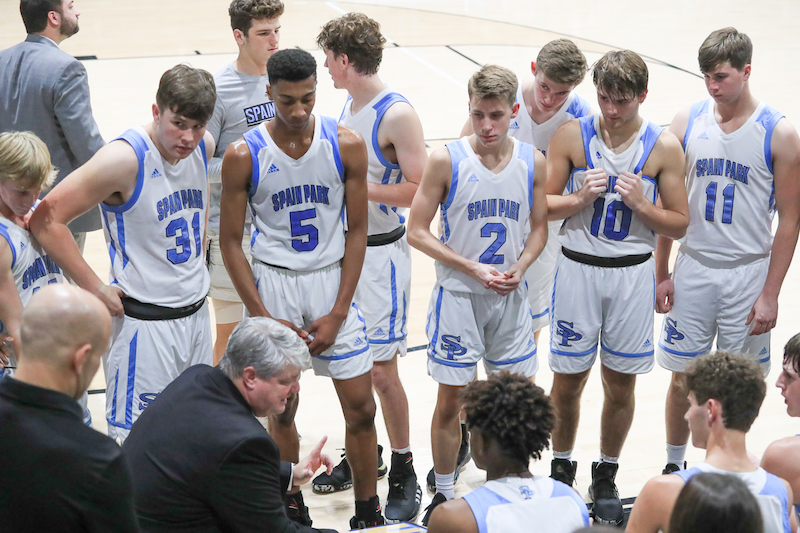 The Spain Park Jaguars put together a strong team effort to take down previously unbeaten Tuscaloosa County on Thursday, Nov. 21. (For the Reporter/Dawn Harrison)

HOOVER – The Spain Park Jaguars started the 2018-19 basketball season with a 2-2 record, but went on to lose their next game, which became part of an 11-game losing streak.

On Thursday, Nov. 21, the Jags entered game four of the 2019-20 season 2-2 yet again, but this time, instead of a loss sparking a losing streak, the Jaguars pulled off a 48-33 home victory against Tuscaloosa County to pick up their second win in a row and improve to 3-2 on the season.

The win also marked a victory against a previously unbeaten Tuscaloosa County team, who was 4-0 with what looked to be a more athletic and taller team.

The Jaguars, however, took advantage of a dominant defensive performance that saw them limit Tuscaloosa County to just nine points the entire second half.

But the Jags started their strong night on the offensive end in the opening quarter with a quick 8-1 run that featured five points from Braden Diclemente and a Josh Harrington 3-pointer.

The Jags continued to dominate after that, eventually putting together a 15-3 run to start the game thanks to offensive rebounding and a pestering full-court press that was causing the Wildcats tons of issues offensively.

Eventually, however, Tuscaloosa County was able to capitalize on some missed baskets by sprinting on the break to prevent the Jags from setting up any sort of pressure.

The Wildcats went on to end the half on a 12-2 run due to that shift in momentum, which made the score 17-15 heading to the second quarter.

But somehow the Jags didn’t let that impact their demeanor early in the second quarter.

They eventually started the period on a 9-2 run after the offense started making baskets again, which allowed the full-court press to cause issues for Tuscaloosa County again.

The Wildcats were again able to find an answer in the form of a 9-2 run themselves, which cut the deficit back to two points at 26-24. From that point, however, Spain Park got a free throw from Harrington, a nice post move from junior Jayson Webb and an offensive up-and-under put back from J.R. Lambert to close the half on a 5-0 run and take a 31-24 lead into the half.

At the half, both teams were playing strong defensively, but went into the locker room and made more defensive adjustments.

Those changes led to a low-scoring third quarter with the first field goal not coming until Colin Turner hit a layup 2:30 into the period. That was the only basket for the first four minutes of the frame.

But after a turnover with 4:01 left to play in the period, Diclimente hit back-to-back 3-pointers for the Jags, before Blake Hay hit a 3-pointer himself just ahead of the buzzer to put them on top 42-28 heading to the final quarter of play.

That defensive mindset carried into the final frame as well. The Jags looked to control the clock and win the game at the free throw line, while they also continued to play sound defensively, which kept the period from seeing a ton of points.

Tuscaloosa County cut the game back to 10 points at 43-33 with 2:30 left to play, but Spain Park went on to close it out with a 5-0 run over the final two minutes to complete the 15-point victory.

Diclemente led the Jags with 11 points in the win, while Harrington added nine. In all, 10 different players scored and the entire team dominated defensively, which was the key aspect of the victory.

Tuscaloosa County was led by Dijon Wise with nine points, while seven total players scored in the game, including six apiece from Bryson Hall and Arsten Petamy.